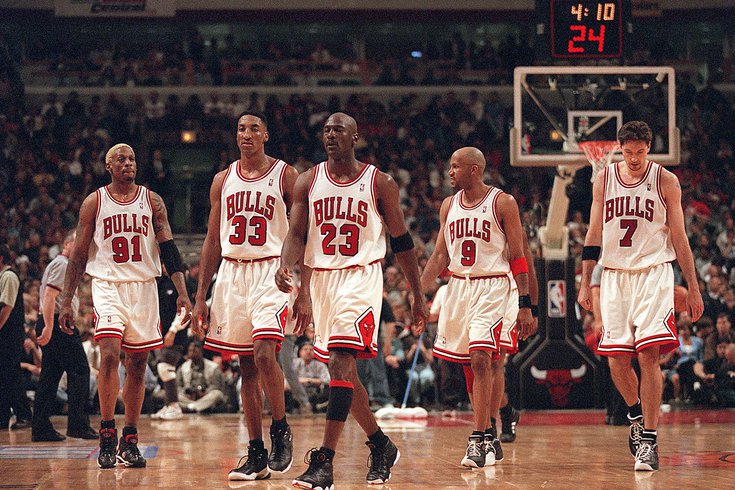 From left, Dennis Rodman, Scottie Pippen, Michael Jordan, Ron Harper and Toni Kukoc were big parts of Bulls teams that won three straight NBA titles from 1996 to 1998. Jordan and Pippen were members of the first "three-peat" team, which won titles from 1991 to 1993.

The first two episodes of The Last Dance, a documentary about Michael Jordan's life and the 1997-98 Bulls, have finally arrived, and they were quite a treat for everyone missing sports in their day-to-day lives. There is a ton of ground still left to cover after the first two hours of a 10-part series, but so far it's been an absolute delight.

If you happened to miss it on Sunday, I would advise you to check it online or on DVR asap, and I'll leave you with some of the things that really jumped out at me on first watch.

One of the very first things you hear in what is shaping up to be an all-time documentary is a claim from Bulls owner Jerry Reinsdorf, who admits all these years later that Chicago's brain trust was considering a rebuild in the summer of 1997, rather than gearing up for another run at the title. I had remembered that the final season in Chicago was contentious, but that is, shall we say, absolutely freaking insane.

Look, this was not some rinky-dink fluke title winner that had been put together with rubber bands and string. This was the team of the decade for all of professional sports, still in the midst of one of the greatest runs of all-time, with the only hurdles being age and having to pay them handsomely to give it another go. This isn't a team that was showing signs of wear-and-tear, they had just climbed the damn summit.

And yet while the Bulls were holding press conferences following their NBA Finals victory, Jordan, Pippen, and the rest of the gang had to answer questions about what the future held, not because they were set on retiring but because ownership and management had made it clear they might be willing to move on from one of the best teams of all-time while still performing at peak level.

The constant in Chicago decades later is Reinsdorf, who has been able to hide behind loathed figures in his front offices as the Bulls franchise has gone from the NBA's premier team (and perhaps America's premier team) to a league footnote. Chicago is an incredible city and there was a generation of players who associate the franchise with greatness. They should be a yearly destination for elite free agents and a fixture at the top of the Eastern Conference. They're a joke in large part because of the owner.

(Jordan, by the way, had an elite quote to offer on the subject: "The Cubs have been rebuilding for 42 years.")

The galvanizing force of the 1997-98 Bulls appears to have been their collective hatred for GM Jerry Krause. Within the first two hours of this documentary series, we got to sample the following:

Imagine winning five titles with three men at the forefront of those championships, one of those people being the head coach, and then walking into that coach's office in the offseason and saying he could go 82-0 and would still be done as the coach after the season. Krause openly recruited Tim Floyd, who would go on to fail spectacularly as a Jackson successor, while Jackson was still the coach of the team.

And Jordan, in the process of putting a cherry on top of an all-time great career, had to answer questions at a 1997 NBA Finals presser about playing under another coach. As the documentary pointed out, Jordan was pretty blunt about the whole situation.

"I will not choose to play for another coach," Jordan said at the time.

The dysfunction went all the way back to Jordan's second season in Chicago, when Krause was one of the leaders behind a load management/minute restriction program for Jordan coming off of a navicular injury. After the Bulls made the playoffs with a key late-season win in 1986, The Last Dance claims they took a key and locked the door to the locker room after the game so Krause could not get in, walling off the team to celebrate the victory.

This goes far beyond something like Joel Embiid's pot shots at Bryan Colangelo following his departure. There was constant, visceral anger between the players and management, and it's amazing that setup worked for as long as it did.

Scottie Pippen was criminally underappreciated — and probably still is

Pippen's journey from Arkansas to the NBA is one I was reasonably aware of, but the segment of the documentary on his background and upbringing brought some things to light I was personally unaware of. The most glaring example: I knew he hit a major growth spurt in college, but I had no idea he was only an equipment manager for the team prior to adding another six inches.

(Let that be a lesson to a lot of kids out there — don't give up on your dreams too soon. You might not grow six inches in a summer, but you can work toward what you want on your time and terms.)

That backstory, however, had a bit of a tragic twist. Fearful of getting hurt and jeopardizing his ability to take care of his family back home in Arkansas — his father and one of his siblings were both confined to wheelchairs — Pippen signed a seven-year, $18 million contract with the Bulls that carried him through basically his entire professional prime. This resulted in him being the sixth-highest paid player on the 97-98 Bulls, trailing Jordan, Ron Harper, Toni Kukoc, Dennis Rodman, and Luc Longley on the cap sheet, not even in the top-100 for the league.

I was young during Pippen's peak, but whether you've gone back the archives, experienced Pippen in real-time, or are getting to know him for the first time, his on-court ability was outrageous. In the 93-94 season without Jordan, Pippen turned into Chicago's leading man and a legitimate MVP candidate, powering the Bulls to 55 wins (and fittingly, some more drama in the playoffs.)

The biggest farce of the documentary so far was Reinsdorf's present-day claim that he tried to dissuade Pippen from signing that long-term deal when he put pen to paper in the early 1990s. An owner trying to step in out of the kindness of his heart to talk one of the best players in the league out of a team-friendly contract? The next time that happens will be the first.

Understandably, Chicago's refusal to budge on this stance over time became a sore spot for Pippen and eventually led to a public trade demand during his final season with the Bulls, which is how the second part of The Last Dance closed. Before we got to that point, Pippen was open about the fact that he had delayed surgery so that he could rehab on company time during the 97-98 season.

His quote summing it all up will live on for quite a while if I had to guess: "I'm not going to f**k my summer up."

In the week leading into the documentary, Jordan laid the groundwork for some potentially explosive revelations, claiming he was fearful people might think he's a bad person after watching this. So far, it seems The Last Dance is more concerned with building up the mystique rather than trying to get to the heart of the real Michael Jordan.

The Last Dance teased at it early, with Jordan pressed on how wild things got during his early days in the NBA, when the Bulls were (allegedly) referred to as a "traveling cocaine circus," one that he says he happened to just stumble into during an early road trip during his rookie year. But he slid past a scene of women, blow, and weed quite casually, and that anecdote mainly served as a prop to highlight Jordan's competitiveness. To let him tell it, he chose the game above partying.

We did, in fairness, get glimpses of his notorious competitiveness in practice sessions, with Jordan lighting into Ron Harper for late rotations during a scrimmage. And as Pippen joked with young teammates that an exhibition win in Paris counted as their first championship, Jordan was initially unmoved, staring daggers in their direction.

"Michael Jordan is the only player that could ever turn it on and off, and he never frickin' turned it off," North Carolina head coach Roy Williams said at one point in the middle of the first episode, and if that doesn't sum up how people view Jordan, nothing else will.

But so far, this seems like an example of how the victor gets to write the history book. The anecdotes about his gambling are about golf outings that preceded big-time performances, like his 63 points in the playoffs against the Celtics. Will we get an inside look at Jordan's rumored trips to Atlantic City during playoff battles against the Knicks, spending long hours at the tables before getting ready for Patrick Ewing and Co.? It's too soon to tell.

Even if this turns out to be a Michael Jordan biography that skims past potential controversy, I am all in. This has been a treat so far.