PhillyRank Extra: Projecting the city's top 10 pro athletes that are 25 and under 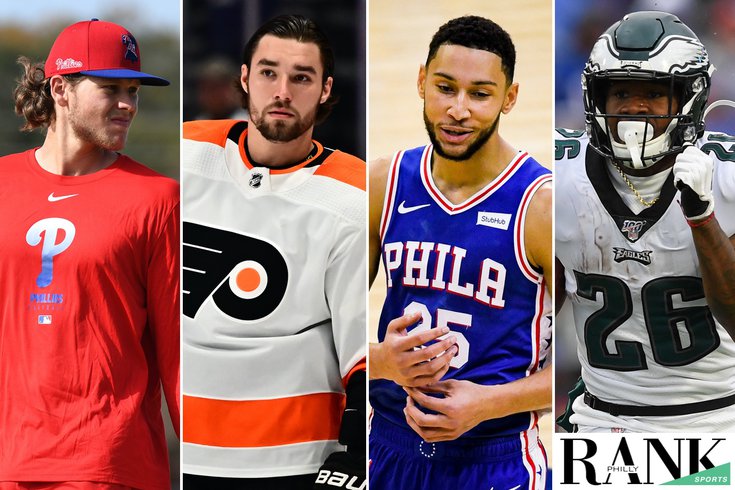 A look at some of the top young athletes in Philadelphia: Alec Bohm, Ivan Provorov, Ben Simmons and Miles Sanders.

We have spent a lot of time and energy ranking the players currently making an impact on the five major sports teams in Philadelphia. Let's pause for a moment and look toward the future (a welcome exercise in times like these).

Below we've trekked to rank the top 10 future stars in Philadelphia sports, combining what they've shown us on the field already with what we project they could achieve in the next few seasons. To be clear, this is different than what we were looking for in PhillyRank, which was judged on how good the players are right now, so some appear in a different order.

We fully expect all of the below athletes to break through with their organizations in the next year or two, and many of them could become top players at their respective positions. We do know, and admit, that including a pair of Phillies prospects on our list is risky.

Our Sixers' writer Kyle Neubeck, when asked for thoughts on our rankings said: "My only contribution is that including baseball guys is a complete crap shoot, these dudes might just suck in the big leagues."

He then went on to cite Phillies former outfielder Dominic Brown, the former top prospect in baseball who is... no longer playing baseball.

We'll do our best to avoid falling into the Dom Brown trap as we present our list. But first, here are a few honorable mention prospects who fell just short of our top 10:

Without further ado, here are the top 10 pro athletes in the city under the age of 25, with their overall position on our full PhillyRank list in parentheses:

Thybulle has played in 49 NBA games as a rookie and has shown flashes of being an absolute terror defensively. His number per 36 minutes, with regard to steals and blocks, are absolutely incredible for a player his size. However he has struggled to be consistent as a rookie and has played over 30 minutes in a game just six times. He's eclipsed 10 in game score (a metric measuring the all around contribution of a single player in an NBA game) just four times. In 26 games played in November and December, Thybulle shot 52% from three. The rest of the year, he shot just 26%. He has less than a single NBA season under his belt and will continue to improve.

With the 2020 baseball season in doubt, and looking to be shortened if it happens at all, one of the few Phillies players who stands to benefit it Howard, who is the top pitching prospect in the entire farm system. He was invited to spring training back in March after he combined to go 3-1 with a 2.03 ERA in four different levels of the minor last season. In camp, manager Joe Girardi and the Phils front office were worried about unleashing the rigors of a 162-game season on the would-be rookie, who has yet to exceed 112 innings in a calendar year. Howard also had an early spring injury scare, one that is now firmly in the rearview. With the Phils unclear on their fifth starter, Howard could make the jump to the bigs this season.

Was Barnett a good first-round pick? The jury is still out, but the ferocious lineman has certainly shown flashes of brilliance. He had 6.5 sacks last season, second to only Brandon Graham and also had 22 QB hits, the most of any Eagles defender. His love for hits did cost the Eagles dearly, however, as he accumulated three unnecessary roughness penalties, the most in the NFL and 65 penalty yards total (second behind Rasul Douglas). Barnett had his fifth year option picked up early, so he is certainly not going anywhere anytime soon, but 2020 will be a big year for Tennessee's all-time sack leader.

Goedert was an Eagles fan-favorite before he ever put on an Eagles uniform, as the team traded up ahead of the Cowboys to take the Texas-named pass catcher. In his first two years with Philly, he's shown himself to pretty much be Zach Ertz Jr. Goedert can block and has a little speed, but he's proven most valuable as a safety valve in the Eagles offense as the team runs two-tight end sets regularly to get the most out of their NFL-best TE tandem. Goedert could ultimately replace Ertz in two seasons if they choose not to bring him back.

Provy has been the Flyers' iron man as he hasn't missed a game since being called up for the first time prior to the 2016-17 season. In addition to being a minutes-eater, Provorov has shown a knack for offense, as he is the leading D-man with 36 points. The Flyers happen to lead the entire NHL in defenseman scoring, which is thanks in large part to Provorov. He's always firing on the net, as his 150 shots this season are fourth on the entire squad. The Russian native will be Philly's blue line anchor for seasons to come.

Sanders led all rookies in yards from scrimmage last season and if there had been a 17th game, perhaps he would have won rookie of the year, as he got better as the 2019 season went along. Early in the year, Sanders did a lot of his damage via the screen, or other passing plays as he split time with Jordan Howard, but after Howard got hurt later in the year, he had his best rushing outputs of the year in Week's 12, 14 and 15. The Eagles' depth chart at running back right now is pretty bare, which is a testament to their confidence that he can carry the load without needing a big name running back to spell him in 2020.

Konecny was the Flyers' lone All-Star this past winter and he's broken through as their top goal scorer in what seems like the blink of an eye. He is small and agile but can seamlessly work alongside veterans like Claude Giroux and Jake Voracek. He is a skilled puck-handler and seems to be near the net with great frequency in his fourth NHL season. The Flyers have 89 points right now, and according to hockeyreference.com, Konecny has contributed 6.7 of them (via their point share stat) — a number tied with goalie Carter Hart for second on the team.

Bohm is the No. 1 prospect in the Phillies system and the top third base prospect in all of baseball, according to MLB.com. In spring training, Bohm was making a serious case for the Phils to make room for him on their 26-man roster, hitting .409 in 13 games. This, after he hit .305 with 21 homers and 80 RBI in 125 games, split between Single-A, Double-A and the Arizona Fall League. Bohm has a bat the Phillies could desperately use, but his defense is the only thing currently holding him back. When the baseball season resumes, it will be interesting to see if they trust his glove enough to call him up, or if they'll give him a little more time to develop in the minors.

Let's begin by pointing out, again, that Hart is just 21. In his second NHL season, the Canadian net minder has 24 wins, a top 10 number in the NHL. He has a 2.42 goals against average, another top 10 stat. He also has 25 quality starts in 43 tries, tied for eighth best in hockey. All of this while compiling nine "really bad starts," the third worst in the game with a rather mundane .914 save percentage. All of this points to one conclusion — when he gets just a little more consistent, it could be the best goalie in the NHL. He has that potential.

What more can we say about Ben Simmons that readers of this article don't already know? In addition to making his second All-Star game last season, the former No. 1 overall pick leads the NBA in steals this season, and is in the top five in assists and in the top 20 in rebounds. He has an all-around game (except for, you know, not shooting the ball) and has 28 career triple doubles — three behind John Havlicek for 13th most in NBA history. Simmons is the best athlete under 25 in the city and it isn't close. He isn't potential, like the rest of this list, he is a proven result, and one who will only get better.