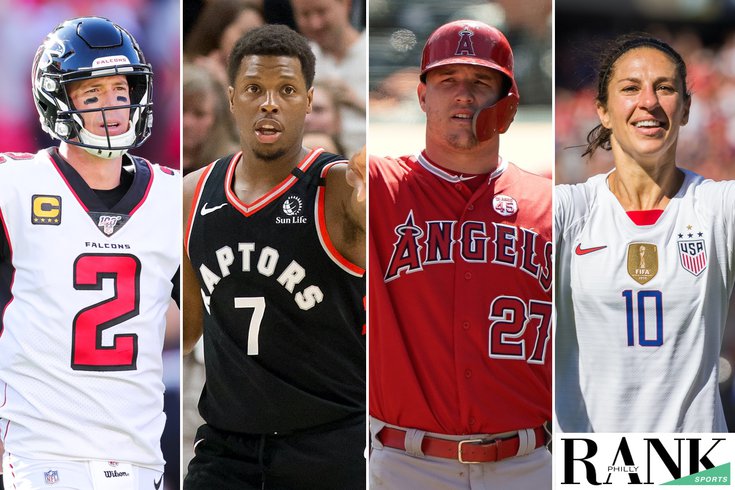 Matt Ryan, Kyle Lowry, Mike Trout and Carli Lloyd all made our list of the best athletes from the Philly area.

The list of greatest athletes from Philadelphia — all time — boasts some of the best to ever lace up sneakers from Wilt Chamberlain to Kobe Bryant, to baseball hall of famers Roy Campanella and Mike Piazza.

The list of current sports stars who hail from the city is a little less distinguished, but still an interesting cross section of sports (and gender).

Philly is known for hoops, which is why with four basketball players, it's the most popular sports on this list. But the area produces a lot more than just stars in basketball.

With our regional net cast a little bit further from the city (to around 50 miles or less), here's a look at our picks for the 10 best Philly-bred pro athletes playing right now:

(*Note: This list does not including non-team sport athletes who may hail from Philly).

Morris has played for five NBA teams, and if the league does re-start he may have his best chance at a title this postseason with LeBron James and the Lakers. He and his twin Marcus (who is the better of the two... more on that later) went to Prep Charter in Philadelphia. Morris is a long power forward known for his defense, but he's also a frequent and sometimes potent three-point shooter. Morris is about as good a role player as you can get in the modern NBA.

Hailing from Exton PA, Ryan played high school ball at William Penn Charter in Philadelphia before eventually leading the Falcons to a Super Bowl berth a few years ago. He was named NFL MVP in 2016 and is perennially among the second tier of NFL QBs every season, as he posted his ninth consecutive season of 4,000 yards or more for Atlanta in 2019. His production doesn't show any signs of slowing down even as he plays deep into his 30s.

The Texans often injured but wildly talented outside receiver attended Roman Catholic HS before committing to Penn State (but he quickly decided to go to Notre Dame instead). In Houston, Fuller has shown immense catch radius and has made a bevy of spectacular plays, but his lack of consistent health is why he is slated just 8th on our top 10. Fuller has missed 22 games to injury over his first four NFL seasons.

Morris has had a very similar career to his twin brother, an NBA journeyman who has played for six teams now. His most recent transaction sent him to the contending Clippers from the lowly Knicks a few months ago, where he is now playing in the same city as his brother. The former Jayhawk is having his best NBA season ever and is shooting lights out from three (or was, before the league shut down).

Will Godwin be even better with Tom Brady throwing him the ball after his breakout season in 2019? Godwin — who was born in Philly but attended high school in Middletown, DE — was a Penn State standout before being picked by Tampa with a third round pick a few years ago. He and Mike Evans proved to be one of the best WR tandems in all of football last season and Godwin's production looks poised to continue in 2020.

You may know Lloyd as that girl from South Jersey who drills field goals at Eagles training camp. But she's also, you know, a 123-goal scorer for the U.S. Women's National Team, a two-time World Cup champion, a two-time Olympic gold medalist and one of the greatest American women's soccer players of all time. Even at the age of 37, she's still showing she has game, playing for Blue Sky FC in the NWSL. 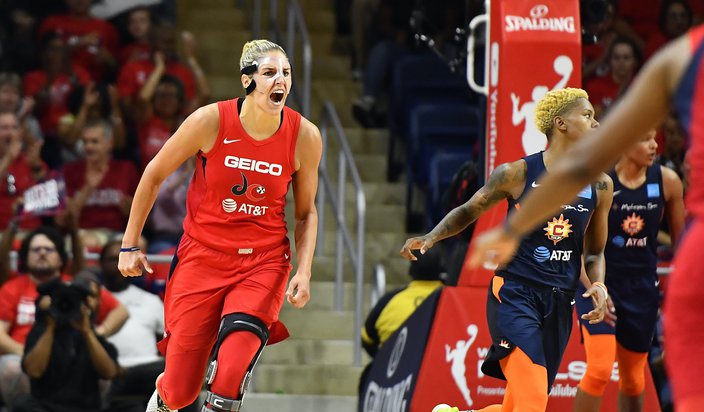 Delle Donne is one of the best WNBA players in the league right now, and is fresh off her first career title with the Mystics this past season. She grew up in Delaware and may be the greatest female athlete ever to come from the state. Famously, she left UConn to play for the Blue Hens, is now a multi-time MVP and has led her entire sport in scoring.

The former Villanova standout and Cardinal Dougherty alum had quite the season in 2018-19, making the fifth of his six consecutive All-Star games and teaming with Kawhi Leonard to bring Toronto its first ever NBA title. Lowry continues a proud Philly-born basketball tradition of being a "tough" player. He's the best basketball player from the Philly-area currently in the NBA.

"Johnny Hockey" grew up watching the Flyers as his hometown team from Salem, NJ (he attended Gloucester Catholic HS), just under an hour from the city. He burst on the scene after the Flames took a chance on the undersized 5-foot-9 winger to make his first All-Star game at just 21 back in 2015. Last season (in 2018-19), Gaudreau finished one point shy of 100 with 36 goals and 63 assists. His 2019-20 showed a bit of a decline in production before the season was halted.

When all is said and done, Trout might give Chamberlain a run for his money as the best athlete ever born from the Philadelphia area. As the only baseball player in our top 10 (we considered adding Paul Goldschmidt, who was born in Delaware, but he spent most of his childhood in Texas), Trout is the no-brainer No. 1 on this list. Trout is already 86th (ever) in career WAR with 72.8 — higher than more than 100 players already in the Baseball Hall of Fame, including Derek Jeter and Jackie Robinson. Trout, in nine years, has led his league in stolen bases, RBI, total runs scored (four times), walks (three times), on base percentage (four times) and slugging percentage (three times). He's also led the American League in WAR seven times. He's also won the American League MVP three times, including in 2019 — and finished second three other times. And yeah, he's still just 28.