How does in-game music impact the Sixers' offense? A data-intensive study

No genre of music is linked to a sport quite like hip-hop is with basketball. Among their many standout features, Michigan's Fab Five used to break team huddles by yelling, "Let your nuts hang!" in homage to the legendary Geto Boys, and over the ensuing decades the NBA has transitioned from a league actively rejecting hip-hop culture to one embracing it at every turn, even when it manifests in insanely long All-Star Game introductions.

Philadelphia was basically ground zero for this marriage. Allen Iverson cut Reebok ads with Jadakiss and drew the ire of then-commissioner David Stern (amongst others) with an unreleased album packed with controversial lyrics, claiming the league's MVP, "has done a disservice to himself, the Philadelphia 76ers, his teammates, and perhaps all NBA players" with his rapping under the pseudonym Jewels.

Decades after Stern rejected Iverson and hip-hop at large, you can hear the instrumental for the most enduring song from that project, 40 Bars, blaring through the Wells Fargo Center speakers on gameday. Music is a staple of live sporting events around the world, but in basketball, it has become a part of the actual product, songs echoing through the gym during offensive possessions for the home team. Each franchise and arena has a different playlist of go-to songs. If you watch a Utah Jazz broadcast, most cuts you'll hear are decidedly retro, while in Boston the in-arena offerings are more sparse.

As part of a warm-up ritual, the role of music has always made sense, though the utility changes from person to person. During a pre-draft interview, Jahlil Okafor once told me he liked to listen to artists like John Legend or Alicia Keys before games, mellowing out the competitive energy a bit. Up until this season, the first part of Joel Embiid's pre-game routine was waltzing to the free-throw line to the tune of "Magnolia" by Playboi Carti, grinning and shimmying before his shooting program. And Ben Simmons even released his personal pregame playlist last season through Apple Music, featuring a mix of artists from Meek Mill to Luther Vandross to Metro Boomin.

The role of music during a game was another matter entirely. Late in a win over the Phoenix Suns in the fall of 2018, I half-jokingly tweeted an observation about their team success when a Biggie classic played during an offensive possession.

After some debate among members of the press about the veracity of that claim, it was suggested I should "verify my sources" and find out if this is actually true. What transpired from there was a season-long quest to figure out if any songs that played had a noticeable impact on Philadelphia's success on the floor.

What I discovered, with all personal biases and fandom set aside, is that 50 Cent should be the only artist allowed to be played during Sixers games.

Many of you reading this story have probably read one of my Instant Observations columns before, the goal being to give you a speedy, in-depth assessment of what I just saw and thought during a Sixers game. This evolved from my work writing about the Eagles here, as the early days of my Sixers coverage at PhillyVoice centered predominantly around next-day reading (whereas now we just do both).

One of the habits I maintained from the next-day focus was note-taking/play-logging in a document outside of my recaps. They tend to look something like this, split up by quarter with player names, timestamps, and occasional expressions of shock or horror at what I'm watching: 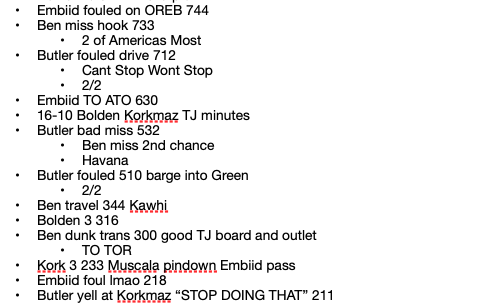 What you'll notice in this set are some song titles under the initial play note, because yes, I started to log the result of every single possession where a song was played, tracking for turnovers, made baskets, fouls drawn, you name it. Up until I reached a full season's worth of data (so 41 home games), I did this for every single game, eventually compiling all of the data during a dead period of the calendar.

Some of it had to be thrown out in the interest of getting rid of anything with sample size I deemed too small. While that got rid of some absolute jams, a good data journalist knows not to contaminate the research with faulty results.

As a frame of reference before we get going, here are some of the NBA's leaders in volume in different play type categories, along with their average points per possession on those plays, to compare the numbers to:

One thing that became clear right away is the absolute dominance of New York-based rap during Sixers games. Of the 37 songs played enough to represent a statistically significant sample, 21 of them originated from Big Apple in some form or fashion. On a basic level that makes sense — it's one of the genre's major hubs and the simple, hard-hitting instrumentals lend themselves well to background music at a basketball game.

What took me by surprise was the superiority of two artists: Jamaica Queens native 50 Cent, and legendary DJ/MC duo Eric B. & Rakim. The Sixers' best performance by a considerable margin came when 50 Cent's pop turn "Candy Shop" played during offensive possessions, producing a staggering 2.13 points per possession, and 50 was his own runner up in the position for the top spot.

All told, New York rap dominated the top of the leaderboard with the eight most successful offense/song pairings at the Wells Fargo Center from late 2018 to late 2019. Atlanta was the first major region to break the New York stranglehold, with Offset and Outkast rounding out the top-10 from a comfortable distance behind the leaders.

(As a sidebar, "I Got A Story To Tell" cracking the top-five is amusing to this writer, as it is a song that alleges Biggie slept with the girlfriend of a player on the Knicks and later robbed him at gunpoint to get out of the situation. In 2016, Fat Joe alleged the player in question was the late Anthony Mason, may he rest in peace.)

The major plot twist during this scientific journey? My original tweet that started it all could not have been more off-base. "Hypnotize" ended up being a kiss of death for the Sixers from that moment on, a spin-off of the announcer's curse I suppose, leading to an assortment of bricks, turnovers, and good fortune for whoever the road team was on a given night.

Biggie's classic single from his sophomore release was only topped in ineptitude by one song, and by the slimmest of margins. "Woo Hah!!!" by Busta Rhymes stands alone at the bottom of the barrel, a song that should not be allowed to be played within 48 hours of a Sixers game for the rest of time.

Once again, New York dominates, capturing eight of the bottom 10 spots on the list. It's a city that doesn't settle for mediocrity, I'll give them that.

With this information in mind, I did earnestly try to look for patterns and hard-to-notice things that might have a subtle impact on performance. The first place I thought to turn was beats per minute (popularly shortened to BPM), which is a number many DJs track to sequence their mixes and make sure people at a bar or a club aren't being thrown completely off-kilter during transitions.

But there was no real correlation there, partially because there wasn't a lot of variance from one song to the next in the data sample. A few notable exceptions aside ("So Fresh, So Clean" by Outkast and "I Got 5 On It" by Luniz), most songs hovered between 95-105 BPM and were spread evenly across the spectrum. 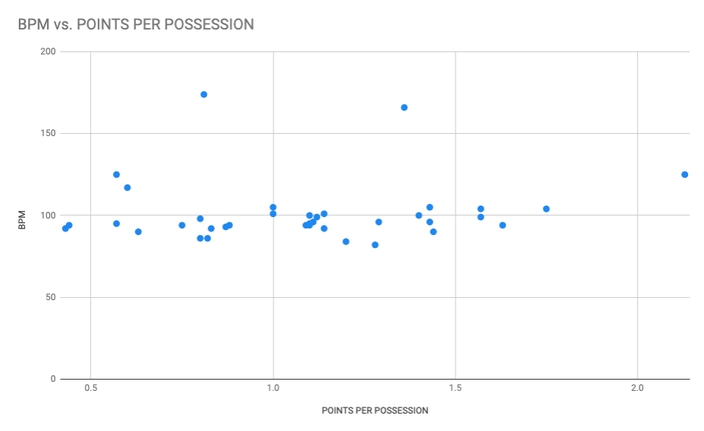 Having ruled out some of my most prominent theories, I figured I should ask the people who actually might be impacted by this whether they had any explanations of their own.

No seriously, turn that off

In the interest of serious data journalism, I spent downtime during the same year period asking an assortment of players with different tastes and playstyles whether they thought something like this had any impact on their games. There were a fair amount of furrowed brows (rightfully so) before I presented them with any data, and most went on to proclaim that it was just part of the background noise at this point.

JJ Redick pointed out that his college experience was particularly helpful in moving all of the noise into the background, having spent his college days in the ACC as one of the most hated players in the country. When your home games are in front of the Cameron Crazies, and every individual fan at a road arena is out for your blood, whether or not Snoop Dogg is on isn't of too much concern.

But some attitudes were changed once the data was presented to each player. Just as there were variations in the pre-game listening habits of players, there were varying levels of success for different players with music or no music on. Almost all of that can be explained by some concrete basketball reason (skill, shot quality, or just plain old luck), but that wasn't always relevant at the time.

A specific example — during possessions where "Nothin' But A G Thang" by Dr. Dre & Snoop Dogg played, T.J. McConnell might as well have been a giraffe on ice skates. In four possessions logged by PhillyVoice with McConnell at the helm and the classic Dre song on the speakers, McConnell managed not one, not two, but three turnovers.

Asked by PhillyVoice whether he had any additional thoughts now that he had this new information, McConnell was blunt.

"They better not play that f**king song ever again," McConnell told PhillyVoice. "That shit's gotta go."

In less colorful language, others agreed that Busta Rhymes is no longer welcome in Wells Fargo Center.

With that, I present to you the full data set from this in-depth study, in the hopes that one of you may unlock the mystery of it all. 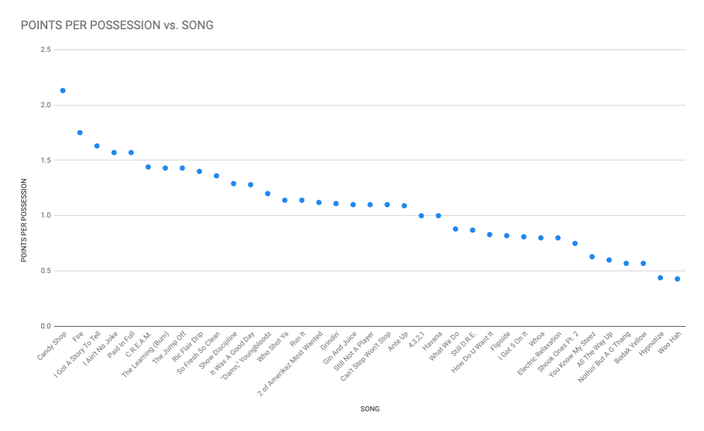 (If that image isn't clear enough on your device of choice, this link should help you out.)

I leave you with links to each song listed in the sample, if not to study then at least to listen to. Rap music is precious and should be shared by all.