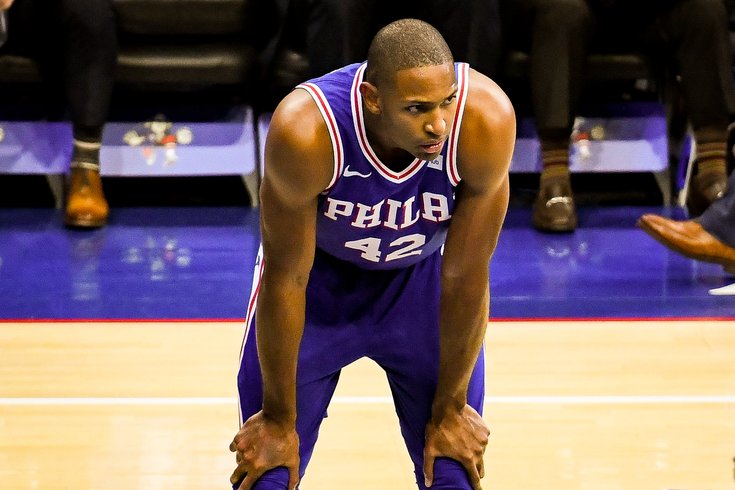 Basketball feels like faraway fantasy world at this point, but that hasn't stopped you from submitting questions for another Sixers mailbag, this time supplemented by questions about everything from pizza choices to Final Fantasy VII impressions.

In these trying times, I am here to offer musings on whatever subjects you're still interested in reading about, so if you want to ask me about anything, from Al Horford trade proposals to hip-hop music, please feel free to reach out through Twitter, email, or even the comment section down below.

What is a reasonable trade option for Al Horford

Assuming the Sixers entertain offers for Al Horford in the offseason, whenever that finally comes, I think it will be a very straightforward process that will go down as follows.

So what is the likelihood they strike the best possible deal? Low, if we're using history as a guide. Philadelphia's biggest "win" on the trade value front was when they acquired Jimmy Butler, who at that point had burned every bridge possible in Minnesota and was there to be had for a package that was basically impossible to turn down, even knowing how things turned out. But in this case, they're the team with the player who is viewed as a distressed asset, and since teams have seen how poorly Horford works with Joel Embiid and Ben Simmons the Sixers would be dealing from a major position of weakness.

Really, you would just be looking for someone with a bloated contract who fits with this group better than Horford does. Last summer that guy might have been Chris Paul, who has two more years of absolutely absurd salary coming his way and is certainly not getting any younger, but Paul was so good in Oklahoma City this season that I could see the Thunder trying to avoid a teardown and rolling with what they have in a market that isn't drawing free agents.

That doesn't really leave you with a lot of options. Go through the list of the league's biggest contracts and most of the players getting paid handsomely are not getting moved in a Horford swap. From there, it's a matter of motivation for both sides. Does a team like Chicago want to try a different version of the multi-big experiment Philly tried with Horford, and would the Sixers trade a guy they viewed as a potential playoff defender against Giannis Antetokounmpo for an expensive role player like Otto Porter?

Those are the kind of exchanges I think you're looking at here. They're not going to inspire much fanfare, but who knows, it might just be the sort of trade that would help everyone else settle into place.

on a scale from 1-10, how much is getting dressed in non-sweats/shorts when working from home bullshit

Everyone is adjusting to working from home (or not working at all, for that matter) differently, so if you need to maintain elements of your office routine to get going, I am not going to be the guy who judges or shames you. I am used to working from home and a lack of routine as a general rule to do this job because you never know when the news is going to drop.

For example, on the day the Sixers traded for Jimmy Butler, I had laid down for a nap after being up late writing about the first half of a back-to-back the night before, only for a loud alert to keep me awake and put me into work mode straight through Philly's game in Memphis that evening. I have had happy hours with family interrupted by news developments, and you get used to improvising to get stories done quickly and accurately.

But from a personal perspective, I can't imagine putting on real clothes to sit in my apartment and work. Wearing whatever you want is half of the draw of working from home. I'm a pair of slippers and a cigar away from dressing like a broke-ass Hugh Hefner a lot of the time, and I have the good fortune of working a job where day-to-day access doesn't warrant wearing formal attire anyway. If you can build steps into your routine like taking a morning shower, having a cup of coffee, or whatever it takes to get the gears in your head turning, I think you can absolutely be productive and successful without putting on a dress shirt to work from your living room.

I suppose I am an outlier in that I don't drink coffee outside of crunch-time situations, either, so I'm probably not the best person to ask here. Everyone has their form of self-discipline.

In light of the Donovan Mitchell report today... Where would he fit in with the Sixers if Embiid/Simmons are not part of any trade for him?

Truthfully, Mitchell would be awesome on this Sixers team. He's the pick-and-roll guard they need to juice up the attack, a guy who can get his own shot and create for Embiid, and his fearlessness as a shooter/scorer would be a welcome addition to a team where that quality is in short supply at times. Add on that he could take a lesser role here and focus more energy on defense, and you have the makings of a great partnership with that three-man group.

There are certainly downsides to this hypothetical, though. Isn't there probably still beef between Simmons and Mitchell, the silliness of the sneaker wars aside? Simmons fired some pointed shots at him over the years, and maybe that's water under the bridge, but these guys have big egos and would have to figure out how to distribute touches to make it work.

Beyond that, I don't know that ball-dominant, big-name players are the answer to their problems anyway. The Sixers need Simmons and Embiid to step forward as title-winning stars and seize the team themselves. You don't want them trying to walk a fine line to keep everyone happy, you want them to be unselfishly selfish and leading by example. That happens with the right role players around them, and I don't think any of those three are at a stage in their careers where they are prepared to settle for that fate.

Would a straight up trade of Joel Embiid for Karl-Anthony Towns make both teams better?

Disclaimer — this question came before Towns' mother tragically passed away, and I want to take a moment before we address the hypothetical to send my best to Towns and his family during what I imagine is an unbelievably trying time.

On the basketball side, I think Embiid makes the Timberwolves better because I think he is a better two-way basketball player than Towns. I am less sure about the other side of the equation and think there is a decent chance Towns makes Philly worse because the defensive drop-off from Embiid to Towns is massive.

While his skillset on offense feels ideal next to a guy like Ben Simmons, he's just not a player I believe in as one of the alpha dogs on a good team. Embiid isn't some giant crunch-time hero or anything, but I don't have any reservations about him in gut-check settings. I know he wants the ball and the opportunity to take the game if it's there, and I know if he's not able to get it that he is going to fight his ass off on defense to try to get it over the line. Maybe that's within Towns and would show up in a better situation, but I can only judge what the two have actually offered during their time in the league.

What are your first impressions of Final Fantasy 7 Remake?

Glad you asked, Chris! I wrote about this for Monday morning. Recommend the game to anyone who is interested in it.

Has Covid-19 saved anyone on the sixers jobs? Cost anyone their job?

I don't think it would be fair to say either with certainty, but I do think the COVID-19 crisis has different consequences for different people within the organization.

Brett Brown, for example, pretty much only stands to lose if the season is canceled and the Sixers don't get a chance to see this team in the playoffs. After they lost in heartbreaking fashion last season and the players all stumped for him during exit interviews, it was an easier sell to bring back a coach who was already relatively divisive amongst fans. There would be no such out if it all ends with no payoff, and though it seems unlikely he would survive this nightmare season, a deep, competitive run to the Conference Finals (or even perhaps the Finals) would be the only thing that might change the conversation.

The front office and players are a different matter entirely. Would the Sixers abandon ship on Al Horford without seeing this group play in the playoffs? Would they be willing to clean house in the front office knowing they built this group for a part of the season that wasn't played? I'm not sure at this stage.

Let's say this — major changes should be on the table regardless of whether they get to finish this season or not. The clock is ticking to build a contender around Joel Embiid and Ben Simmons, and this year looks like a waste from where we sit today.

Removing the general need to watch basketball for your sanity, would you prefer the season to be cancelled and Horford/Brown moved without delay, or the playoffs to start Nd the Sixers to ge swept in the ECF and possibly running it back?

I don't root for trades or firings in this gig, and I don't think a Conference Finals sweep would be enough to change the fates of the powers that be this offseason. A loss in a tightly-contested seven? That's a different story, but that's not in this hypothetical.

Personally, I think fans should be rooting for Simmons and Embiid to get deep playoff reps as early and as often as they possibly can, all other attachments aside. There is no way to know how they will react on a huge stage until that moment arrives, and there is no way to prepare for those games and moments without actually getting there. The coach and the front office and the supplementary pieces matter, but it is their growth that will power everything.

And yes, selfishly I would like basketball to cover, unless enough of you are interested in my musings about video games and binge-watching to get us through the rest of the year.

With specialty pizza being more prevalent than ever, white pizza has a higher ceiling. But tomato pie has a much higher floor, and I am generally looking for reliability in pizza, not upside.

Hi, @KyleNeubeck. First time, long time. Wondering if you might rank your favorite in-arena songs that you hear at Sixers games. Top 5 would do it. I’ll hang up and listen... https://t.co/NJf1qoqH9B

From what I can recall off of the top of my head (these are not in ranked order):

Honorable mentions go to Grindin' by Clipse, Ante Up by M.O.P., and You Know My Steez by Gangstarr, though there are other rap classics I love that are also played relatively frequently.

As luck would turn out, I have a feature related to this subject coming tomorrow, so I suggest you watch this space for that.