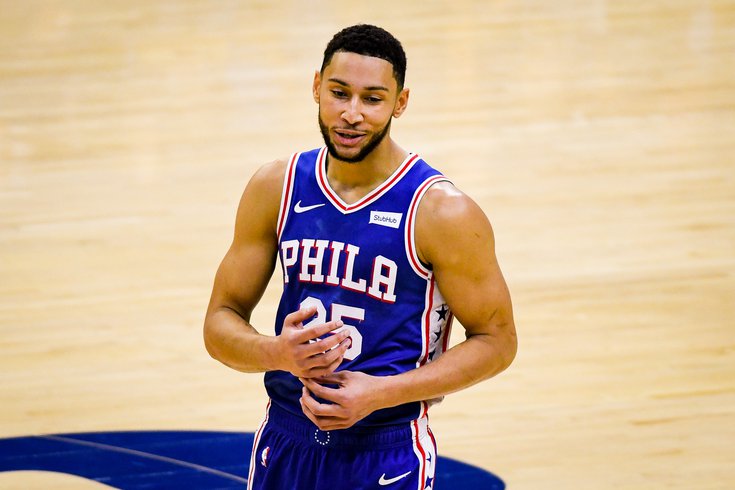 Regional finals begin today for our all-time Sixers one-on-one tournament, and our first matchup pits Ben Simmons vs. Wilt Chamberlain in a battle between a legend and an upstart.

As a reminder, here's what the Wilt Chamberlain region looks like after being updated to reflect results through the sweet 16: 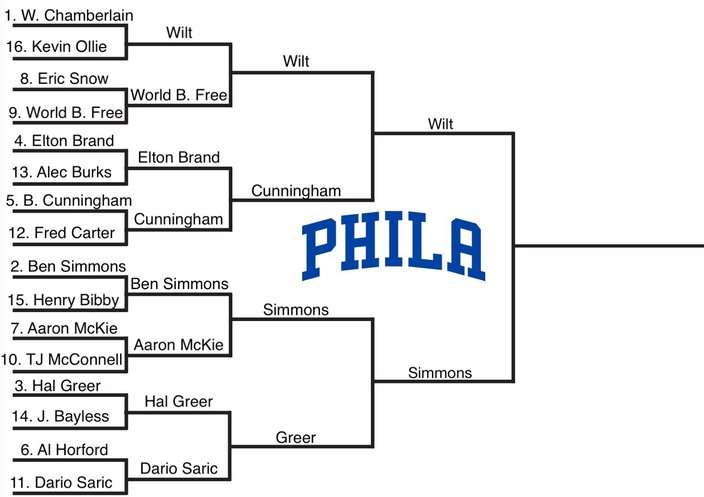 The results from the Sweet 16 of the Wilt Region were not particularly close:

Sixers legend Hal Greer put up a valiant fight against the younger star, but unlike in actual elections, the youth vote was just too much to overcome here. The people have gone chalk, and we get a fantasy matchup of the most dominant player in franchise history with one of the team's current stars.

Chamberlain's resume is, to put it lightly, absolutely astounding. By his 26th birthday, the same age as Joel Embiid right now, Chamberlain had won an MVP award, appeared on the All-Star and All-NBA 1st team three separate times, and averaged an absolutely comical 42.3 points, 26.6 rebounds, and 2.2 assists per game. He would go on to win titles in Philadelphia and in Los Angeles, eventually sacrificing some of the gaudy scoring numbers to play a more team-friendly brand of basketball.

Simmons, to put it lightly, is far behind even young Chamberlain on the career-achievement leaderboard, and unlike in some other matchups he has been involved in up to this point, the physical advantages he has been able to rely on are long gone.

However, most people buy into the tall tales of Chamberlain's athleticism without ever stopping to check if they are true, so let's do a little myth-busting. Many of the outsized statistical claims of Chamberlain's track-and-field exploits originate, in dubious fashion, from a Sporting News article in 1955 that was actually written by Kansas University's Sports Information Director during Chamberlain's freshman year at KU. Talk about an unreliable narrator.

All of these claims made by Pierce refer to his time at Overbrook High School. If you don't believe me, you can check the backlink and the date.

Think about how ridiculous that is! All of these myths are easily torn down using accessible records, but if you read a Chamberlain biography, odds are you're going to see one of those claims sneak in there anyway.

None of this is to say that Chamberlain was less than an exceptional athlete or basketball player. Watching him tear down the floor in transition, reach up through the sky to catch blocked shots, and even get his hands on skyhooks from a young Kareem Abdul-Jabbar, there is no question his athletic ability would have been suitable for any era in NBA history. But the further we get from his life and career, the more absurd the exaggerations are, particularly because the verifiable information should speak for itself. I think Simmons would be at a disadvantage in several areas, as I believe the claims regarding Chamberlain's strength, but I am reasonably confident Simmons would win the speed battle.

The question is whether or not that matters. If Chamberlain wanted to, he could basically just camp out in the lane and dare Simmons to shoot jumpers, because there's no question he could (and would) win a lot of the battles at the rim if Simmons tried to take it at him. Chamberlain's offensive game was also a lot more refined than just dunks and layups, so the dribble limit doesn't hurt him much. I can picture him using his length to make a fair number of shots off of the backboard and over Simmons' outstretched arms.

I suspect the people will rally behind a Philadelphia legend here, and I too would vote for him. But the moral of today's story is that the passage of time distorts history, and we should all remember to do our own research and come to our own conclusions based on legitimate evidence, not some tall tale from somebody with an agenda. Thank you for attending today's TED talk.