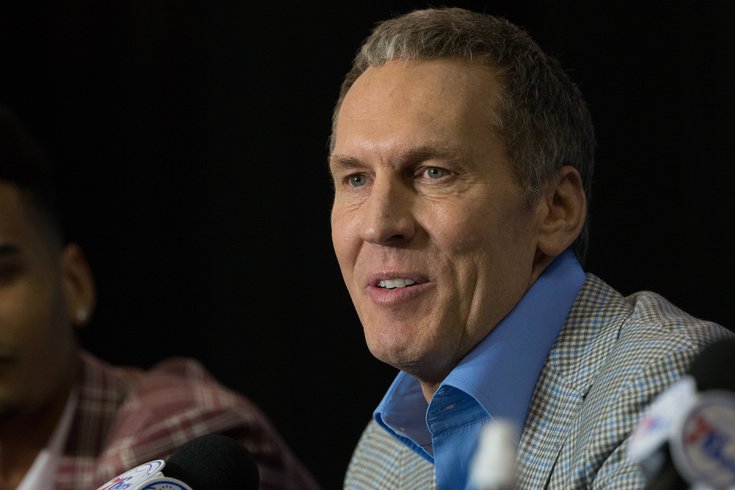 Bryan Colangelo peers over his totally normal collar during a press conference in Philly.

Former Sixers GM Bryan Colangelo has interviewed for the lead basketball operations job with the Chicago Bulls, according to a new report from Shams Charania of The Athletic. Colangelo joins a group of executives including Denver Nuggets GM Arturas Karnisovas and Jazz GM Justin Zanik.

To say this is a bit out of the blue is quite an understatement. Last we saw Colangelo, he was in the process of exiting the Sixers in a moment of disgrace, a burner account scandal forcing him to part ways with the organization right before one of the most pivotal offseasons in franchise history. Colangelo's exit forced the team to operate without a GM and eventually promote an inexperienced executive into their lead basketball operations position in an effort to leave the rest of his front office in place.

While Colangelo remained mostly silent on his way out of town, save for blaming his wife in a statement released by the team in June 2018, his family tried to circle the wagons around him. In interviews conducted later that summer, father Jerry Colangelo insisted Bryan's actions were above reproach.

"It’s been a tough year for Bryan under the circumstances," the elder Colangelo said on SiriusXM in August 2018, "to lose a job over something, or nothing that he did. That is unfortunate."

Thoughts of his father aside, tt's hard to overstate the seriousness of that scandal even if it gets boiled down to, "a burner account scandal." Within the tweets of someone close to Colangelo, these accounts disparaged Philadelphia's franchise player, leaked private medical information about various players who had been with the team, and undermined the team's public support of developing players with the franchise.

Even though it seems clear in hindsight that Colangelo was probably not the man behind the accounts, there was a great deal of sensitive information just floating around the internet as a result of their existence, which falls on him. That he was able to get another interview for a job of this stature is a testament to something — whether it's nepotism, a lack of creativity, or a favor for a powerful friend is up for someone else to determine.

One bit of Philadelphia-centric intrigue is Colangelo's ability to get consideration for this sort of job before former GM Sam Hinkie, who set Colangelo and Co. up with the assets (and franchise player) they have since lit on fire. Hinkie's aversion to playing the political side of the GM job, e.g. building relationships with agents, executives, and even media members, has been cited as one of the primary reasons (beyond the distaste for the drastic tanking) he won't be taken seriously as a lead exec candidate. But it's hard to square the "relationships" and trust critique mattering for him so much, and not for a guy who burned through any semblance of trust the public could have in him.

That aforementioned franchise player, Joel Embiid, has gone out of his way to fire strays at Colangelo since his departure, citing an improved relationship with GM Elton Brand as a feature of the new front office.

And in discussing Markelle Fultz's struggles in the fall of 2018, Embiid said publicly that "previous management" did not do right by Philadelphia's young guard.

"It's a tough situation," Embiid said. "Last year I said that I felt like a lot of people didn't have his back, and that was with the previous management. But I feel like everyone has been trying to do their job helping, and I don't even know what's the problem."

So setting aside the mixed track record from a player personnel perspective, misreads in trades and free agency, and a burner account fiasco, you also have the franchise player of the last team you ran publicly disparaging you long after you've left town.

There's a lot for the Bulls to consider.

A potential silver lining to all of this? If Colangelo somehow ends up being hired by the Bulls, the working relationship the Sixers will have with that front office should be pretty good. Perhaps we'll get to see what it would be like to have Colangelo and Brand on opposite sides of the negotiating table.