We are moving on to the sweet 16 of the all-time Sixers one-on-one tournament, and now the bracket is finally starting to force us into tough decisions. Could Ben Simmons beat Hal Greer one-on-one, and could Billy Cunningham deal with former teammate Wilt Chamberlain? These are the sort of answers we are after in today's polling.

As a reminder, here's what the Wilt Chamberlain region looks like after being updated to reflect second-round results: 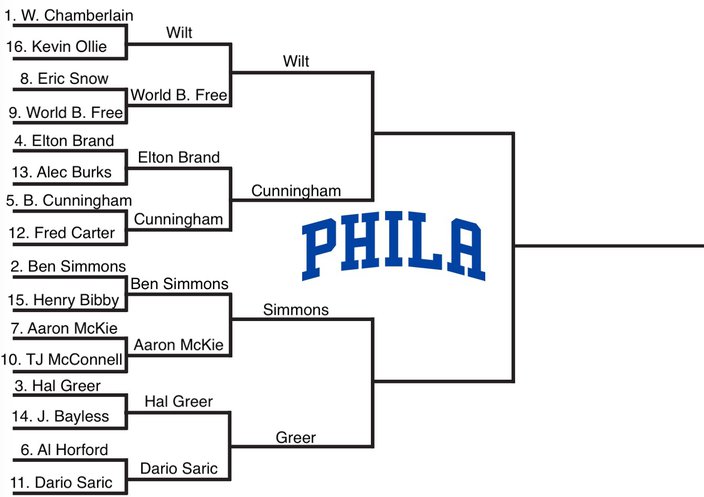 (If you want a direct link to the photo with a better/closer view of the original bracket, you can check out the bracket here. Our full list of first-round results is available here.)

The results of Round 2 in the Wilt Region were not all that close.

No real surprises here, and the mild five vs. four "upset" doesn't really qualify as one here. Let's move to the first matchups of the Sweet 16.

A lot of the older heads have taken issue with my seeding of Cunningham, who is admittedly one of the most important figures in Sixers history. A title winner as a player and a coach for the team, Cunningham accomplished everything there is to accomplish with the franchise, and yes, he was probably a bit under-seeded. But in my defense, he hasn't exactly suffered because of it yet.

This is the end of the line for the Kangaroo Kid. Cunningham was an intergral part of that 1966-67 Sixers team many consider among the best ever, but the man who he's up against here was the true driver of their success. If you need any additional evidence of that beyond the box score, look at Philadelphia's trajectory following Chamberlain's departure in 1968. They would stay competitive in 1968-69 behind great seasons from Cunningham and Hal Greer, but were unable to account for Wilt's absence as the roster changed around them, falling 30 wins off of the pace of Chamberlain's final Sixers season within three years.

That is a testament to Chamberlain's presence on both ends. Though the footage isn't plentiful, Chamberlain's athleticism was otherworldly, allowing him to block shots most men could not reach and finish from all sorts of angles on the other end. While a common criticism of Chamberlain from modern fans centers around the competition he faced, he didn't score 30,000+ points by just dunking on a bunch of mailmen. He could hit turnaround jumpers off of the glass, touch shots and floaters in traffic, and yes, he could certainly power through people with the best of them. With his length, a hook shot was damn near impossible to block.

It is not a diss of Cunningham to say he is not up to the standard set by one of the greatest to ever live, and to be clear, Cunningham is probably better than a lot of people remember. When he defected to the ABA in the early 1970s, Cunningham immediately won the league's MVP award, and if not for a career-ending injury in the mid-70s perhaps he would have had a few more years of productive basketball in him.

Still, this is Chamberlain's matchup to lose. The man shot over 50 percent from the field in a season where he attempted almost 40 shots per game. He was superhuman.

I have stumped reasonably hard for Ben Simmons during this bracket so far, mostly because I think his limitations are less concerning in this format and because he is one of the best defensive players you could hope for in this setting. Between his size, recovery speed, and hands, he can proactively win a lot of battles and recover from risky gambles or misreads if/when they happen.

So how do you handicap this one? This is where I have to let my inner millennial kick in and point out how different the game is now compared to when Greer was running the show for Philadelphia. Simmons would absolutely tower over him, a full eight inches taller with about 55 pounds of muscle separating the two men. That would make it very difficult for Greer to shoot over Simmons, forcing him to beat him off of the dribble in a game where you only have so many dribbles to work with, and against one of the current game's best athletes. Not exactly a good matchup for him in that respect.

Of course, Greer's ability to get buckets should not be diminished. He's the all-time leading scorer in franchise history, and while he may only have been six-foot-two, that didn't prevent Greer from getting buckets in his day. He had an impressive ability to probe just enough to find gaps in defenses, whether it required pump fakes, speed, or a well-timed cut, and he could get shots off in a hurry once that window opened up. You don't get selected to 10 straight All-Star games and seven consecutive All-NBA teams on accident, and something many people have forgotten is that it was Greer, not Chamberlain, who led the 1967 Sixers in playoff scoring during their title run while continuing to play a pivotal role as a setup man.

When the question, "How would Ben Simmons score?" comes up in this tournament, I think you need to remember a big reason Simmons struggles to score in the halfcourt is that teams just load up the paint and dare him to either barrel through multiple players or kick to an open teammate they'd rather have shoot. With no rim protection lurking behind Greer, you're basically just asking Simmons to use his first step to seal off Greer and score over a player who offers no physical threat to his finishing ability. Simmons' touch would probably let him down a frustrating number of times, but this is not going to turn into a jump-shooting competition.

In an ideal world, no one should be upset at either player losing here, because both bring strengths to the table that will make life difficult on their opponent. More importantly, Simmons would be lucky to have half the career Greer did in a Sixers uniform, and he should look back at Greer's ability to coexist with a legendary big and see what he can apply to his current partnership with Joel Embiid.