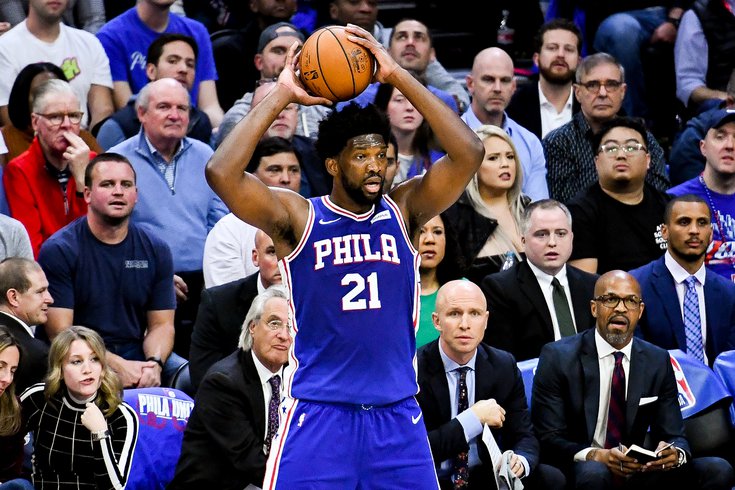 The second of our regional finals of the all-time Sixers one-on-one tournament is here, and it pits Charles Barkley vs. Joel Embiid, two terrific talents for whom physical fitness has been a challenge at points in their careers.

As a reminder, here's what the Charles Barkley region looks like after being updated to reflect results through the Sweet 16. 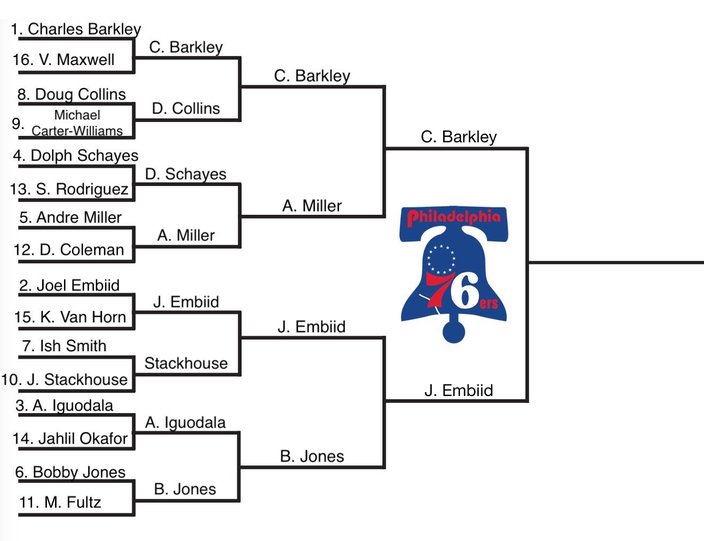 Here's how the polling split in the previous round:

There was a relatively strong Bobby Jones contingent, who rightfully pointed out that his defensive chops would have given him a good chance to upset Embiid, but once again the youth vote prevails.

Let's discuss today's matchup, shall we?

A battle between the two players in Sixers history for whom physical conditioning mattered most. Maybe you could throw Derrick Coleman in there too, but I don't think he was ever good enough in a Sixers uniform to justify the same level of scrutiny.

Incredible as Barkley was as a player, I struggle to see how he is going to score enough to win this matchup. Embiid would absolutely tower over him, making any jumper Barkley would have to settle for much more difficult than it needs to be. The younger man could even feel comfortable sagging off of Barkley a bit to entice him into those shots — by the numbers, Barkley is the worst high-volume shooter from three in the history of the NBA, and dropping back closer to the rim could give Embiid an easier assignment without having to do much work.

That being said, I am probably underrating Barkley in this matchup a little bit. While we are not considering the non-Philly parts of his career in this exercise, his failure to win a ring should not overshadow that he had some absolutely monstrous performances in big-time situations. The 1993 Finals are remembered for Michael Jordan's absolutely comical numbers, overshadowing Barkley's own sensational line of 27.3 points, 13 rebounds, and 5.5 assists per game in a six-game defeat. Not being better than a player many consider to be the greatest of all-time* shouldn't erase how good Barkley was.

(*I am already ready for some of you old heads to yell at me and tell me why Wilt Chamberlain is the GOAT, but now is not the time or place.)

During the years in Philly where he was fortunate enough to make the playoffs, Barkley's numbers were roughly the same as they were during that 1993 Suns run to the Finals. There are a lot of what-ifs for Barkley's career in Philly, but the biggest one for me is simple — what if Andrew Toney maintains his health and isn't forced to retire early in the late 1980's? Toney would have given Barkley a dangerous running mate to help take attention away, opening the floor up for more isolation success.

And it should be noted that, for all of Embiid's gifts and advantages on Barkley, Sir Charles was an absolutely sensational finisher and scorer. In 1989-90, Barkley shot 60 percent from the field for the season on a shade under 15 attempts per game, living in the paint and at the line en route to a first-team All-NBA selection. In many ways it was superior to his 1993 MVP season, he just happened to be surrounded by a significantly worse group of players.

One of the intriguing parts of this matchup for me is that neither guy can take advantage of their rebounding gifts. Embiid's size would have allowed him to pluck some misses out of mid-air at Barkley's expense in a different format, and Barkley's prodigious rebounding talent and strength would have made him a force to be reckoned with, even with the size discrepancy.

As the old saying goes, you can't teach tall, and Barkley didn't deal with a lot of big man of Embiid's ilk back in the day, so I am going with the current star over the former. Make your choice below: