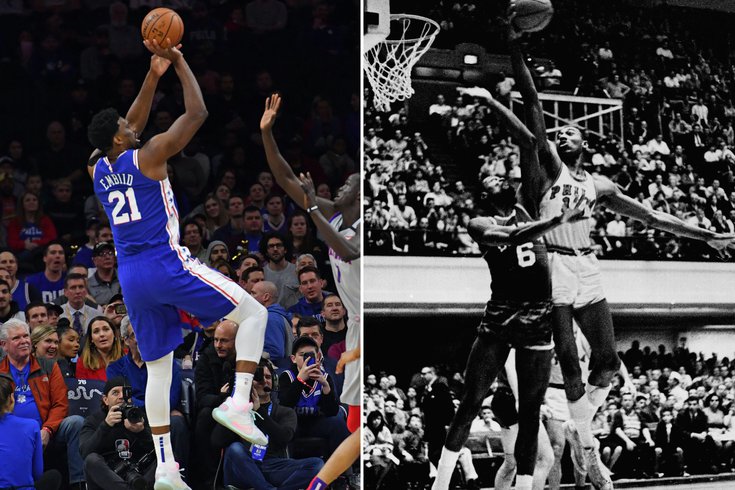 After a brief hiatus to focus on the NFL Draft, we are back with one of the final installments of the all-time Sixers one-on-one tournament, pitting Wilt Chamberlain vs. Joel Embiid in a matchup for the ages.

Our Final Four is now set, and the public is clearly not a fan of upsets in this tournament. Embiid was the only player who didn't have a region named after them to advance to this stage of the tournament, with the other three No. 1 seeds advancing.

(If you want a direct link to the photo with a better/closer view of the original bracket, you can check out the bracket here. And you can see how each region played out by checking out our region final posts: Wilt | Barkley | Dr. J | Iverson)

A refresher for anyone new to this — these weren't the "best" 64 players, necessarily, but 64 players from an assortment of eras and categories that I initially was going to divide by playstyles (playmakers, scorers, finishers, and potpourri), before realizing you could put four or five of the greatest players in franchise history into the "scorer" category. I tried to account for some combination of impact, longevity, peak value, etc., with the first goal to split up the players I would consider to be the Sixers' version of Mt. Rushmore — Wilt Chamberlain, Julius Erving, Allen Iverson, and Charles Barkley. Critically, the players were not strictly seeded based on how good they would be in a one-on-one setting.

The Elite Eight Matchups in the Wilt and Barkley regions shook out as follows:

Barkley went down in a close battle vs. the current franchise player. Barkley was an incredible, perhaps even underrated player, but this feels like the right result to me. Without the ability to pound the offensive glass and with more defensive problems to sort out, the elder Barkley would have trouble handling Embiid, who doesn't have many weaknesses in a one-on-one matchup. As for Chamberlain vs. Simmons, I made the case for Simmons at the time, though I ultimately agree that the guy who excelled at winning one-on-one battles would beat the guy who struggles with them.

Now, we have our battle of the titans. We're changing the format a bit for these final matchups, making cases for both players and weighing in with "expert" picks at the end. Let's get right to it.

Tale of the Tape

The case for Chamberlain

There is a reason Chamberlain's name still gets thrown into discussions about the greatest players of all-time in spite of playing in the era he did. His resume is downright comical, and though his individual numbers suggest he perhaps should have been able to win more than he did, his production across the board is unmatched in NBA history.

One of the interesting things that has happened over time is Chamberlain's career being taken down a peg when comparing him to the other great big man of his era, Celtics legend Bill Russell. As the story goes, Russell did everything it took to win, from sacrificing his individual numbers to guiding blocked shots to teammates, while Chamberlain was the stat-padder in pursuit of his own glory. Sprinkle in the success of Russell's Celtics in general but especially vs. Chamberlain, and suddenly people have talked themselves into believing Russell was the better player.

Let's dispel one myth — the idea that Russell personally shut Chamberlain down. The head-to-head numbers are publicly accessible, and while the Celtics certainly got the better of Chamberlain's teams, the gap between the two players in those games was absurd.

Are those numbers below his typical averages? Of course! But that's what tends to happen to every player against elite competition. There is still no comparing their production.

And though Russell often gets credited for "slowing" Chamberlain, no one really ever talks about the fact that Russell had the bigger drop in efficiency between the two players. The size gap between the two players also allowed Chamberlain to be even more dominant on the glass than he already was, and they were not even in the same universe offensively. Russell had the benefit of being on the better team with better management, and that's about it. Anything else is propaganda*.

*That includes the assertion about Russell's blocked shots being of a superior variety. There are countless highlights of Chamberlain snatching shots out of the air and initiating fast breaks. I can't tell you if Russell did it more often, but the assertion Chamberlain was only in it to make highlight plays is ridiculous on its face.

So Chamberlain obviously has no fear of matchups with elite big men. What about this one? For starters, he's the better bet not to suffer an in-game injury, and while he might not be stepping out to shoot long jumpers, he's the type of burly/athletic big man who has given Embiid fits over the years. The younger man would not be able to just stick his ass into Chamberlain and throw him backward, and would have to rely on a jumper that can come and go from time-to-time.

Another Chamberlain misconception, which stems from how people view the era, is that he just simply played above-the-rim against a bunch of stiffs and that explains his crazy production. That's very obviously not the case — there are montages of Chamberlain just hitting fadeaway jumpers over his opponents, with his touch and ability to use the glass major weapons. He did not stand out from the pack in efficiency simply because he was a big dude.

Does the dribble limit hurt him? Certainly, and Embiid is not going to play in fear on defense. But there were a lot of tricks in Chamberlain's bag, and he had no trouble scoring against double and triple teams, let alone single coverage.

The case for Embiid

For all of Chamberlain's accomplishments and strengths, he never really had to deal with a player cut from Embiid's cloth. Men that size did not shoot like Embiid does back in Chamberlain's day, and that took some defensive burden off of the legs of every center. Protect the paint, and your job was mostly done.

Embiid may not be able to move Chamberlain off of his spot, but he wouldn't really have to. As a face-up player in a one-on-one game, most of the concerns you have about Embiid initiating for himself disappear. There's no help defense to poke at his drives or surprise him from behind, and his ability to create space with a jab step or shoot over a hesitant defender is a major asset here. The downside? You're not shooting free-throws in this setting, so his foul-baiting prowess is of no use.

Defensively, Chamberlain did not really go up against players like Embiid either. His greatest rival was charitably listed a few inches shorter than him and giving up 60 pounds. Embiid's functional post strength has been an issue on offense, but defensively he is one of the league's greatest talents, a man who propped up inferior teammates from the moment he entered the league. Chamberlain is not going to blow by him, he's not going to bully him, forcing him to win a battle of skill with Embiid.

How prepared is Chamberlain to initiate his own offense from the three-point line, which didn't exist when he played basketball? He spent his career setting up shop and getting the ball from his guards and forwards, rightfully so, but that gives us no evidence of what he would have looked like checking the ball up from beyond the arc. The dribble limit forces Chamberlain to get to work and get to work quickly, and that's a tough ask when you're doing something you never had to do during your playing days.

As displayed above, it's not impossible for Chamberlain to win a game of skill, but the overall dedication to training and skill refinement is light years ahead of where it was when Chamberlain played. Getting off those fadeaway jumpers is easier when you have a considerable size advantage and can create separation to get that shot up. Embiid is used to that sort of thing, while Chamberlain might have an adjustment period given the competition he faced.

The wild card is Embiid getting going from three, something that doesn't happen in games consistently but is a bigger threat in a low-pressure environment like a one-on-one game. Chamberlain might scoff at the very idea of a big man taking threes, and maybe he concedes a couple of open looks to let Embiid get out to an early lead before knuckling down. The margins matter in matchups of guys with considerable talent, and I wonder if the change in style for Chamberlain throws him off enough to start to tilt the matchup.

As much as I would like to lean toward the player I cover and the younger generation's guy, I think I have to go with Chamberlain here. His outlier strength and athleticism allow his defense to hold up in this situation, and many of Embiid's tricks of the trade on offense would be tougher to utilize against the Sixers legend.

Weigh in below with your pick for this Final Four matchup, and we'll have another doozy for you on Thursday afternoon.