A reporter's guide to avoiding fake sports rumors on Twitter 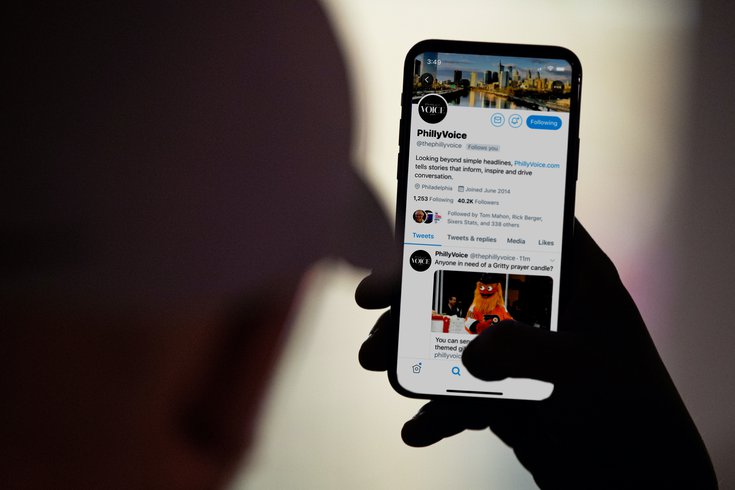 There's a lot of information on Twitter. Not all of it is true.

Anyone who has spent a lot of time online has had it happen to them. You're going about your day casually scrolling through Twitter when suddenly a tweet pops into the timeline that makes you do a double-take. It could be a fake trade rumor, a death hoax, or a much more harmless piece of information, and you're not quite sure whether to panic or celebrate. Sometimes it even comes from a name that you recognize and a source you thought you could trust.

It is easier than it has ever been for an everyday person to dupe strangers online. A generation of adults who told you not to believe everything you read online has had the logical part of their brains turned to oatmeal by Facebook, and the younger generation is not much better at wading through the nonsense on Twitter.

On the morning of Thursday's NFL Draft, a person who will go unnamed sent me a fake death rumor for a prominent football personality, only for the Twitter account in question to get deleted within minutes of that happening. It was, shall we say, a tough look, and jokes aside ends up being a major problem in news consumption.

You will probably come across some people who are trying to seem important or simply trying to screw with you on days of big events, and as someone who has to gather and filter information, here is a quick guide on how to avoid being the idiot who gets fooled.

Do: Identify reporters you trust in a given field

In sports, this is easy enough to manage because there are prominent reporters in each sport who pretty much only focus on breaking news. Often that means you'll see info being spun that comes from teams and the league itself in order to maintain important relationships, but the trade-off is that they're able to get pressing info/breaking news direct from the source.

If you are deep into a certain sports culture, you'll likely know who these people are. In the NFL, Adam Schefter is the guy at the front of most big NFL news. In the NBA, Adrian Wojnarowski and Shams Charania are on top of the majority of national stories coming in. In football especially, there are a number of guys who are right below that level, though I'll spare you my personal ranking of their worth and leave that up to you.

Having a grasp of local sources for teams around the country is a bit tougher, but you can apply the same principles here as you do nationally. For Philadelphians, I would go to bat for Jimmy Kempski and myself as people you can trust on the Eagles and Sixers respectively, as I can vouch for the care that is put into the work. If you follow people who tend to have high standards for their day-to-day work, odds are they're not going to lead you astray.

Here's my first big rule of thumb — do not trust anyone who is not willing to put their actual name on something. Twitter, Reddit, etc. have given rise to a class of people often referred to as "in the knows" (or ITKs for short) in soccer circles who anonymously make big claims about team plans, and sometimes they come up with information that turns out to be useful. Any reporter who believes they are the only sort of person who gets leaked information is not very smart and probably not good at their job.

But the standards for sharing tend to be lower, and with no professional reputation to live up to, they'll happily delete old tweets and posts after they're proven wrong because they have no one they need to answer to. The people who are paid to do this for a living have consequences when they get things wrong (myself included), ranging from something as simple as a momentary embarrassment to losing their job.

Do: Build out lists and mobile alerts to get info directly from trusted reporters

There are a couple of ways to do this, so I'll give you both depending on your consumption habits.

Mobile: This will probably be the majority of you who just want to scroll through social media on your phone as an event is ongoing. Twitter makes it very easy to get the most important information sent directly to you so you don't even necessarily have to sift through your timeline to get important info.

For this exercise, let's use my pal Jimmy as our example. If you go to his page, under the banner image and next to the "Following" button you will see a circular icon with a bell and a plus sign next to it. Clicking on that will bring up a list of options to choose from (my apologies to Jimmy for not having every tweet of his beamed directly to my notifications box):

Provided you have given Twitter permission to send you notifications on your phone, the "All Tweets" option will give you a mobile notification every single time they send a tweet, including retweets and even replies to other people you follow. You don't even need to have Twitter open on your phone. It cuts down the guesswork on days you know will be heavy breaking news days, and if you don't want a reporter's thoughts in your notifications all of the time, you can easily turn this off as soon as you find them to be unnecessary.

Desktop: This is a pretty big chunk of my Twitter consumption, as it lives in the background while I work on my laptop for long stretches of the day. Here, we're going to make use of the Lists feature, as it will allow you to achieve the same goal as the mobile option without Adam Schefter haunting you all hours of the day.

If you're using Twitter on desktop, there is a bar on the left side with each of Twitter's various pages. You want the "Lists" page, and up near the top of the screen you'll see an option to begin a new one, which will bring up a prompt for a name and description. An example for the sake of this article: 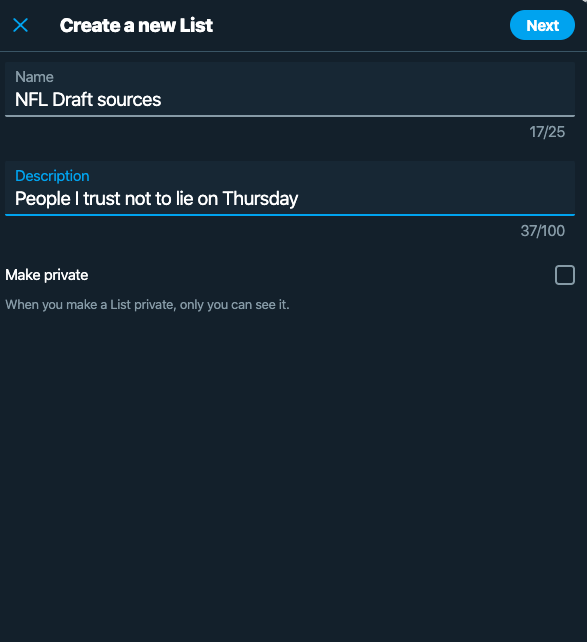 Once you're through with that, it will bring up a list of names of people you follow along with a search function, which will allow you to use Twitter's search function to find anyone you might want to throw on the list. Throw anybody you believe to be a news breaker on here, and then once you're done, it'll give you a screen that looks like your normal timeline, just filtered out to exclude anyone except for your trusted names. 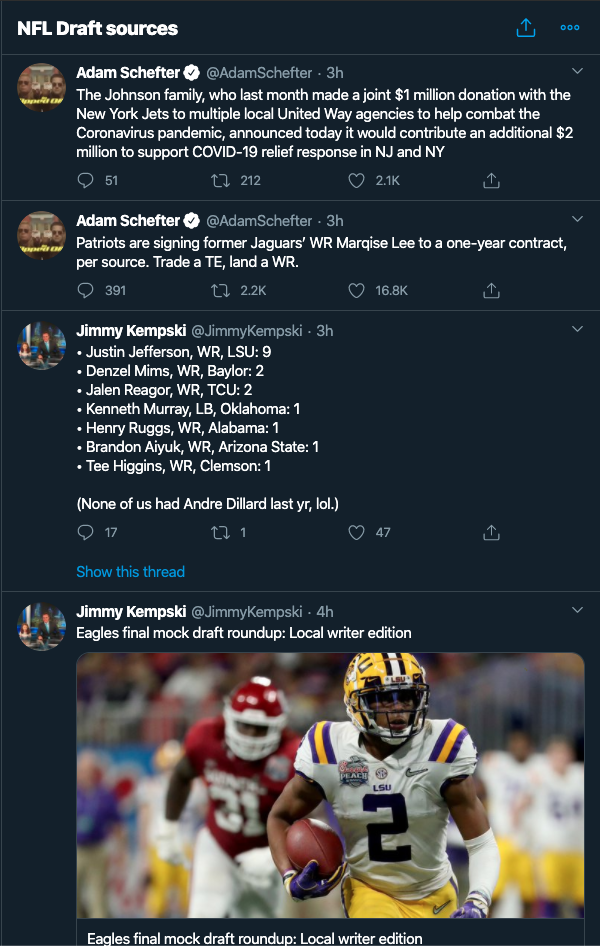 How you use it is up to you. I use Tweetdeck on my laptop, which allows me to stack different lists next to each to my main timeline and cross-reference to see if someone is tweeting or retweeting bullshit (which is a good way to get the ol' unfollow, for the record). The beauty of Twitter's list function is that you can use it and edit them in the mobile app, too.

This will help you avoid our next pitfall...

This sounds obvious but I have to reiterate how many people fall for this nonsense every day, every week, every month, every year. All it takes is one person with a decent-sized following to re-share the wrong tweet and it's off to the races.

There are two primary classes of dupes to look out for:

No. 2 on this list is the one that causes the most disruption on a day like the NFL Draft, and it's why things like lists and mobile alerts are so crucial. Cross-referencing lists, you can check details such as when the accounts are created, whether someone is verified or not, and who does or does not follow the account. If an account pretending to be Adam Schefter only has 410 followers, please be smart enough to understand that is not real.

While we're on the subject...

Do: Use your damn brain

What this ultimately comes down to is your own ability to filter information. That is harder than ever in the internet age, but only if you don't take an extra second to think.

For example, if a trade sounds like absolute nonsense on paper, that's because it probably is unless Bill O'Brien and the Houston Texans are half of the deal. Elaborate, multi-player deals can often be dismissed off-hand, and fans know as well as anyone that player-for-player swaps tend to involve guys closer to the bottom of the roster than the top. Common sense is always your ally.

This isn't an article about blindly trusting news breakers, either. The weeks leading into a draft are notorious for being loaded with misinformation, and that is often intentional. Teams will use certain voices to blow smoke through the media in the hopes of manipulating boards. That phantom injury for a big-time prospect that wasn't talked about until the week before the draft? Maybe it's real, but it's just as likely coming from a team out of that player's range hoping to spook opponents into playing scared, and there's no way to discern the difference from the outside looking in.

One last thing — please be sure to make fun of your friends, family, and coworkers who contribute to this problem. Shame is a powerful motivator, and we can't let the rubes among us drag the rest of us down.