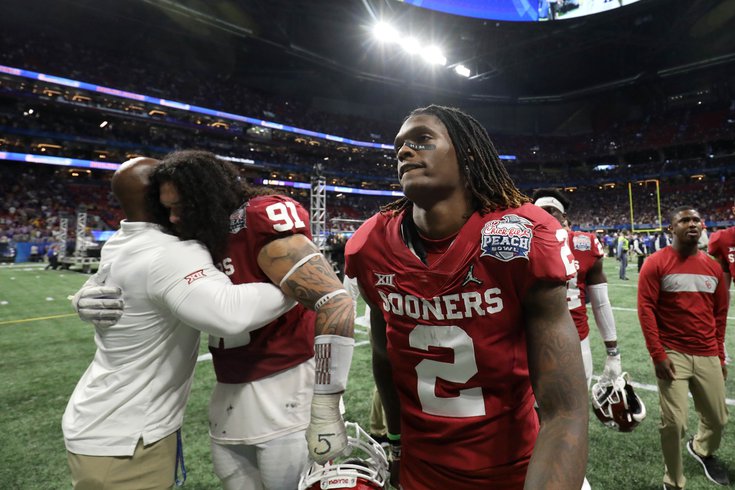 Over the last two or so months, we have published five "Eagles-only" seven-round mock drafts. For the first (and final) time, here is our one and only full first-round NFL mock draft:

2) Washington: Chase Young, DE, Ohio State. Last year, the Cardinals took Kyler Murray with the first overall pick after spending a first-rounder on Josh Rosen the year before. If the Washington team were picking No. 1 overall, I could see them being tempted by Burrow, but with Young being an elite pass rushing prospect and the next quarterbacks after Burrow probably not being substantially cleaner than Dwayne Haskins, Washington won't overthink it, and just take the star defender. A trade back feels unlikely too, with the next team up, the Lions, eager to deal.

3) Lions: Jeffrey Okudah, CB, Ohio State. The Lions would love to move out of the third spot and add some surplus picks. With a small move back to pick No. 5, they might be able to land Okudah anyway, but we'll play it straight here.

4) Giants: Tristan Wirfs, OT, Iowa. Like the Lions, the Giants would love to move out of their spot too, but they may have to stay. If so, they'll have to "settle" for one of the most athletic offensive lineman prospects ever. Wirfs has played both at LT and RT, so he can play at RT for the Giants as a rookie, and then move over to the left side in 2021, when the Giants will have their first opportunity to rid themselves of Nate Solder.

5) Dolphins: Justin Herbert, QB, Oregon. This has to be a quarterback, right? Like, they're not going to screw around and take a freaking offensive tackle instead of a quarterback, right? With Tua Tagovailoa's injury concerns, the Dolphins go the safer route and scoop up Herbert, a very good quarterback prospect in his own right. As a defensive coach and former Bill Belichick disciple, it's probably not a stretch to assume Brian Flores will want to build around a quarterback who doesn't turn the football over, and Herbert averaged fewer than six INTs per season in his four years as Oregon's starter.

6) Chargers: Tua Tagovailoa, QB, Alabama. The Chargers have a good roster, quarterback aside, and they can say all they want that they're satisfied with Tyrod Taylor as their starter, but, please. Tagovailoa's injury risk is a big one, but in the NFL you either have a quarterback, or you don't, and if you don't you have no chance. So just get the quarterback.

7) Panthers: Derrick Brown, DT, Auburn: Matt Rhule is likely to want to built from the trenches out, so OL or DL is possible here. Brown is probably the best value

8) Cardinals: Isaiah Simmons, LB/S, Clemson. I struggled with where Simmons would land. I don't have a great reason for his fit with Arizona, other than that I can't see him falling much further than this.

9) Jaguars: Javon Kinlaw, DT, South Carolina. Kinlaw has some medical concerns that could cause him to drop. Otherwise he's a top 10 pick all day. If he does fall, he may just wind up in Jacksonville at pick No. 20 instead.

10) Browns: Andrew Thomas, OT, Georgia. The Washington team really hopes that this is not the outcome here, as the Browns are one of their last hopes for getting something decent in return for Trent Williams. But clearly, the Browns need a LT.

11) Jets: Jedrick Wills, OT, Alabama. Many have the Jets taking a wide receiver. Joe Douglas addressed the Jets' major offensive line issues in free agency, and will continue to do so in the draft.

12) Raiders: CeeDee Lamb, WR, Oklahoma. This feels like one of the easiest picks in the draft to make, if Lamb survives the first 11 picks. The Raiders may be the only team in the NFL with worse receivers than the Eagles.

13) 49ers: Henry Ruggs, WR, Alabama. A wide receiver tandem of Deebo Samuel and Henry Ruggs to go along with the Niners' run game is a scary thought. If only their quarterback wasn't Jimmy Garoppolo.

14) Buccaneers: Mekhi Becton, OT, Louisville. In trying to put this jigsaw puzzle together, I had Becton as high as 3, and as low as 14. This spot is probably the floor of the top four offensive tackles. Becton is a 6'7, 367-pound mountain that the Bucs can just plug in at RT.

16) Falcons: C.J. Henderson, CB, Florida. There's a lot of smoke around the Falcons trading way up for an impact player. If they like Henderson, as many have guessed, I don't think they'd have to move at all for him.

17) Cowboys: K'Lavon Chaisson, DE, LSU. The Cowboys have struggled finding edge rusher production opposite DeMarcus Lawrence, and then they did for one year in Robert Quinn, who bolted in free agency.

18) Dolphins: Austin Jackson, OT, USC. It's just understood that the Dolphins are seeking offensive line help in this draft, and they're the first team to dip into the next tier of offensive tackles. Jackson may take a year or so to acclimate to the NFL, but he's super young and his upside is as high as the top four guys.

20) Jaguars: Jordan Love, QB, Utah State. The Jaguars can't really be hitching their wagon to Gardner Minshew as a starting NFL quarterback, can they? The idea that they're set with him is baffling to me.

21) Eagles: Justin Jefferson, WR, LSU. Here the Eagles get their guy, though it's looking like in most scenarios if they want one of the top four receivers they'll probably have to trade up.

23) Patriots: A.J. Epenesa, DE, Iowa. The Pats could trade up for a quarterback, but I don't think it'll be Jordan Love, who had 17 INTs in 2019. A move for Tua, should he slide, is more likely. In this scenario, they take the safe pass rusher.

24) Saints: Patrick Queen, LB, LSU. In a division with Christian McCaffrey, Todd Gurley, and now Rob Gronkowski, the Saints need a cover linebacker, and Queen is the best one in this draft.

25) Vikings: Jalen Reagor, WR, TCU. After landing a corner a few picks earlier, the Vikings turn their attention to a player who can replace Stefon Diggs, minus the drama.

26) Dolphins: Brandon Aiyuk, WR, Arizona State. After giving Herbert or Tua or whoever they take some OL help at 19, the Dolphins give him another explosive receiver to pair with DeVante Parker.

27) Seahawks: Marlon Davidson, DT, Auburn. It's pointless to even make a pick for the Seahawks here, seeing as the trade out of their original first round pick every year. Davidson would make sense if they do stick at 27, or make a small move back.

28) Ravens: Kenneth Murray, LB, Oklahoma. This is the more appropriate team fit for Murray, not the Eagles at 21, and he'd be a steal here for Baltimore.

29) Titans: Antoine Winfield Jr., S, Minnesota. Winfield is a personal fave, so I shoehorned him into the first round a bit here. I like his fit in the Tennessee defense.

30) Packers: Ross Blacklock, DT, TCU. Wide receiver is the overwhelming choice for Green Bay here, but the Packers have taken a defensive player with their first pick in each of the last eight drafts. I'm not projecting an offensive player for them until I see that trend broken, especially given the way the 49ers just ran it down their throats all day in the NFC Championship Game in embarrassing fashion.