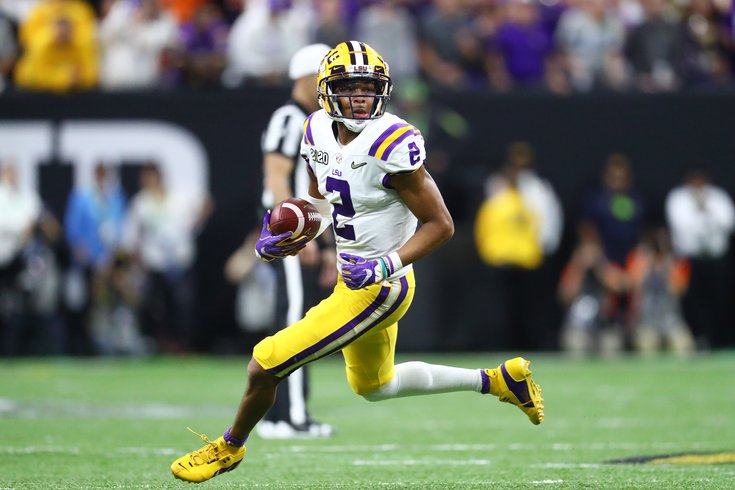 The 2020 NFL Draft is now only a day away, so let's go ahead and put out our final Philadelphia Eagles-only mock draft of the season. For this version, we used TheDraftNetwork's mock simulator, and then Brandon Gowton of BGN and I discussed each of our final mocks (his is here), in podcast form.

As a reminder, after the Darius Slay trade, the Philadelphia Eagles are projected to have 8 draft picks this year, with three in the fourth. Also, be sure to check out our previous editions:

In his two years as a starter at LSU, Jefferson racked up over 2400 receiving yards:

Jefferson is a savvy route runner with experience both on the outside and the inside, who had no problem getting open at the college level, finding holes in the defense against zone, and separation against man coverage. That should quickly translate to the pros. While not a burner in the same realm of Henry Ruggs, for example, he proved at the Combine that his athleticism is a plus.

He wins inside and outside, and in the short, intermediate, and deeper levels of the field. On the "can the Eagles find targets for him" front, well, they found roughly 100 targets per season for Nelson Agholor, and if Agholor had merely made the plays that he should have made, how many more games would the Eagles have won?

Yes, the Eagles could certainly use a burner who can take the top off the defense. They also need receiver who can do everything else, and Jefferson would be a great start.

Winfield's father had a long NFL career with the Bills and Vikings. He was an undersized corner, but tough as hell, and a playmaker.

The younger Winfield, who plays safety, is a playmaker too, as he had seven INTs in 2019, fourth in the nation, to go along with two forced fumbles, with some of those plays coming in big moments or big games.

At the moment, on paper, the Eagles' safety spot isn't very inspiring. Rodney McLeod is coming off a bad season, but the team hopes that being another year removed from an ACL tear will yield better results. Opposite McLeod is Jalen Mills, who will be sliding into Jenkins' old role as a do-everything guy. That's a lot easier said than done.

The team did add a young No. 3 safety in Will Parks to the group, instead of opting for an old head in the mold of Andrew Sendejo or Corey Graham. And then there's Rudy Ford and Marcus Epps, who both stunk in their first year with the team in 2019.

The idea that this safety group is going to be good this season and beyond is nuts to me, and should a player like Winfield be available at pick 53, the Eagles should strongly consider using a valuable resource they don't typically reserve for the safety position.

Wilson had good career production at Wyoming, with 400+ career tackles, 10 INTs, 14 PBUs, and 5 forced fumbles. He is a well-rounded player with good ball skills in coverage who has a good chance to become a three-down linebacker in the NFL.

The Eagles' need at linebacker is rather obvious, and there should be a cluster of appealing options in the third round.

Bowden is a gifted athlete who transitioned from wide receiver to quarterback in Kentucky's sixth game in 2019, and led the Wildcats to a bowl game. He is one of my favorite players in this draft, because of his hyper competitiveness.

In Kentucky's bowl game against Virginia Tech, both teams did a lot of chirping the week of the game, leading to a pregame altercation in which Bowden punched a Virginia Tech D-lineman in the face. And then he ran for 233 yards on them in a 37-30 win, lol.

Now, I'm not saying it's a great idea to be punching guys during pregame warmups, but I do like the emotion, and think the Eagles could use an edgy player on their roster, with Malcolm Jenkins and (likely) Jason Peters moving on.

Bowden is an out-of-the-box special teams contributor, but he's a little unrefined as a receiver. His intangibles are worth the effort and investment in trying to make him into a contributing receiver.

MORE: Shander: Eagles' draft success hinges on one thing — taking a wide receiver in the first round

Strowbridge is listed at either DE or DT, depending on where you look. He has inside-outside versatility, and could fill a role similar to that of Michael Bennett in 2018. A look:

As you should expect at 275 pounds, he has good quickness relative to other defensive tackles.

A look at the Eagles' depth chart along their defensive line:

Above we have Genard Avery listed with the second-team D-line, but he is a situational pass rusher only. He is not a rotational defensive end who you want on the field on 1st and 10. Strowbridge would fill the hole left by Vinny Curry, and can maybe develop into versatile inside-outside lineman.

At 6'0, 247, Dillon is the biggest running back in this draft, and in his three years at Boston College, he put up big numbers in the run game, mostly because of his high number of carries:

That heavy workload could hurt Dillon's draft stock, as could his low yards per carry. For the Eagles' purposes, Dillon makes sense as a "between the tackles" runner. A highlight reel:

While obviously an inside runner who would complement Sanders nicely, Dillon also reminds me a little of LeGarrette Blount, for obvious size reasons, but also because he is surprisingly nimble for a 247-pound back.

MORE: The Eagles' top 10 options with their first round pick

Hodgins has arguably the best hands in this draft class. He catches everything, including his fair share of highlight reel grabs. Here's a good Twitter thread on his positives. He makes all the catches he should, and adds in plenty more that you wouldn't expect a receiver to make:

Isaiah Hodgins. 1.1% Drop rate and a 59.1% contested catch success percentage are very impressive. You will see from this thread that the variety of tough catches he makes speaks to a very special set of hands indeed. He is clearly a "no excuses" hands guy pic.twitter.com/sE8mcz3g4t

Of course, he ran a 4.61 at the Combine, which will turn some folks off, but give me a guy who can actually play football in round 5 over a track star who can run fast, but otherwise stinks.

Taylor is a long, lean, 6'8 offensive tackle with 36" arms, and good athleticism.

Taylor is a project, and there may be some growing pains if you rely on him to be your swing tackle early in his career, but his upside is tremendous.