The Eagles' top 10 options with their first round pick 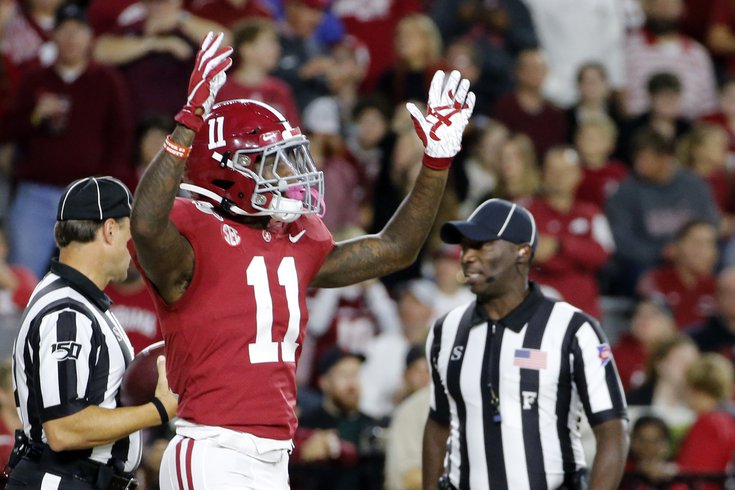 Three years ago, leading up the 2017 NFL Draft, we laid out the Eagles' top 10 options with their first-round pick. The Eagles' possible picks were much easier to narrow down then, as they were selecting 14th overall. We had "Sit tight and land Tennessee DE Derek Barnett" as our No. 3 option.

In 2018, the Eagles were drafting 32nd overall after winning the Super Bowl, so making predictions of who they might end up picking was more of a dart-throwing exercise. Still, a combination of options No. 1 (trade out of the first round) and No. 7 (draft Dallas Goedert) happened.

This year, it feels a little more simple — Find a receiver who can help Carson Wentz. However, there are a lot of different ways they can go about achieving that.

Here we'll rank the Eagles top 10 options with their first round pick, in descending order.

10) Trade it for Yannick Ngakoue

If it were up to me, I probably wouldn't even trade a 2. But just for the sake of thoroughness, let's go pro/con here.

• Ngakoue plays a premium position, and has been a productive pass rusher from Day 1 in the NFL, racking up 37.5 sacks in four seasons.

• He's durable. He has only missed one game over his career.

So those are some pretty good arguments.

• The Eagles have only made 10 picks in the last two years combined, which is tied for the lowest total in the NFL. Before the Darius Slay trade, they had 10 picks, and now they're down to eight (trust me, I did the math). If they trade their first-round pick, they'll only have two picks in the first two days of the draft. They would be pick No. 53, and No. 103, which is the comp pick earned for losing Nick Foles, and is actually the 39th pick in the third round.

• Ngakoue got franchise tagged, and is scheduled to make $17,788,000 in 2020. Surely the Eagles would not trade a 1 or a 2 for a player they haven't also done a deal with in advance. So what will the cost for a new contract be? Dante Fowler, a far less productive player who played in the same scheme as Ngakoue, just signed a $15 million/year deal. Ngakoue should be asking for something closer to $20 million/year.

• No matter what you or I may think of Brandon Graham and Derek Barnett as an edge-rushing duo, the Eagles love them.

So, sure, Ngakoue would be a nice addition. He's a very good player, who would certainly make a difference, but we're not talking about, saayyyy, a Khalil Mack-type player here. Given the Eagles' lack of good, early-20's players, their cap challenges in 2021, and their severe needs at other positions like wide receiver, it's just not a realistic idea.

They're going to use that pick in the draft.

While we all point out that the Eagles haven't drafted a linebacker in the first round since 1979, they haven't drafted a safety in round 1, ever. (Disclaimer: They did draft Roynell Young in 1980, a corner who eventually moved to safety.)

There are some good safeties in this draft who could be available in Rounds 2 and 3, but the pickings are slim in Round 1. The only possibility would probably be Alabama's Xavier McKinney, and if he were the Eagles' top-rated player at pick 21, you can be pretty sure they'd be doing whatever they can to trade back.

If you ignore positional importance and only focus on the depth chart, linebacker is the team's second-biggest need, at a minimum. There's even an argument to made that it's the team's biggest need, even ahead of wide receiver. As such, if you've read mock drafts over the last few months, you've seen more than your share of linebackers being projected to the Eagles in the first round, like Oklahoma's Kenneth Murray or LSU's Patrick Queen.

As noted above, the Eagles haven't drafted an off-ball linebacker in the first round since 1979. They have only drafted two linebackers, at all, since Howie Roseman, Doug Pederson, and Jim Schwartz have been in place. One (Nate Gerry, fifth round, 2017) was a safety in college, and the other (Joe Walker, seventh round, 2016) was the third-to-last pick of the entire draft.

A common argument that I've seen in favor of drafting a linebacker is that the Eagles play in the same division as Ezekiel Elliott and Saquon Barkley. While I respect that observation, I would have two counter-arguments:

While I do think the Eagles will take a linebacker in the 2020 draft, and possibly even as high as Day 2, I believe the Eagles are right not to value linebackers, and taking Murray or Queen in the first round would be a bad use of resources.

The first is DT Javon Kinlaw, who the Eagles felt was the best non-quarterback at the Senior Bowl. Kinlaw only participated one day during the week of practices, thoroughly dominated, and was like, "Yeah, I'm done here, K thanks bye." If there were no medical concerns, there would be a near zero percent chance of him falling to pick 21. With those concerns, there's a small, but very unlikely chance that he falls. If he did, the Eagles would have to at least consider him.

And then there's something of a doomsday scenario in Iowa DE A.J. Epenesa. Let's say the following three things occur:

Ugh. In that scenraio, you're just going to have to make a pick, and Epenesa would make sense in that bad scenario.

In the "can't trade up, nobody worth picking at 21, can't trade back" scenario noted above, the other position worth considering is cornerback. OSU's Jeffrey Okudah and Florida's C.J. Henderson will both be gone by then, which would leave guys left Clemson's A.J. Terrell, TCU's Jeff Gladney, LSU's Kristian Fulton, and Utah' Jaylon Johnson left over.

Again, that would be another wholly unsatisfying outcome. The better value for corner is in Rounds 2 and 3.

5) Find a guard/tackle for the future

In 2019, Andre Dillard was not expected to be available anywhere near the Eagles' pick. When he slid (and possibly for good reason), the Eagles aggressively traded up for him. Could that happen again in 2020?

It's pretty unlikely that any of the four top offensive lineman -- Mekhi Becton (Louisville), Jedrick Wills (Alabama), Tristan Wirfs (Iowa), or Andrew Thomas (Georgia) -- will fall as far as pick 21.

Some are projecting Wirfs and Thomas to guard at the next level. Their additions to the Eagles' roster could be three-fold:

But let's be honest. Even if the value is there, nobody is going to be happy with another offensive lineman.

And here is where we enter the wide receiver section...

Should the Eagles attempt to make a substantial trade up for a receiver they really, really like, whether that be Oklahoma's CeeDee Lamb, Alabama's Henry Ruggs, or Alabama's Jerry Jeudy, they could try to get way up in the draft order to do so.

There do seem to be some teams motivated to trade down, like the Browns at 10, or the Niners at 13, but a trade up for the Eagles would almost certainly also have to include their second-round pick.

We already noted in the Ngakoue section that the Eagles have only made 10 picks over the last two drafts, and have a serious dearth of cheap, "under 25" talent on their roster. Parting with a second-round pick would be too big a cost, in my view.

3) Trade back, land a "next tier" receiver and more picks

If Lamb, Ruggs, Jeudy, and LSU's Justin Jefferson are all gone, the Eagles could try to trade out of the 21st pick to a spot later in the first round, or into the second round, where they could take one of the receivers in "the next tier." Such receivers could include Arizona State's Brandon Aiyuk, Baylor's Denzel Mims, TCU's Jalen Reagor, Colorado's Laviska Shenault, or Clemson's Tee Higgins, to name a few.

The most likely selection in this scenario would be Jefferson, in my view. Or maybe they get super lucky, and one of the "top three" falls. Or maybe they reach a bit for one of the aforementioned "trade back" receivers, if they really like one more than the rest and don't want to lose them because they got too cute.

1) Modest trade up for a receiver

I think the most likely scenario is that the Eagles find a trade partner within five or six draft slots of their pick at 21, whether that be for Jefferson, or an unexpected slide by Lamb/Jeudy/Ruggs. The sweet spot to me would be Oakland at pick 19, if the Raiders take a receiver with their first of their two first-round picks at 12th overall, and they think they'd still get whatever player they want at 19, two spots later at 21. In that case, maybe the cost to move up is only something like the third round comp pick (103 overall)?

That would be a reasonable cost to ensure the Eagles get a top receiver that they actually want, as opposed to one they feel like they'd have to "settle for."