Mailbag: What could the Eagles fetch in return in a Rasul Douglas trade? 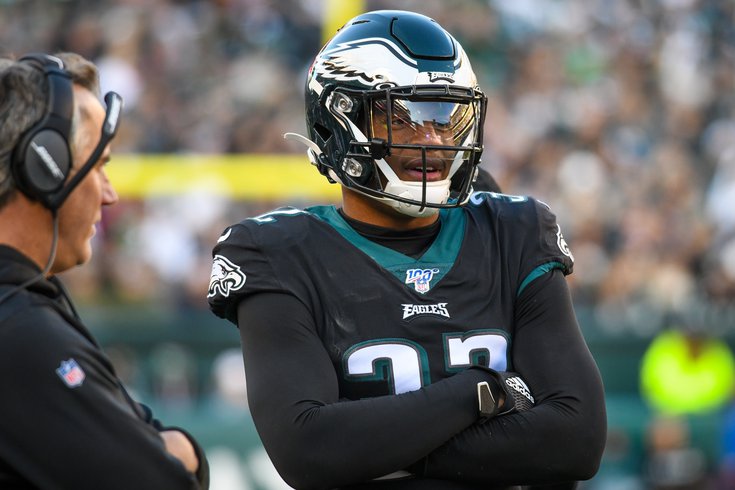 Rasul Douglas during the Philadelphia Eagles game against the Chicago Bears at Lincoln Financial Field in Philadelphia on November 3, 2019.

In our Eagles chat last Wednesday, there were a lot of questions that we could not get to in time or other questions we did answer but could use more color. And so, let's do a mailbag post to answer some of the overflow, as well as some commonly asked questions on Twitter and via email.

Question from nobody specific: What could the Eagles potentially receive in return if they were to trade Rasul Douglas?

The PPE is a fourth-year salary escalator (for players drafted in the third round or later) that can be earned by participating in either 35% of a team's offensive or defensive snaps in two of his first three seasons, or in 35% of all offensive or defensive snaps over his entire first three years. Players eligible for the PPE will see their fourth year base salary escalate to the lowest restricted free agent (RFA) tender for that season.

It wasn't hard to decode recent comments from Howie Roseman that Douglas is not worth $2,309,572 to the Eagles, as he is arguably sixth in the pecking order at corner. The Eagles will save $2,133,000 if they release or trade him.

If Douglas isn't worth that money to a CB-deficient team like the Eagles, then he's probably not worth that to anyone else either. The belief here is that while there is no rush to do so, Douglas will eventually get released, unless the team suffers a bunch of injuries in training camp or something, whenever camp occurs.

Of course, there's always a chance some other team out there might be willing to overlook Douglas' obvious lack of speed, and will value his size, ball skills, and tackling ability. If so, then maybe the Eagles can fetch a late-round pick.

There's also a chance that the Eagles could find a trade partner in a team with a player who has also earned a "Proven Performance Escalator" bump in salary. OverTheCap.com lists those such players here.

Of that group, I would say some realistic possibilities are as follows:

• Ahkello Witherspoon, CB, 49ers: Witherspoon was benched in favor of Emmanuel Moseley during the Niners' stretch run last year. The Eagles reportedly had Witherspoon in for a pre-draft visit in 2017.

• Fabian Moreau, CB, Washington: Moreau has been something of a disappointment for Washington since they drafted him in the third round in 2017, though he did show some life in 2019. Meanwhile, the Panthers drafted several bigger corners when Ron Rivera was the head coach in Carolina, like James Bradberry (6'1, 212), Daryl Worley (6'1, 215), and Rashaan Golden (6'0, 200), so Rivera may value a guy like Douglas more than others.

Question from JPP’s Index Finger: Besides Rasul, anyone in play to be moved as part of a draft weekend trade?

Specifically during the draft? It's hard to come up with anyone without just totally throwing darts. However, if the season is delayed, and Alshon Jeffery recovers from his foot surgery, they may have a puncher's chance of unloading him on someone.

Question from a bunch of people on Twitter: The Bears released Trey Burton. Should the Eagles have interest?

Absolutely they should. He was a core special teamer in his time in Philly, and would be an ideal TE3. There's also this, on the financial aspect:

Trey Burton underwent off-season hip surgery and is expected to be ready well before training camp, per source. Bears still owe Burton $4 million, so it’s not likely he will cost another team very much. https://t.co/VFSs6bzrXt

Burton is almost certain to sign a minimum contract, which would be less than a million this season for his new team, and the Bears owing him the remainder of the $4 million referenced in Schefter's tweet above.

From Burton's perspective, however, there are surely better opportunities around the league to get playing time than he would get in Philly, behind Zach Ertz and Dallas Goedert.

Question from DB: If one of the big-name OT’s slip to 21, does Howie honor his board and take him?

I haven't done much homework at all on those guys, seeing as the Eagles traded up for Andre Dillard in the first round a year ago, even if Dillard had a bad rookie season. It's also pretty unlikely that any of the four guys you're referencing -- Mekhi Becton (Louisville), Jedrick Wills (Alabama), Tristan Wirfs (Iowa), or Andrew Thomas (Georgia) -- falls that far.

But, if they did, if there were a case to be made for one guy over the rest, for me it would be Wirfs, who some are projecting to guard at the next level. It would be really hard to pass on this athleticism:

Jason Kelce finally announced that he intends on playing in 2020, three months after the Eagles' season ended. That decision took a long time, and it feels like this could be his last year. If you take a guy like Wirfs, you're maybe getting a Pro Bowl player to fit right in at LG, with Isaac Seumalo moving inside to center. Wirfs would also maybe provide "bust insurance" for Dillard at LT.

Question from Long Blount: Why are the Eagles still holding No. 25? Shady was good for the Eagles, but not at that level.

Yeah, I'm with you on that one. Shady was obviously a great player when he was in Philly, but I think you retire numbers when it's a no-brainer decision, like it was with Brian Dawkins.

By the way, nobody has worn 87 since Brent Celek retired. That's even more silly.

Question from KimmyJempski: Why do you look so different if you Twittier pic vs PhillyVoice pic? Are there two Jimmys? Is one of them evil?

My PhillyVoice profile pic was taken around 2015, maybe 2016? I was around 230 pounds back then. In my Twitter profile pic, I was probably under 2 bills. A month into quarantine I’m back up to around 215 or so. I gotta get it together. So there’s your Jimmy Kempski fluctuating weight update.

Question from Stumpy Pepys: How much fun will it be to watch Gettleman try to figure out the online draft?

He’s 100 percent going to be the guy in your fantasy football draft who can’t figure out how to make his pick in time, has the computer auto-pick Tua Tagovailoa for him, and he frantically messages the commissioner in the trash talk window to pause the draft and back it up a pick.