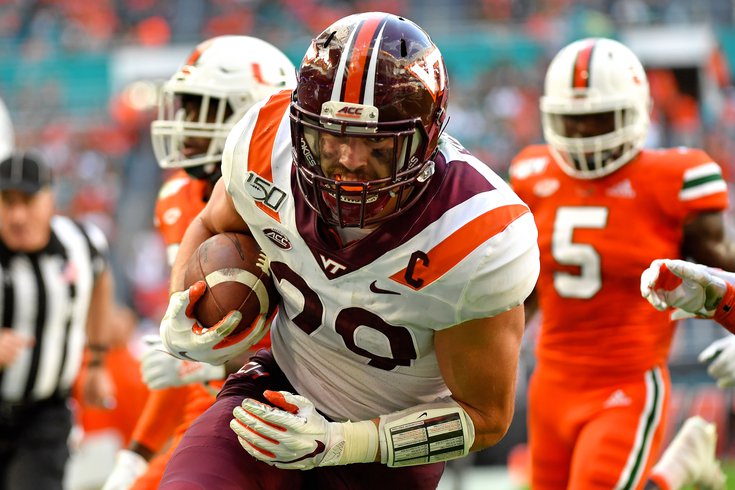 Virginia Tech's Dalton Keene makes sense as a Day 3 prospect who reminds me a little of Trey Burton.

Today we'll look at a position that isn't much of a need, tight end. First, the depth chart:

In Ertz and Goedert the Eagles have the best 1-2 tight end combo in the NFL. As such, they are primed to run a whole lot of two-TE sets, as they did in 2019.

If the Eagles are going to commit to a two-TE base offense for the foreseeable future, then they would be smart to add someone better than Josh Perkins as a third TE for depth. If they fear that Ertz's contract demands are going to be too lofty, then they would be smart to find a tight end who can play his role in the offense, should he no longer be on the team after his contract expires during the 2022 offseason.

It's highly unlikely that the Eagles will take a tight end before the third day of the draft, if at all.

Some tight ends who make sense for the Eagles

Okwuegbunam ran a 4.49 40 at 258 pounds, and in three years at Missouri, he caught 23 touchdown passes, which is outstanding production for a tight end. Some of those TD catches were of the impressive variety:

Most have Okwuegbunam pegged as a Day 3 pick because of some competitive concerns. For example, there's this, from Lance Zierlein of NFL.com:

Okwuegbunam will force evaluators into deciding priorities as his pros and cons list is fairly polarizing. His routes are raw and inefficient. He isn't difficult to cover when he's asked to gather and break, but he has speed to separate on over routes and seam attacks when he opens and goes. His ability to win with the ball in the air -- especially in the end zone is outstanding. He's not a physical blocker and is better suited as a move tight end. Scouts question his overall toughness as a player, but the potential is very high, which makes him a classic boom-or-bust prospect.

If Okwuegbunam is still available in the area of the Eagles' fourth round comp picks, he's a guy with intriguing enough ability in the red zone that he's worth the gamble.

Keene is a versatile piece who lined up all over the formation for Virginia Tech, and probably wasn't used as much as he should have been in their offense (21-240-5 in 2019), given his good athleticism, soft hands, and ability to fight through tacklers for extra yardage.

I like him in a similar role to the one Trey Burton had in Philly.

Sullivan is a wide receiver-turned-tight end who didn't get many opportunities in LSU's star-studded offense, but he was impressive during the week of Senior Bowl practices. Linebackers couldn't cover him (not surprising), and he looked decent as a blocker (surprisingly).

Sullivan would make sense in a role similar to that of Perkins, in that he can give you snaps both at tight end and in emergency situations, wide receiver.