What they're saying: The latest on Alshon Jeffery, Yannick Ngakoue and the Eagles' draft plans 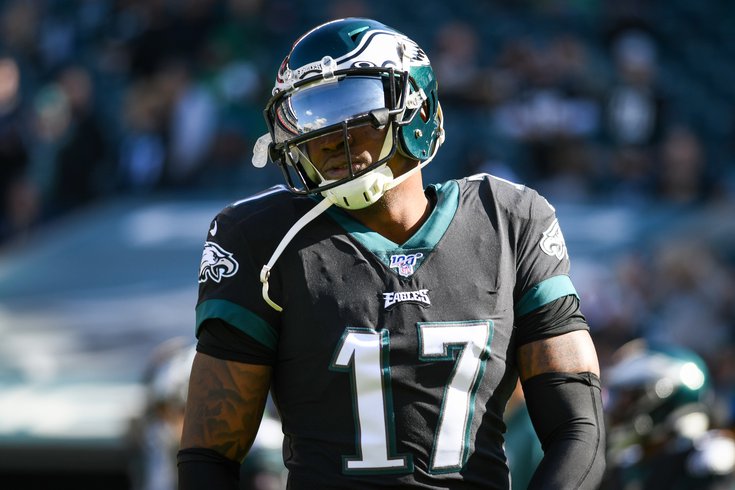 As our society continues to remain socially distant amid the COVID-19 outbreak, there has been one sliver of hope helping diehard sports fans avoid complete and total withdrawal — the NFL.

And even though free agency is all but over, the NFL Draft is right around the corner, as it's set to kick off, albeit virtually, in two weeks from tonight. That means two more weeks of mock drafts, analysis and trade rumors to keep you busy as you try to distract yourself from what's going on in the world around you. And, because the NFL machine never stops, that will be followed by a litany of draft grades and depth chart analysis — all months before we ever see any of these players step onto an NFL field.

So, with little else going on in the world of sports, let's take another look around at what the experts are saying about the Eagles, from free agency to the draft ... and even some power rankings. Let's dive in...

No chance at Yannick Ngakoue?

On Wednesday, ESPN NFL insider Adam Schefter was on the 97.5 Morning Show with Mark Farzetta and Bob Cooney to discuss the Eagles offseason, the draft, and all the latest news and rumors surrounding the Birds.

One of the big topics of discussion this offseason has been whether or not the team is interested in Jaguars defensive end Yannick Ngakoue, who has been hit with the franchise tag by his current team, but desperately wants out of Jacksonville and has said so publicly, including his Tuesday appearance on NFL Live when he said he just wants to go to a team with a "winning culture."

Ngakoue has also publicly been making a plea for Philly to acquire him, posting photos of former Eagles players on social media, an Eagles emoji, and even a photo of a cheesesteak saying that he needs to try one. He's also liked several tweets talking about him possibly playing in Philly.

Unfortunately, the decision on where the 24-year-old defensive end plays next season isn't entirely up to him. It's up to the Jaguars — and the 31 other teams out there that need to decide whether or not he's worth the steep price Jacksonville will likely require in a trade.

And when it comes to the Eagles, a trade has always seemed unlikely. They simply may not have the capital to get it done, and Schefter believes Ngakoue's a likely candidate to land elsewhere if he's indeed traded before the season.

Here's more from his interview on The Fanatic:

FARZETTA: Where are you now on Yannick Ngakoue and possible movement?

SCHEFTER: I still think the team, the Jaguars, have to move him during the draft. The week of the draft, during the draft. My guess is these are usually deals that are made often while teams are on the clock. They’re going to want back significant compensation for him. It remains to be seen how much they actually will get back. There will be people in that organization like the owner who will not want to move him, which means they’ll be firmer in their price. But if they don’t trade him, they’ve got a mess on their hands. And I believe the guy, the player, when he says that he doesn’t plan to play for them again. I believe he will continue to sit. So, that’s not good for anybody. I think the right thing for them to do, logistically, is to move on from him. And so they’re going to want a first-round pick, maybe then some for him. I don’t know whether they’ll get a first-round pick for him or not. We’ll see how it shakes out. It could be swapping draft spots. It could be swapping picks. It could be any combination of factors that get a deal done.

Now, in the end, I would guess that they do trade him. Because I think they have to. I think that’s the best thing for everybody involved. I don’t think they want that headache on their hands. I think the owner will see that eventually.

Of those teams, I don’t think the Eagles are the favorite in that group at all. I think that more likely than not, those other teams — for various reasons: picks, compensation, money, draft position — stand a better chance of landing Yannick Ngakoue than the Eagles. I view the Eagles on the outside looking in of Yannick Ngakoue. That’s not to say that they couldn’t get something done because anything is always possible with them. But I don’t view them as a likely destination for Yannick Ngakoue going into the draft.  [h/t bleedinggreennation.com]

You can listen to the full interview on The Fanatic here.

What's up with Alshon?

In addition to discussing the Eagles' chances of landing Ngakoue, Schefter was also asked by Farzetta and Co. about the future of wideout Alshon Jeffery in the wake of a report that the Birds have been "actively shopping" Jeffery since last October, just a month after guaranteeing his salary for the 2020 season.

While the fact that Jeffery is still on the roster could be an indication that the team will try to keep him — after all, it's hard to move a guy who is recovering from season-ending foot surgery and likely won't be back until at least the start of the season or possibly later — but Schefter thinks Howie Roseman could be patiently sitting back and waiting for the right time to strike. Here's more from Schefter, with special thanks to Brandon Gowton of Bleeding Green Nation for the transcription.

MARC FARZETTA: What have you heard about Alshon Jeffery?

SCHEFTER: Well, I just know that they’d be open to moving him. I don’t know when it started. I don’t know how it relates to his contract. I’m sure Jeff [McLane’s reporting] would be right. But I haven’t checked into that so I don’t know.

I would just say that, in an ideal world, something would come about. His name has come up in trade talks with other teams.

And while I do think they’re open to moving on from him, and I guess we all think that they’d like to find a trade partner, I also don’t rule out the idea that if nothing materializes [now], that they’ll just sit there and hold on to him as a commodity and if they can’t move him now, you know what, guess what, during training camp — if there’s training camp — some team may lose a wide receiver and may be hungrier for a wide receiver at that point in time.

So, again, I don’t know that that has to happen now, though I’m sure they’d like to make it happen now in a perfect world.  [h/t bleedinggreennation.com]

And, as a reminder, you can listen to the full Schefter interview on The Fanatic right here.

There's been a lot of talk this offseason about the loaded wide receiver class in this month's NFL Draft and, specifically, how the Eagles are going to attack it. And one name keeps popping up for the Birds again and again: Justin Jefferson.

Last week, Paul Domowitch of The Daily News said he was a no-brainer and "the easiest pick general manager Howie Roseman has made in his career." Several other Eagles reporters have also noted the team's interested in Jefferson. And in his mailbag earlier this week, our own Jimmy Kempski wrote that if Jefferson was on the board at 21, he will be the pick for the Eagles.

National writers are also of the belief that the Birds will select Jefferson. Bleacher Report's Matt Miller is so confident that Philly will land Jefferson, that he's penciling him in at No. 21 regardless of what happens before the pick — and that includes Jefferson going off the board, as he thinks the Eagles are so high on him that they'll make a trade for him even if he gets selected before their pick. That's some confidence.

With that in mind, it's worth taking a look at how Jefferson would fit in with the Birds current crop of wideouts.

How he would fit: Based on what the Eagles currently have, Jefferson would need to come in and play immediately. We all know the questions about whether or not he can play outside (they’re legitimate questions and concerns), but the Eagles need all types of receivers right now and that includes slot guys. So in his rookie season, you could expect to see most of Jefferson’s work to come inside but the Eagles would then add more and more to his plate.

What Ward was able to do last season was very impressive, but the Eagles can’t hesitate to pull the trigger on Jefferson because they have Ward in the slot. Sorry. If the Eagles view Jefferson as a first-round pick, they have to take him and they have to get him on the field this season.  [nbcsports.com]

Of course, the Eagles haven't done any offensive upgrading this offseason, and after losing a few players, they're going to need more than just a wide receiver before the start of the season.

One of those positions is running back, and they don't necessarily have to address that position in the draft — especially if they want to add some experience to the room — but it might not be a bad place to start.

But the Eagles might have to sign a veteran on the cheap, like they did in May 2017 when they added LeGarrette Blount, or last spring when they traded for Howard, who was still on his rookie contract.

A running back could come in the draft as well.

If the Eagles are looking for a versatile runner and receiver in the mold of Sproles, they could draft Memphis' Antonio Gibson, who played both wide receiver and running back in college.

Gibson, at 6-feet, 228 pounds, is much bigger than Sproles, and he ran a 4.39 in the 40 at the NFL combine. Certainly, he would be intriguing to the Eagles.  [delawareonline.com]

And, finally, we get to some offseason power rankings, courtesy of CBS Sports' Pete Prisco. After free agency, the Eagles have seen their stock rise, but the Cowboys have kept pace with them, also moving up four spots. Here's a look at where the Birds stand in the rankings, as well as the teams closest to them.

They brought in a good free-agent class to help a team that is the division favorite. It's all about the growth of Josh Allen as to how far they can go.

They were gutted by injuries last season, so health will be the key. Adding corner Darius Slay in a trade will really help the defense. Now they need to add a receiver.

They got hit some on defense in free agency -- losing Byron Jones is a big hit -- and then center Travis Frederick retired. They did bring back Amari Cooper for the offense.  [cbssports.com]

In case you're wondering, both the Giants and Washington are ranked in the bottom four, with the latter ranking last.