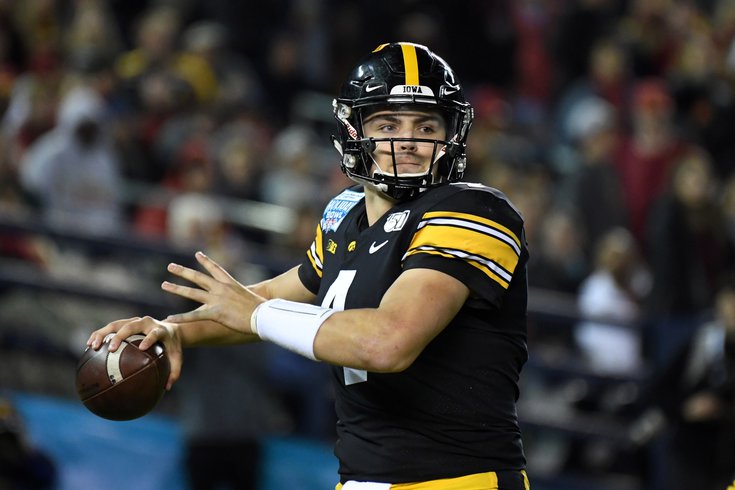 Nate Stanley is big and he has a strong arm, which is probably enough for the Eagles to have interest.

We'll start with quarterback, which is among the lowest positions on the Eagles' draft need totem pole, but still a potential spot that could be addressed with a developmental player. First, a look at the depth chart:

Around this time last year, Nate Sudfeld was the clear favorite to be the Eagles' No. 2 quarterback for the upcoming 2019 season. However, he broke his wrist in the preseason, and was expected to miss the first 2-4 weeks of the regular season.

The options after Sudfeld were guys like Clayton Thorson and Cody Kessler, who both stunk in training camp and the preseason games. Unwilling to take the chance of either of those two guys having to play in an actual regular season game, the Eagles signed Josh McCown out of retirement to fill that void, and Sudfeld never regained that No. 2 job when he returned.

A year later, the Eagles are essentially right back in that same situation. For now, Sudfeld is the No. 2, and the Eagles could be looking to draft a developmental quarterback, like they did a year ago with Thorson. While the merits of that strategy are certainly debatable, drafting a quarterback is in play.

As for who the Eagles might have their eyes on, they clearly have a type. They love them some big quarterbacks:

Some quarterbacks who make sense for the Eagles

To note, these are all Day 3 guys who should be drafted no sooner than the fifth round, in my view.

Stanley is a traditional big, inside-the-pocket quarterback with a strong arm. Note the nearly 60-yard throw while moving to left at the 0:21 mark below:

Of significant concern would be his 58.3 percent career completion percentage, and 7.2 yards per attempt. Bleh.

Still, if I had to identify one quarterback the Eagles are most likely to take, Stanley would be the guy, though I do have reservations about having two backup quarterbacks named Nate.

Again, Montez is big, he has a strong arm, and he showed off some athleticism at the Combine:

The two big concerns with Montez that continually pop up in scouting reports:

Like Stanley and Montez above, Morgan has a live arm, but some accuracy issues. He loves to fire it, but if you're looking for pretty touch throws, forget it.

Morgan is my favorite quarterback in this group, because I think he probably has the best arm, and has displayed impressive toughness, playing through injuries in 2019. You either have that, or you don't, and I think the touch throw issues are somewhat fixable.

He doesn't have the same arm strength as the rest of the players noted here, but it's not awful, either. He does have better accuracy, and experience in a pro-style offense.

Once again, the 6'4 height is good enough, and look at the athleticism:

Also, he had long hair at Hawaii:

As you can see in the above video, his mechanics need a major overhaul. I wouldn't draft him, but I do kinda like him as a long-term project if he's available after the draft.