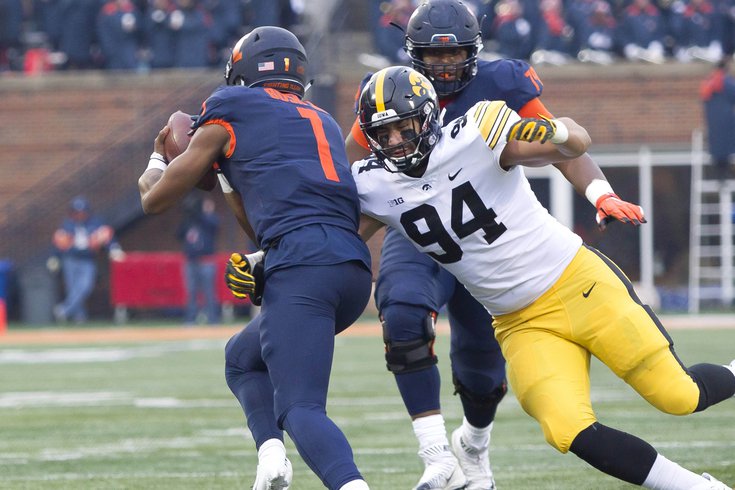 Iowa's A.J. Epenesa is a good player, but would be an unsatisfying first-round pick.

Today we'll turn our attention to the defense, beginning with defensive end. First, the depth chart:

Broken record alert here, but no matter what you think about Brandon Graham or Derek Barnett, the team loves them both, and they're going to be the Eagles' starting defensive ends in 2020. Beyond Graham and Barnett, Josh Sweat took a small step forward in 2019, and the Eagles will hope his progress accelerates in 2020.

And then they have a slew of guys thereafter, like Genard Avery, Joe Ostman, Shareef Miller, and Daeshon Hall, that they probably like a more than you do.

Still, the Eagles love drafting edge rushers. Excluding the three years (2013-2015) under Chip Kelly when the Eagles ran that foofy 2-gap 3-4 defense, the Eagles have drafted eight defensive ends overall since Howie Roseman became the GM in 2010, and at least one every year, except 2011.

The expectation here is that the Eagles will once again dip their toe into the defensive end pool.

Some defensive ends who make sense for the Eagles

Epenesa was very productive in college, registering 22 sacks, 8 forced fumbles, 6 batted passes, and 30.5 tackles for loss the last two seasons. He managed 11.5 sacks in 2019, despite being the focus of the opposing offense's attention.

While I believe that the Eagles will shy away from college production players at some positions after some failed picks, like Donnel Pumphrey, for example, they still believe that players who get sacks in college get sacks in the NFL.

Epenesa has great size and power, who wins with hand fighting and bull rushes, and who finishes at the quarterback when those opportunities present themselves. As expected, Epenesa didn't wow anyone during his Combine workouts, running a 5.04 40. However, you can see that he does have some explosiveness when the pads go on.

Anything other than wide receiver in the first round will no doubt disappoint a large number of Eagles fans, as it should, but I can see them going defensive line if the cost to trade up is too prohibitive, the value of the available wide receivers at 21 just isn't there, and no good offers to trade back emerge.

Lewis missed most of the 2017 season with a torn elbow ligament, and all of 2018 with a torn ACL. So, you know, there's that. However, he returned in 2019, and finished his college career strongly, collecting 11.5 tackles for loss and 6 sacks in 10 games.

If Lewis is available at pick 53, he'd be a projection, and an injury risk, but I have to imagine the Eagles would still be tempted.

On the Eagles belief that "sacks in college lead to sacks in the NFL" front, there's also Anae, who had 30 sacks over his career at Utah, and 13 sacks in his senior season. Anae lacks ideal length and athleticism, so if you're looking for a speed guy to smoke OTs arond the edge, he won't be for you. But, he's a skilled, violent player with (cringe alert for some) a great motor, ha.

He wrecked the Senior Bowl game, posting 3 sacks, and a QB hit that led to an INT.

Bradlee Anae has been the most impressive prospect in the Senior Bowl so far today. Chop-club to force an off throw from Jalen Hurts for the Malik Harrison INT. pic.twitter.com/t4qNS7xvaZ

Greenard is a productive pass rusher and run stopper who could slide to Day 3 because of his age (he turns 23 in May), his injury history, and his meh Combine.

Notre Dame has a pair of edge rushers who will be selected in the 2020 NFL Draft, and Kareem is the lesser known of the two. While Julian Okwara is more explosive, Kareem is bigger, more stout against the run, and he seems to be closer to what the Eagles prioritize in their defensive ends.