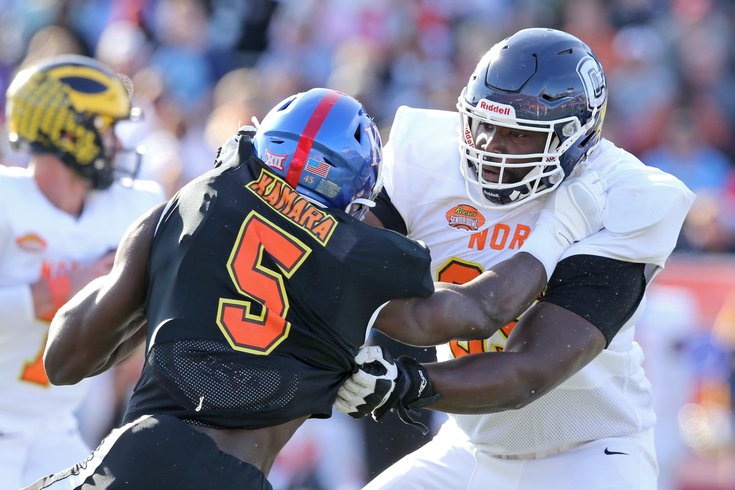 UConn's Matt Peart could be an out-of-the-box swing tackle for the Eagles.

Today we'll look at a position of sneaky importance in this draft, offensive tackle. First, the depth chart:

The Eagles have the best right tackle in the NFL in Lane Johnson. Beyond Johnson, there are a lot of questions.

Is Andre Dillard ready to take over for Jason Peters?

About a week after Doug Pederson enthusiastically stated at the NFL Combine that he wanted Peters to return to the team in 2020, the Philadelphia Eagles announced that they and Peters "mutually agreed" that Peters would test the free agent market.

It's probably the right move, seeing as the team spent heavy draft resources to land their left tackle of the future during the 2019 NFL Draft in Andre Dillard, and it would be nearly unprecedented for a first round tackle to sit for two seasons before getting a shot as the full-time starter. At some point, you have to take the training wheels off and let the much younger player sink or swim.

Of course, Dillard could have made the decision a lot easier if he showed more promise in the chances he did get to play in 2019, but there was more bad than good.

Who will be the backups at LT and RT?

Halapoulivaati Vaitai was a very useful player for the Eagles over the last four years, but he's now gone (and super rich), so the Eagles will have to decide what they will do to back up those spots.

When Jordan Maialta was wowing former offensive linemen during the 2018 preseason with his size and athleticism, it seemed like a good sign that the football newb would develop into a capable backup, at a minimum, and potentially a lot more.

After landing on injured reserve in each of the last two seasons, however, Mailata is heading into his third offseason with the Eagles, having never appeared in a regular season game. After allowing him to focus just on playing LT his rookie season, the Eagles attempted to cross-train Mailata at RT last year, an adjustment that was difficult for him.

Eagles OT Jordan Mailata on the difficulty of switching sides on the OL...

“It’s like wiping your backside with your other hand... It’s not going to be clean, but it gets the job done.”

Meanwhile, Matt Pryor has been cross-training at RG and RT for two years now, and he got his first taste of action in real games in 2019. There was some good, and some bad, and the bad (slow feet and recognition) are not ideal traits on the edge. In my view, he looked more like a backup "guard only" than a backup guard/tackle.

The Eagles could attempt to re-focus Mailata just on the LT position, and try to give Pryor more time this offseason at RT, which, if successful, would solve their swing tackle vacancy, but it feels a lot more like they need to add a legitimate swing tackle in the draft.

Some offensive tackles who make sense for the Eagles

Bartch was the only D-III player to compete at the NFL Combine, after a good week at the Senior Bowl. He enrolled in college as a tight end, but was asked to put on weight and move to left tackle, which he did without losing his athleticism.

In the pros, Bartch could probably play LT or LG, which makes him an interesting fit for the Eagles. In the short term, Jeff Stoutland could cross-train him at both spots, and Bartch could serve as depth on the left side of the line, as a backup to both Andre Dillard and Isaac Seumalo.

In the long-term, he could fill in as a starter for Seumalo at LG, with Seumalo moving to center whenever Jason Kelce retires. Or alternatively, Bartch could be a contingency plan at LT if Dillard busts, which feels like a possibility. In other words, Bartch would be a player worth developing who would give the Eagles options.

In that sense, it's easy to see his fit with the Eagles as a potential swing tackle replacement for Vaitai. Here he is against UCF this past season. He's the RT, No. 65:

At 6'7, with enormous 36 5/8" arms, he has excellent length for the NFL, and athleticism to go along with it. I think some team will view him as a starter, which means he could go Day 2. If he lasts into Day 3, the Eagles should have interest.

Taylor is a long, lean offensive tackle with good athleticism (he is a former basketball star) who competed at the Senior Bowl this year. Here he is against USF:

Taylor is perhaps a player who will need time to develop in the NFL before you could depend on him to be an out-of-the-box swing tackle, but he has a lot of upside.

Projected round: 4-5, but I could see a team wildly over-drafting him on Day 2.