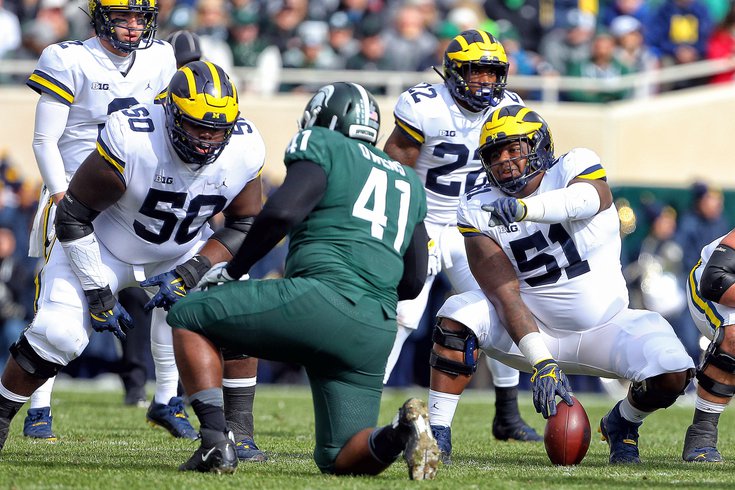 Michigan's Cesar Ruiz is thought of by many as the best center prospect in this class.

As it currently stands, there's an argument to be made that the Eagles have the best interior offensive line in the NFL, with three-straight first-team All Pro center Jason Kelce, three-straight Pro Bowl RG Brandon Brooks, and LG Isaac Seumalo, who struggled early in 2019, but overall turned in a pretty good season.

However, a report emerged last offseason that Kelce was mulling retirement, a notion that Kelce himself acknowledged. He then signed a new deal that runs through the 2021 season. It's noteworthy that we're already just about halfway through the month of April, and neither the team nor Kelce has said that he will be back in 2020, despite ample opportunity to do so.

One would think that Kelce and the team would know by now if he planned to return. It's possible that the team would prefer that not be public prior to the draft, for competitive advantage purposes. For example, if Kelce planned on retiring, interior offensive line help would become a more urgent need, and it wouldn't benefit the Eagles for other teams to know that. (To be clear, we're just spitballing here.)

At some point Kelce is going to retire, so the Eagles should continue to fill the OL pipeline. A guard-center versatile player would make sense in the short-term for depth purposes, and also as a long-term replacement either for Kelce at center, or for Seumalo at LG, should the Eagles simply slide Seumalo in to replace Kelce at center.

Some interior offensive linemen who make sense for the Eagles

Ruiz is a local kid who grew up in Camden, NJ. He is considered by most to be the top center prospect in this draft class. While there is no replacement for the type of unparalleled athleticism Kelce has displayed over his NFL career, the dropoff to Ruiz wouldn't be drastic.

According to Jeff Skversky of 6abc, the Eagles have shown a fair amount of interest in Ruiz.

Ruiz has spoken with the Eagles multiple times

The Camden, New Jersey native tells @6abc his mom would very happy if he goes to Philly#NFLDraft #Michigan pic.twitter.com/2PIeHtYRPS

Ruiz is a prospect who makes a lot of sense for the Eagles, because he has some guard-center versatility, and could theoretically replace Kelce without a lot of pain. However, for where he is likely to get drafted, Ruiz really only makes sense if Kelce has already decided to retire, and we just don't know it yet.

As a redshirt sophomore in 2018, Hennessy began wearing a single-digit number (No. 3), which Temple awards to the toughest players on the team. (Being a center, Hennessy can't wear the No. 3 during games, but he wears it during practice and on his helmet.)

He is thought of as very smart player and person (check out the Inquirer's Marc Narducci's piece on Hennessy here), but he is also a very athletic lineman. Here's his game in 2018 against Boston College:

Hennessy is tough, smart, and like Ruiz above, brings well above average athleticism to the table that would allow the Eagles to continue to run a lot of their same run concepts whenever Kelce retires. His spider chart:

Hunt has experience starting for the Rajin' Cajuns at LG, LT, and RT, so the Eagles are going to value that versatility. In the pros, Hunt is likely to primarily stay inside at guard, with the ability to play at OT in an emergency.

Watch him killing guys repeatedly against Georgia Southern. He's No. 50, the RT. Pancake city. I mean, I legit lol'd at least three times watching this:

He could play LG for the Eagles, with Seumalo sliding to center.

Biadasz is a nasty, intelligent center who is not going to get out in space and make athletic plays, but watch him move the line of scrimmage and put guys on the ground:

Biadasz has only played center at Wisconsin, there's little reason to believe he couldn't also fill in at guard. It's maybe at least somewhat interesting to note that NFL.com's Lance Zierlein comped him to Stefen Wisniewski.

You can see by Kindley's height and weight that he is a massive human being. He has also played both LG and RG for Georgia, so he does have left-right versatility, I suppose.

Kindley gets good push in the run game, though if you get him in space, he'll struggle with speed. Here's his game against Alabama last season. He's No. 66, the LG.

Kindley is just a guard prospect at the next level, and would of course fall into the "Seumalo moving to center" bucket.

Williams started at left guard in his sophomore (2017) and junior (2018) seasons, before moving to center his senior (2019) season. Williams is more of a rugged gamer than he is a player with impressive measurables from a size or athleticism standpoint.

Here he is against pro-level players vs. Alabama last season, playing LG:

To begin, Cohl Cabral is an awesome name that sounds like a bad guy in a kids cartoon, so there's that. He also fits the profile of a versatile offensive lineman that the Eagles look for in the draft. As a sophomore in 2017, Cabral was the starting left tackle. In 2018, he moved to center. In 2019, because of the absence of ASU's left tackle, Cabral had to move back to left tackle.

Cabral's future in the NFL will likely be at center, but he has the smarts and experience to play multiple positions along the O-line.