What they're saying: Eagles QBs not among NFL's Top 10 and debating the WR options in the draft 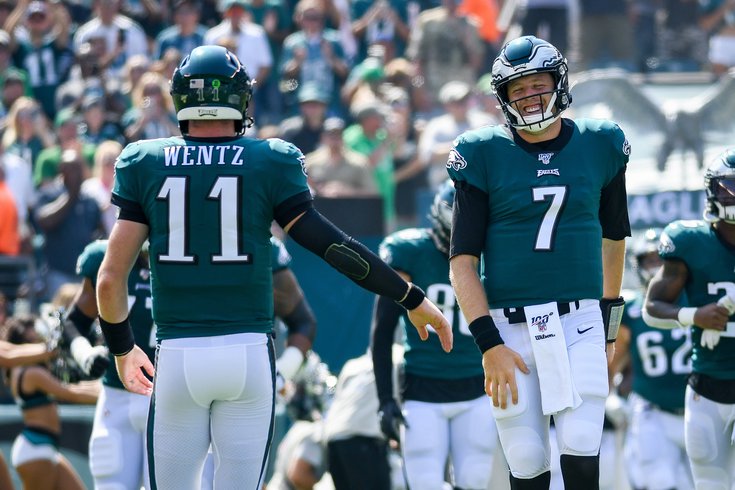 As of right now, Nate Sudfeld is a Carson Wentz injury away from being the Eagles starting quarterback.

Believe it or not — and because time has ceased to have any meaning in this socially distant COVID-19 world, I'm not sure where you'll land on this — but the NFL Draft is now just 10 days away.

Right now, it's about the only thing the sports world has going for it as other leagues remain shut down while we wait for it to be safe enough for games to continue. But with the NFL currently in the offseason, we've at least been able to get some semblance of normalcy in an otherwise unrecognizable sports landscape. The NBA and NHL are trying to figure out if they're going to be able to finish their current seasons or cancel them entirely, while the MLB is looking at alternative formats to try to get their 2020 season under way as soon and as safely as possible.

But the NFL, for now, continues to march on toward the draft — although the workouts that typically follow throughout the spring and summer aren't going to happen on schedule, if at all — and so we figured it was as good a time as any to check in on what the local and national media has to say about the Eagles.

Before getting to some of the first-round options for the Birds (read: wide receivers), let's take a look at the position most closely linked to wideout, the quarterback. That's where we'll start today's edition of What They're Saying...

Over at MMQB, Conor Orr ranked all 32 NFL teams based on their current quarterback situation. Not their starting quarterbacks, but the position as a whole. And when it comes to the Top 10, the Eagles found themselves on the outside looking in.

It's interesting considering in the last couple of seasons, the Eagles have had one of the best quarterback situations in the league. Hell, in 2017 it was so good that their backup led them to a Super Bowl title. Of course, after another playoff run in 2018, Nick Foles left that offseason and the reins were handed over to Nate Sudfeld. But a wrist injury in 2019 forced the Eagles into signing a veteran to back up Carson Wentz, and the team went with Josh McCown, who nearly won a playoff game for Philly after Wentz was knocked out of the game. After McCown went back into retirement, the Eagles re-signed Sudfeld in free agency.

All that's to say that the Eagles have been a team that's placed a premium on having talented backup quarterbacks. But, at least right now, they have a huge question mark behind their starter. The Eagles believe in Sudfeld, but not so much that immediately returned him to the backup job last season once he was healthy — that role stayed with McCown. The Eagles could certainly add a veteran QB to the room before training camp, but for right now, it seems like the biggest thing keeping them out of the Top 10 is the fact that Sudfeld remains a relative unknown.

Despite the unfortunate timing of his playoff injury, Wentz managed to have his moment in Philadelphia last year, going for 10 touchdowns and 1 interception over the final five games with a decimated receiving corps to push the Eagles into the playoffs. His history of gutting injuries shouldn’t unfairly skew the fact that, at age 27, he is locked into a manageable long-term deal with a good head coach and a roster that should rebound.  [si.com]

Paul Domowitch of the Daily News wrote about the Eagles backup QB situation over the weekend and speculated some more about the potential of Howie Roseman bringing in another veteran to back up Wentz.

Just because the Eagles re-signed Sudfeld doesn’t mean they won’t eventually bring in a more experienced veteran to compete with him for the backup job. [...]

If the Eagles end up bringing back McCown or adding another veteran quarterback – Joe Flacco? Matt Moore? – to compete with Sudfeld, they probably won’t do so until after they have a better feel for a possible timeline for training camp and the season, assuming there ends up being one.

As the draft approaches, there's been little to know change in the prevailing belief that the Eagles will draft a wide receiver in the first round. But one of the big questions that's been asked recently is whether or not the Eagles will select one at 21, where they're currently scheduled to pick, or if they'll trade up to get their guy — or even down to get back some of the picks they spent in free agency.

As Tim McManus wrote for ESPN, Howie Roseman has a history of making trades in the first round of the draft, and with so many receivers to choose from — not to mention the fact that by not signing a WR this offseason they've shown their hand — there's a good chance Roseman has to again do some deals if he hopes to land the right guy.

But who is that guy? Well, it depends who you ask ... and what day you ask them.

Whether it's a pretty significant trade up for Ruggs, or a smaller one for Jefferson, moving up will ensure they land a top-tier impact player.

It's a deep class, so the Eagles can still find difference-makers if they miss out on Ruggs and Jefferson. Players like Brandon Aiyuk, Jalen Reagor, KJ Hamler and Denzel Mims are notable names in the next wave of receiver talent that fit what the Eagles are looking for. However, they're largely projected to go after the Eagles pick at 21 and before they're back on the clock at 53 in the second round.

A small trade back in this scenario would net the Eagles more draft resources (they gave up a pair of picks last month to acquire cornerback Darius Slay from Detroit, knocking their stockpile of picks from 10 to eight) and still allow them the chance to take one of the above players without over-drafting them.

Roseman has a trade-happy history in Round 1. The Eagles have moved either up or back in three of the past four drafts, and six times total since Roseman first became GM in 2010.  [espn.com]

RELATED: Ranking the top 40 WRs the Eagles should target

Justin Jefferson is a slot machine

One of the guys most linked to the Eagles in recent days has been LSU product Justin Jefferson. One of the knocks on Jefferson, however, has been that he did the bulk of his damage from the slot and not lined up on the outside. But, according to Ben Natan of Bleeding Green Nation, that won't be a problem for the Eagles, who could find an immediate role for Jefferson in Doug Pederson's offense.

Is that a problem? Well, the question is whether or not Jefferson is what the Eagles need. Everyone and their mother wants Philly to add someone who can threaten on the outside and stretch the field, so while Jefferson is a very good prospect, the wonder is if he actually helps the Eagles. There is little doubt about Jefferson’s ability to contribute as a slot receiver and do so at a high level. Like at LSU, Jefferson will quickly become a quarterback’s best friend. He not only has dependable hands and toughness to make catches in traffic, he is also an incredibly smart player who knows how to attack soft spots in the middle of a defense.

It is actually quite easy to see Jefferson put up great numbers in Philadelphia. Carson Wentz showed last year that he is extremely good at throwing to the middle of the field and working as an intermediate passer. That ability was largely why the Eagles offense was able to survive the season despite not having any viable threats downfield. So replace Greg Ward Jr. or Nelson Agholor’s impact with Justin Jefferson and you have quite a dynamic short passing game.

It is rare that a passing game can be built from the short game outwards, but in the case of the Eagles; they could be an exception to the rule with Jefferson in the fold. The combination of Ertz, Goedert, Sanders and Jefferson as short and intermediate pass catching threats would actually be pretty overwhelming for the average NFL defense. That is a lot of size, speed and quickness for any combination of linebackers, safeties and slot cornerbacks to deal with. If Jefferson can immediately contribute as a slot receiver, which he should, the Eagles could have a mid-2010s Patriots style passing game with all the weapons they’d have to attack the middle field.  [bleedinggreennation.com]

Ben has profiled most of the top WR prospects in the draft, and today he took a look at Colorado's Laviska Shenault.

Tee Higgins the guy for Eagles?

Over at 94 WIP, Eliot Shorr-Parks is bullish on Tee Higgins, who he thinks brings something that the other players in his tier of WRs prospects don't —  the ability to dominate on the outside.

Here's more from ESP, who calls Higgins a "Julio Jones-like receiver." Maybe not in talent, but at least in what he'd be able to provide for Wentz...

Higgins, 6-foot-4, 219 pounds with long arms, can do it all and is much more than the 4.57 40-time he turned in at the 2020 NFL Combine. As the 2020 NFL Draft inches closer with other, less talented receivers flying up draft boards, Higgins might be the Eagles best chance at adding a Julio-Jones-like receiver for Wentz to develop with, much like Atlanta did for Matt Ryan years ago.

That isn’t to say Higgins is the same level of prospect as Jones, but what he does represent — which receivers like Henry Ruggs, KJ Hamler, Justin Jefferson and Jalen Reagor don’t — is the chance to be an elite, do-it-all receiver on the outside.

To start, Higgins has dominated every level of football he has played at and was the best receiver on one of the best two teams in college football the last two seasons. Going up against elite competition over the last two seasons, Higgins totaled 25 touchdowns and 2,103 yards on 118 catches. Not many, if any, receivers enter the draft with Higgins’ resume.  [94WIP.radio.com]