Eytan Shander: No matter who the Eagles draft, fans will likely get angry for no good reason 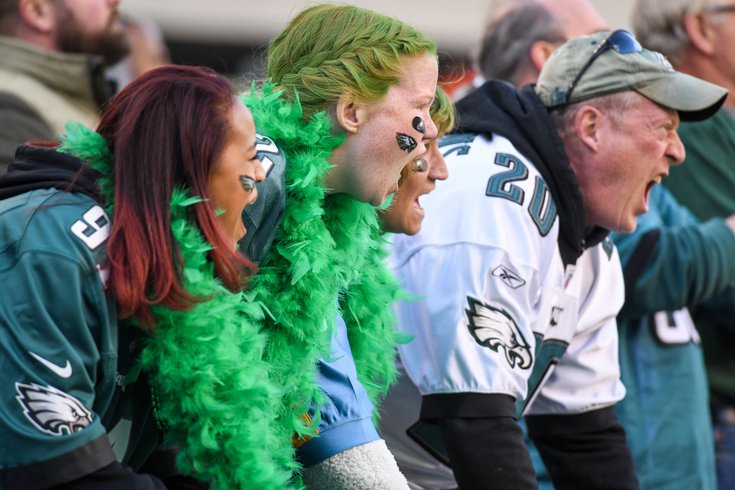 Eagles fans are hard to please.

Why do we do this? Each offseason we look at every single prospect who plays the position we want the Eagles to address in the first round of the NFL Draft. And all we're doing is building ourselves up for disappointment every single year.

And this year, that position is wide receiver. Some of it might be based on history — it's not like the Eagles have a long list of drafted and developed wide receivers – but a lot of it is on us. It’s not just the experts or the general managers or even the folks on Twitter providing some insight, it’s everyone who says the same thing.

It takes three years for a player to develop.

We know this… and still, it doesn’t matter. We write off guys right away, sometimes seconds after they’ve been drafted. Hindsight will always play a role here, and I’m sure someone’s thinking about Marcus Smith right now. We create narratives in our heads about who will fit and how, yet when it doesn’t work right away – or even worse it’s not the player we want – everything goes to sh*t.

“But Howie can’t draft [blank]!” Corners? Wideouts? Tackles? Which one is it this year?

I can’t keep doing this, which is why I’ve stopped tweeting about the NFL Draft. I’m out on this group psychosis pushing one narrative only to be devastated before OTAs even start. The party’s over, tell the rest of the crew. I’ll even meet you halfway, as I understand asking you to wait for anything over a three-year span is impossible, how about at least waiting until someone actually gets on the field? I don’t think it’s asking too much to wait for the first-round pick this year to play a couple of games before reaching your still-premature conclusion.

I’m not going down the list of names that prove you're insane to continue moving forward with the same incorrect line of thinking. Yes, the Eagles drafted Danny Watkins. They also drafted Smith and some other “forgettables." Do you stop drafting as a whole? It’s as ridiculous as saying the Eagles failed at drafting corners and receivers so many times that they should stop drafting that position.

Again, three years. That’s how long it takes to see what becomes of a draft class.

We can see signs right now that JJAW is struggling, not a good start for the young man. Sidney Jones proclaimed he’s going to have the breakout year we’ve all been waiting to see — cue your favorite sarcastic "OK" GIF.

We are at a point now where it starts to make sense to talk about JJAW not making it, even if it's still early. After all, he could barely get on the field as a rookie. We are at a deeper point in Jones’ career, a point where "bust" is a perfectly normal phrase to bring up. Despite us rooting for them – so long as they wear the midnight green jersey – we understand time has not been kind to either of them. Andre Dillard has a big role to fill this year, and there's going to be one of these conversations if he can’t make the jump expected of a first-round pick heading into his second season.

You know who isn’t at that point yet? The ILB the Eagles are going to inevitably take in the first round, no doubt upsetting a ton of people that it wasn’t a wideout.

Trust me, I’ve been there.

On a related note, next week I’ll have every single wideout the Eagles should draft in each round.

On a Personal Note

Hey, so I have a new show. Thanks to Jakib Media and SB Nation Radio (Gow Media) for allowing me to take my show to the next level… The Second Level to be exact. My new midday show airs 11 a.m.-1 p.m. Monday through Friday on SB Nation Radio. Best way to listen is download the app or go to sbnationradio.com. Please subscribe to my Twitch channel so you can watch everything for free!

I’m still hosting on Fox Sports Radio The Gambler from 6-8 p.m. on Mon.-Weds., writing the weekly column here, and appearing on FOX29’s Good Day. We are working on finding a local home in South Jersey in the next two weeks. If you’ve made it this far, thank you so much for your time. It’s one of the most valuable pieces of currency we have, and I’m grateful you can allocate some of yours to my work.

I want to keep this as open of a forum as possible. Please send any questions you have to my DM on Twitter @shandershow. Here's this week's update from my dad, Dr. Aryeh Shander.

Pop Culture Pick of the Week: Tales from the Loop

It’s not hard to find this show if you have Amazon Prime, as it’s plastered all over the home screen. After doing some research on the show – it’s based on paintings from Simon Stalenhag’s narrative artbook – I jumped into the deep end of this eight-episode show.

Spoiler: It’s marvelous on so many levels.

There are a couple of familiar faces in Jonathan Pryce and Rebecca Hall, but the beauty of this show centers around the strength of the entire cast. Everyone is connected in a small town – somewhere in the 80’s – by the “Loop” underground. The compound was designed to make the impossible possible. Pryce’s character runs it, yet everyone the show chooses to focus on leads a compelling storyline. It’s not by accident.

"Tales from the Loop" doesn’t rely on anything you’re used to today. It’s a throwback while providing a sci-fi element that stays true to the genre. Think of it as a non-violent cross between "Black Mirror" and "Stranger Things." What separates the Loop is powerful acting with nothing but believable dialogue and timely music. There really isn’t much else and it’s uniquely amazing.

Like "Black Mirror", the Loop introduces futuristic tech and focuses on humanity’s applications of it. One episode sees two teenagers stumble upon a large pod in the woods. Once one of them goes in, they wake up inside the other one’s body. Another episode finds a security guard at the Loop – after realizing he can’t find his place in town – restarting an old tractor, only to thrust him into a parallel universe. Not only does he find himself in this other universe, but they actually form a friendship.

Beyond the writing and acting perfectly syncing up, you get a memorable theme song for all the episodes. It’s such an easy watch that asks some interesting questions about humanity.

MORE: What's the best TV show to stream? Vote on our Final Four

• There is an AMAZING sleeve for your ankle and/or knee that has a unique and effective way of stabilizing during workouts. Doesn’t matter if you run, bike, or walk. GO Sleeves is for you! GET 15% OFF NOW AT GOSLEEVES.COM/SHANDERSHOW.

• Get $20 off your next live event at seatgeek.com – use code SHANDERSHOW

• If you live, work, or play in NJ, PointsBet has a crazy offer that’s only available through my code SHANDER. And you will get up to $1000 spread out over 4 bets ALL risk-free! Sign up any way or this link with the code already in.