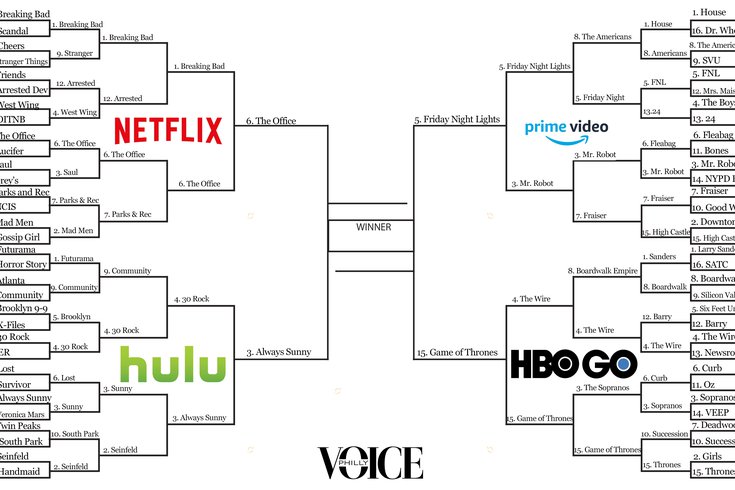 Our readers have spoken and the results are... interesting.

Four popular TV shows are still around as we have narrowed 64 TV streaming options to a Final Four after some incredibly close votes in the Elite 8.

We knew The Office and Breaking Bad would be a close one, but the pair were separated by less than one percent with Micheal Scott and company proving by a hair to be a more streamable gang than Walter White and Jesse Pinkman.

Though the seedings are no longer a matter of conversation, we want to remind you of our methodology, which involved ranking the below televisions shows based on their percentage of positive reviews on Rotten Tomatoes (hence why, after a hated eighth season, Game of Thrones snuck in as a 15 seed).

Obviously our readers have a short memory, as they've given Thrones a slim victory over critically acclaimed The Wire to win the ultra-competitive HBO Region.

Two other fan favorites are around for the final vote in Friday Night Lights (from Amazon) and It's Always Sunny in Philadelphia (which has somehow defeated Lost, Seinfeld and 30 Rock to make it to the Final Four).

So as you have for each previous match up, please vote below on the two that remain. We'll weigh in with our two cents, even though it's clear we have no influence whatsoever (all four of us picked Breaking Bad, fat lot of good that did).

6. The Office vs. 3. It's Always Sunny in Philadelphia

Evan Macy: Not my two favorite comedies — those were already knocked out by these two (Sunny beat Seinfeld? come on...). The Office is literally on in my house 24/7 and I cannot stand it (thanks, babe...). Always Sunny on the other hand, in my opinion is a very inconsistent but sometimes brilliant show that often relies too much on character and not enough on plot. When the show found itself in its mid-to-early seasons it really was fantastic, but I find myself disappointed in recent seasons. I've watched every episode once but have never re-watched. I'll be voting for the show I can tolerate but The Office will probably continue its march to a title.

Kyle Neubeck: Everyone who voted for The Office over Breaking Bad should be in a psych ward. Please watch another show, for the love of god I’m begging you.

Evan: I happen to be very fond of both of these TV shows. However, one was revolutionary and the last real piece of monoculture in our entertainment-fractured nation and the other decided to randomly make the coaches wife the school principle for some reason. FNL is fantastic but Thrones is an epic and contains some of the greatest television episodes ever made (I will always thing Battle of the Bastards is underrated). I hope Thrones has enough to beat The Office and it gets my vote.

Matt: I picked Game of Thrones in the last round over The Wire and still feel a little dirty about it. However, I think it's a safe bet that after that massive upset, Thrones is destined for the championship round. I've already revealed that I wasn't a big fan of Friday Night Lights, so it shouldn't be a surprise that I'm going Thrones again here.

Kyle: I guess we are all pretending the horrific final season didn’t happen.

Jimmy: A championship round including any of these four shows is simply wrong. I continue to be troubled with the way Americans vote.