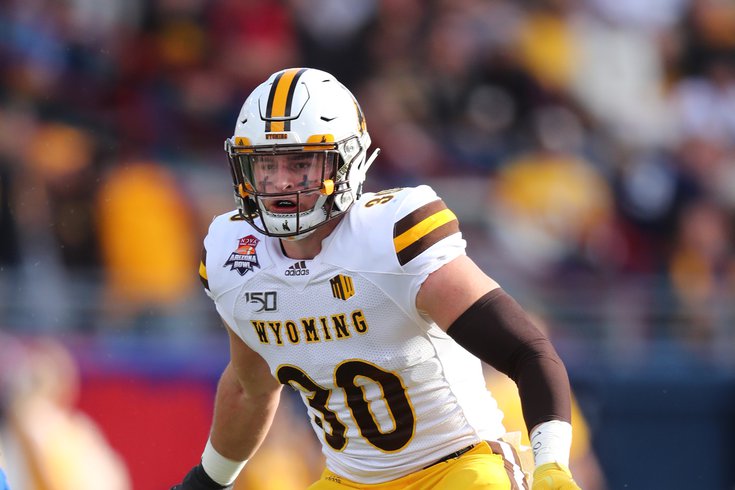 Wyoming's Logan Wilson is a solid all-around linebacker who excels in coverage.

Nate Gerry made strides in 2019, playing in all 16 games and starting 12. He still has some run defense deficiencies, but he has been good in coverage, which the Eagles prioritize at the position. He's a good bet to start once again in 2020. The team also likes T.J. Edwards, who had a high number of tackles (30), playing on 112 total defensive snaps, plus special teams. While he lacks ideal athleticism, he looked good against the run, and seemed to know where he should be in coverage.

But clearly, there's work to be done here. If you ignore positional importance and only focus on the depth chart, linebacker is the team's second-biggest need, at a minimum. There's even an argument to made that it's the team's biggest need, even ahead of wide receiver. As such, if you've read mock drafts over the last few months, you've seen more than your share of linebackers being projected to the Eagles in the first round.

However, as most of you know, the Eagles haven't drafted an off-ball linebacker in the first round since 1979. They have only drafted two linebackers, at all, since Howie Roseman, Doug Pederson, and Jim Schwartz have been in place. One (Nate Gerry, fifth round, 2017) was a safety in college, and the other (Joe Walker, seventh round, 2016) was the third-to-last pick of the entire draft.

While I do think the Eagles will take a linebacker in the 2020 draft, and possibly even as high as Day 2, you won't be seeing projected first rounders like Oklahoma's Kenneth Murray or LSU's Patrick Queen listed below.

Some linebackers who make sense for the Eagles

Davis-Gaither is a smaller, athletic linebacker with good coverage skills, who looks a little more like a big safety than a linebacker. In 2018, he had 7 pass breakups, which was eighth in the nation among non defensive backs. He had 8 pass breakups in 2019, and an INT, which shows some consistency in coverage.

He reminds me a little of meaner Kamu Grugier-Hill, in that he has the athleticism to contribute immediately as a core special teamer, but the Eagles would certainly want him to bulk up a bit before they use him in a prominent role in the regular defense.

A year ago, a prospect who made sense for the Eagles because of his ball skills, was Edwards, who had 10 career INTs, to go along with other impressive numbers, and really should have been a Day 3 pick.

This year, a linebacker prospect with similar size and production to Edwards is Wilson:

Wilson is more athletic than Edwards, and has a good chance to become a three-down linebacker in the NFL.

Dye is a long, lean, athletic linebacker with coverage and blitzing skills who led the Ducks in tackles each of the last four seasons. And yet, despite what his tackle numbers would indicate, Dye's biggest concern is his physicality in the run game, as he will far too often look to avoid offensive linemen as opposed to stacking and shedding them. The following highlight reel won't show those deficiencies, obviously:

Dye would fit well in the Eagles' defense as a coverage linebacker whose height will be plus against tight ends.

Taylor hasn't played much football, as religious beliefs kept him off the field until his mother finally allowed him to play in college. As such, he'll be a project for whatever team takes a chance on him.

What Taylor does have are very good athletic measurables.

Taylor should be an immediate special teams contributor, with a chance to grow as a player in the regular defense over time.

Quarterman is sort of a throwback, in that he's a physical badass, but there are questions whether he can be a "three-down" linebacker in the modern NFL. If this were 20 years ago, Quarterman would probably be a Day 2 pick. In the pass-happy version of the game today, teams would prefer their linebackers to be capable of covering running backs and tight ends, and there are questions about Quarterman's ability to do so.

That said, there's a lot to like about him. He's often playing harder than anyone on the field, which you like to see in a MIKE backer, and while he can't run sideline to sideline the same way the Cowboys' linebacker tandem does, Quarterman does seem to have at least decent athleticism. Here's a list of Miami's all-time career tackle leaders. If you're over 30 years of age, you'll recognize more than a few of these names:

A look at some of Quarterman's 2019 highlights:

The Eagles already have their share of linebackers who are more cover guys than they are enforcers, and Quarterman could bring a "2017 version of Nigel Bradham" type of energy to the defense.

Nelson is something of a linebacker/safety hybrid, though less in the mold of guys like Kamu Grugier-Hill and Nate Gerry, who are more cover-oriented, and more in the mold of present-day Andrew Sendejo, in that he runs around and hits people.

In 2019, Nelson racked up an absurd 12.5 (!) sacks from his safety/linebacker (more linebacker than safety) spot. Obviously, he is an accomplished blitzer.

For some reason, I couldn't find Nelson anywhere on anyone's big boards. I had to go back and make sure he declared for the draft. Anyway, as a UDFA who can play special teams and maybe contribute in some sub-packages, yes please, I'll take this guy in my camp.