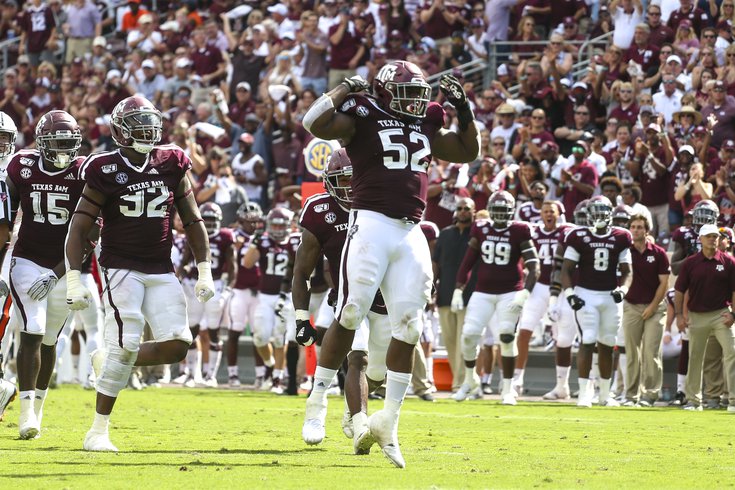 The Eagles had a pre-draft visit scheduled with Texas A&M DT Justin Madubuike before the COVID-19 pandemic shut down NFL facilities.

The Eagles have boatloads of financial resources allocated to the defensive tackle spot, with three highly-paid players in Fletcher Cox, Malik Jackson, and Javon Hargrave. Per OverTheCap.com, they are all among the top 10 highest paid 4-3 defensive tackles in the NFL on an average per year basis:

The Eagles also don't lack for bodies overall, as they retained Hassan Ridgeway this offseason, and have Bruce Hector, Anthony Rush, and Albert Huggins on the roster as well. The Eagles are ready for training camp at DT, right now.

• Relative to the rest of the roster? No.

Meanwhile, Jackson is already 30, and he's returning from a serious foot injury that required surgery. Not to mention, the Eagles appeared to be stacked a year ago at DT, until they weren't.

Defensive tackle is not an immediate need, but it wouldn't be shocking to see the Eagles take one in the the 2020 NFL Draft.

Some defensive tackles who make sense for the Eagles

Madubuike reportedly had a pre-draft visit scheduled with the Eagles before the COVID-19 pandemic shut facilities down league-wide, though it's unclear if that was before or after they signed Hargrave. Still, he's an obvious fit for the Eagles' defense, and even in the second round, it wouldn't be entirely shocking for the Eagles to still have interest.

Strowbridge is listed at either DE or DT, depending on where you look, but we'll put him here. He has inside-outside versatility, and could fill a role similar to that of Michael Bennett in 2018.

As you should expect at 275 pounds, he has good quickness relative to other defensive tackles.

I think he goes Round 3, but would be good value as a rotational DE/DT in the Eagles' scheme in Round 4.

In his second season as a full-time starter, Murchison had 7 sacks and 12 tackles for loss. Though maybe a touch undersized, he is a penetrating one-gap defensive lineman with an assortment of pass rush moves, and non-stop energy.

Davis is short and he has small arms, which is why he'll drop to Day 3 of the draft, but he is also very strong and very fast:

Here he is running his 40 with his twin brother. It's kind of incredible that a 300-plus pound guy can move this fast:

Davis is also productive, as he had 8 sacks in 2019, and as noted in our defensive end preview, the Eagles believe that college players who get sacks become NFL players who get sacks. He is probably too small to be a three-down player, but I like him as a rotational defensive tackle who can give opposing offensive linemen something of change of pace to have to deal with.

Lynch has played inside and outside in an even-man front, and at DE in an odd-man front in Baylor's defense, and he produced wherever they put him. In his three season at Baylor, Lynch had 20 career sacks, including 13.5 in 2019.

I would view him as a similar fit in the Eagles' defense as Strowbridge above, in that he gives you inside-outside versatility off the bench.

Projected round: 6, if his old college coach, Matt Rhule, doesn't over-draft him.