Live NFL Draft rumors: Is a blockbuster Eagles trade up to No. 11 brewing? 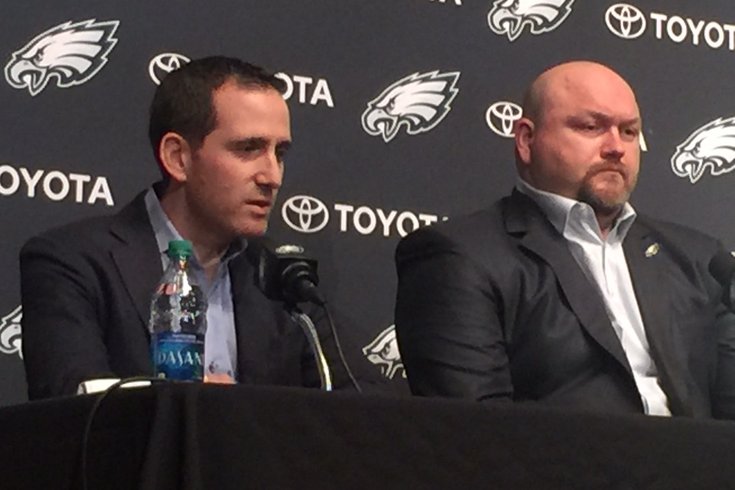 UPDATE [4:45 p.m.] — We updated this post not long ago, musing on the possibility that the Eagles could send either Andre Dillard or Rasul Douglas to the Jets as part of a package to move up to pick No. 11. Now, we might have a little nugget of information on who, exactly, they would be willing to make that move for:

CeeDee Lamb also told me he spoke to the #Eagles WRs coach.
"Spent a lot of time talking to the Eagles for sure, but as far as other teams, I don’t think they want to show their hands...to show off like if they're interested. They are going to wait until the real thing happens."

Ceedee Lamb, of course, is one of the top three receivers getting a lot of attention from a lot of teams as the draft fast approaches. Most mock drafts project a wide receiver going to the Eagles at No. 21 overall. Some mocks have at least one wideout going in the top 10, but many have all three of those top-tier wideouts — Jerry Jeudy and Henry Ruggs III are the others — still available at No. 11.

UPDATE [3 p.m.] — Can Eagles' Howie Roseman use his close relationship with new Jets GM Joe Douglas to his advantage tonight?

According to ESPN's Rich Cimini, there could be an opportunity the Birds to move into the No. 11 spot with a blockbuster draft day trade. According to the NFL expert, the Jets are focused on getting an offensive lineman with their top pick. If one of the top four OL is not on the board when the Jets are on the clock, they are interested in moving back.

"Unconfirmed rumor about the Jets swapping picks with Philly (21) and acquiring CB Rasul Douglas + pick. Douglas is a borderline starter, but he was drafted by Joe Douglas." [ESPN]

That trade could theoretically get the Eagles in position to take any of the top three wideouts — CeeDee Lamb, Jerry Jeudy or Henry Ruggs III, as the receiving-needing teams draft in the teens, before the Eagles are slated to at No 21.

Philly has added some CB depth, making Rasul Douglas expendable. And with him still being young and cheaply under team control, he's a valuable piece for a team needing cornerback help like New York.

There's also another route the Eagles could go in trying to pry that 11th pick away from the Jets: trading last year's first-round pick Andre Dillard. He was mentioned in Trent Williams rumors early Thursday morning, but by the afternoon, there was some smoke building over him being a possible fit in New York.

And when reporting about that Williams-Dillard rumor, our own Jimmy Kempski offered up some analysis on how the team view Dillard, pointing out that the Eagles might not be as high on him as some think, especially after they traded up to get him just one year ago.

According to Kempski's sources, Dillard's "emotional episode during training camp wasn't the only such incident that occurred during the course of the 2019 season." He also added that moving Dillard might make sense for the Eagles, but it would make even more sense if they included him in a deal that would allow the Birds to move up in the first round to address an even bigger need: wide receiver.

There is no doubt the rumor mill will keep churning, so stay tuned...

The Eagles have some glaring needs that will be addressed in the upcoming NFL Draft this weekend, but the team has connections to several available free agents that may loosen them up from having to take players based strictly on positions of need.

Take running back, for instance. The Eagles enter the draft with just three on the roster: Miles Sanders, Boston Scott and Elijah Holyfield. Clearly they'll need more than that to field both a training camp roster, and a 53-man roster (which often includes four or five RB on game day). Instead of potentially reaching for one, the Eagles have a variety of free agent options, ranging from Devonta Freeman to LeSean McCoy.

They also have a former Super Bowl hero who knows the offense pretty darn well already.

“it definitely hurt, it’s almost like separating from a family member... those guys are championship caliber family to me”#Eagles pic.twitter.com/9vgm2zfKco

Clement has battled injuries of late, but his familiarity with the Eagles as an organization could make him a valuable addition, especially with training camp in doubt due to the current pandemic. It isn't a stretch to think they'll bring Clement back this summer.

Another former Eagles hero at a position of need is also available in Jason Peters.

With rumors swirling today about Trent Williams reportedly being connected to the Eagles, the obvious conversation is around whether Peters' heir apparent is good enough to start at left tackle for the foreseeable future. If he is indeed not commanding the team's respect and comfort, Andre Dillard might be traded this weekend while his value is still high. Would the team really want to deal with Williams and his high salary demands?

The team has shown it prefers making moves on the margins to big blockbuster deals. Perhaps bringing back Peters for one more year is the way to go. Here's a bit of analysis from Jimmy Kempski on the topic:

If the Eagles had concerns about Dillard's mentality to play in a city like Philadelphia, it would perhaps make sense to move him sooner than later to salvage value he may still have around the league, before it's too late. Perhaps a package of Dillard and a pick would allow the team to move up for a player at a huge need, like, oh, sayyyy, wide receiver?

Should the Eagles be willing to deal Dillard, the common sense replacement would be Jason Peters, who is still available on the open market. Williams, who is six and a half years younger, also would make sense in this scenario. [Jimmy Kempski]

It will be interesting to see how things shake out with so many scenarios realistically in play for the Eagles. As the draft approaches Thursday, follow along with our live stream and open thread leading up to the 8 p.m. first round on ESPN and NFL Network: