What they're saying: Was Darius Slay trade the solution to Eagles secondary woes? 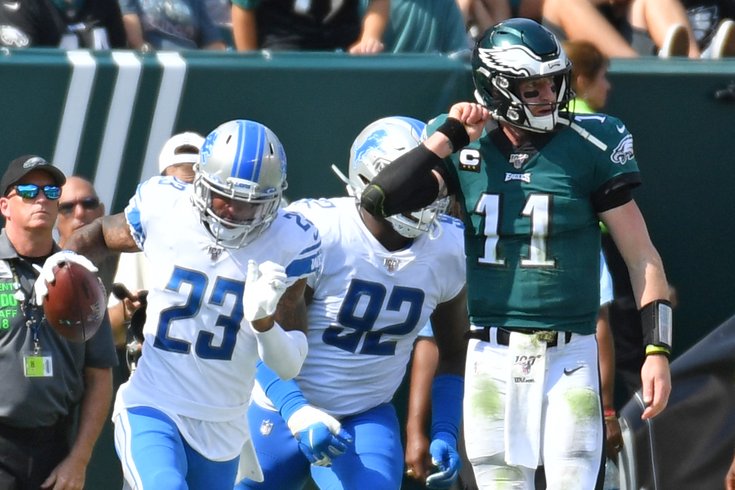 The Eagles deliberately navigated free agency this week as they worked to rebuild the secondary that failed them so frequently last season, and it has been quite an interesting ledger of activity.

The team cut ties with longtime defensive captain Malcolm Jenkins, announced they were moving Jalen Mills to safety and re-signed safety Rodney McLeod. They resisted the urge to sign the top cornerback available in free agency in Byron Jones and held off on Chris Harris.

Finally yesterday, they made a trade, sending a third- and fifth-round pick to the Lions for Pro Bowl cornerback Darius Slay. Was this the appropriate and necessary move to fix the secondary?

The response to the trade has been generally positive, but there is some nuance in the decisions the Eagles have made over the last few days.

How do the so called experts across the NFL media landscape rate the move? That's the subject of our latest "what they're saying":

Let's begin with, well, a cautionary tale. We will preface the snippet below by saying that Barnwell gave the Eagles a B for this move, and the Lions a C for the picks they got back. According to the ESPN scribe, there are similarities to one of the most disappointing offseason moves made by the Eagles in recent history, but that doesn't mean it'll end the same:

While most Eagles fans are thrilled about adding a top-level cornerback after years of trying to get by with the likes of Ronald Darby and Sidney Jones in meaningful roles, there are likely a few who remember the disastrous Asomugha signing and worry that this could be a repeat. He had been brilliant during his time with the Raiders and shut down his side of the field to a virtually unprecedented extent, but after signing with the Eagles before his age-30 season, the three-time Pro Bowler seemed to lose it overnight. He lasted two years with the Eagles before being cut, and he was out of football a year later.

I wouldn't be as concerned that Slay will disappoint in Philadelphia. Asomugha was a great player, but the Eagles also took him out of the role he played in Oakland for stretches during his first year in Philadelphia, and he never seemed to get his confidence back. Slay hasn't been as dominant as the former Raiders cornerback, but he's more versatile and certainly more comfortable moving around the formation to take No. 1 wideouts. [ESPN]

How about a perfect 4.0? That's the grade NBCSP's Kulp gave the trade (an A). While he recognizes some of the possible downsides, his optimistic spin has to give Eagles fans a lot to be excited about:

For what it's worth, Slay is coming off a bit of a down year, accolades aside. According to Pro Football Focus, he ranked 83rd among all corners. There has to be at least some mild concern that it's a sign of decline.

The Lions were horrible though. The offense was bad. The defense was worse, with no pass rush to speak of and little help in the secondary, especially after Quandre Diggs to Seattle. Slay also suffered a hamstring injury that caused him to miss two games and likely affected his play long after, too.

Put a healthy Slay in the Eagles defense with a strong pass rush, and a Carson Wentz-led offense that will put up points rather than steady barrages of three-and-out, and he should bounce back.

There's nothing to not like about this trade. The picks aren't a big deal. The contract is friendlier than the one Jones got. And, simply put, Slay is the better player.

This is a massive upgrade for the Eagles' secondary -- a caliber cornerback the Eagles haven't had since Asante Samuel -- making the loss of Malcolm Jenkins a lot easier to swallow. [NBCSP]

Eagles fans, in assessing the success of their team in acquiring Slay, must also take into account the monster three-year extension he netted. It was a very big investment, one that included a pair of mid-round draft picks and a $50 million contract. Over at Inquirer.com, Domo seems to believe it was a very smart group of transactions:

The money they saved by not overpaying Jones and negotiating a three-year, $50 million team-friendly contract extension with Slay allowed them to also add free agent defensive tackle Javon Hargrave. That probably wouldn’t have happened if they had corralled Jones, whose five-year, $82.5 million deal with the Dolphins includes $57 million in guaranteed money.

Slay’s extension, which includes $30 million in guarantees, doesn’t kick in until next season. He’ll make $10 million in 2020 on the final year of his previous contract.

Slay has 104 pass defenses in seven NFL seasons, which is the most in the league over that time. But he is 29 and not coming off one of his better seasons.

With Slay slowed by a hamstring injury a good chunk of the season, opposing quarterbacks completed 58.3% of their passes thrown in his direction, which was the highest percentage against him since 2016. He gave up 14.1 yards per catch, the highest average since his rookie year. [Inquirer.com]

The Eagles may be getting a talented cornerback, but they could be getting a little drama too. There is a lot to recap, but as many fans know Slay more or less demanded a trade before the Eagles acquired him. He was called a locker room cancer by the Lions and Slay tried to explain some of his prior issues. Here's a little bit of what happened from Kaye at NJ.com:

The cornerback said he felt like there was a lack of mutual respect between the player and the coach. He placed this belief on a 2018 incident in the team film room during Patricia’s first training camp in Detroit. :

“He told me in front of the whole team, in the team meeting room, showed clips of me in practice getting a ball caught on me or so in practice,” Slay said. “I posted a picture (of a wide receiver on social media), and he told me, stop sucking this man’s private. So I’m like, ‘Whoa.’ I’m like, ‘Hold up.’ Where I’m from, that don’t fly.” :

The film-room diss lingered in Slay’s mind throughout the remainder of his time in Detroit. The rocky relationship became a bit more cordial in time but Slay never forgot about Patricia’s crass words.

“Your first impression always your best impression,” Slay said. “Like I said, I would never disrespect him in that way. And for him to be able to tell me I’m out here sucking another man’s crank because of a picture I post, I ain’t like that. And it took me a whole nother level.” [NJ.com]

Let's start by giving credit where credit is due: The Athletic nailed the ratings. They didn't use the typical scale, from A-F, but instead embraced our troubled times by giving the Slay trade a rating comparing each move "on a scale of food currently in your house." I was planning on including some of the actual football analysis provided by the talented trio of NFL writers, but was too taken in by their final ratings — so those are what I've included below:

Sheil Kapadia: "Leftover enchiladas. It’s lunchtime, you haven’t eaten all day, and you spot them in the back of the fridge. They’re from a few days ago so you’re not 100 percent sure that they’re still good. You told yourself you were going to eat something healthy, but you can’t resist. You heat them up, feast and get instant gratification. But as you digest them, you don’t feel so great, and eventually, you wonder what you were thinking. The worst part of all: You’ve been making the same mistake for years and never seem to learn from it."

Zach Berman: "Fresh fruit. It’s a high-quality product until it starts to spoil, so you need to get use out of it now. It can be expensive and the best ones are hard to find, but you know it’s good for you and appreciate it when you have it. However, if you need to throw it away early and don’t get good use out of it, you’ll rue the idea and wonder if you should’ve just gotten by with something else."

Bo Wulf: "Last night, I planned on making something healthy from scratch, but after a long day, I was too hungry and tired to put the time in so I grabbed my son’s leftover beans, put them on a tortilla with cheese and made a quick quesadilla. I might just keep doing it night after night if no one’s gonna call me on it." [The Athletic]

I'll leave it to you to interpret that penetrating analysis.