Report: Sixers assistant Ime Udoka could emerge as candidate for job with Bulls 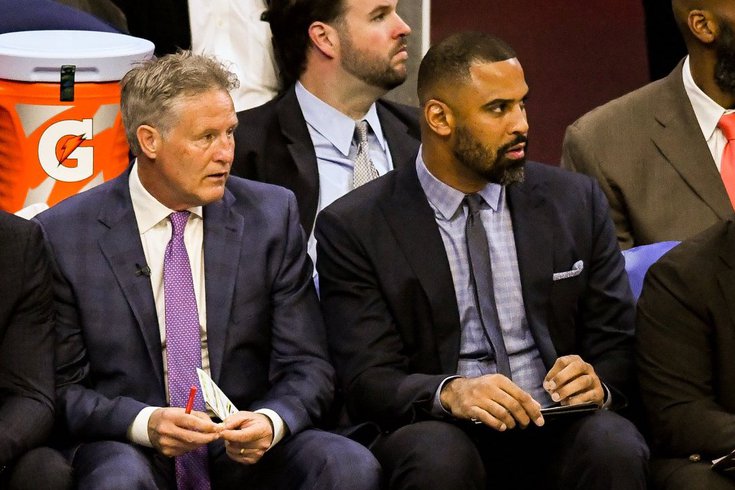 Most teams across the NBA are waiting around to find out whether the 2019-20 NBA season will resume again, but the Chicago Bulls are a rare exception. They are in the midst of totally revamping their basketball operations department, and after hiring Sixers front office man Marc Eversley as their new GM, it sounds like more moves could be on the horizon.

Darnell Mayberry, who covers the Bulls for The Athletic, had an article on Wednesday speculating about head coach Jim Boylen's future with Chicago after the franchise-shifting moves at the top. "Multiple rival executives" believe the beleaguered Bulls coach will be shown the door by a new regime led by Arturas Karnisovas, and Sixers assistant coach Ime Udoka appears to be one of the potential candidates should that job open up:

So who could the next coach be? Two current assistant coaches are standing out as increasingly possible Boylen replacements whenever the job may open: Toronto’s Adrian Griffin and Philadelphia’s Ime Udoka. Both have ties to the new front-office regime. Both have long been mentioned in coaching circles as lead-man material. And on multiple levels, both fit the mold the Bulls previously have pursued.

Udoka, meanwhile, is a name one league source said the Bulls are likely to take a look at after picking up Eversley, who worked with Udoka this season with the Sixers. [The Athletic]

While keeping in mind this is a report based on a hypothetical (if realistic) scenario where Boylen loses his job, it would not be a surprise to see Udoka get his first crack as a head coach next season, whenever that is. Well-regarded in coaching circles prior to arriving in Philadelphia, the Sixers made him one of the league's highest-paid assistants, plucking him away from Gregg Popovich's staff in San Antonio last June to offer his services behind Brett Brown.

For those who aren't familiar with how Brown sets up his staff, he believes in doling out specialized responsibilities in a manner similar to NFL staffs. Udoka was tasked with being the team's "defensive coordinator" this season, and you could often see him barking instructions from the sideline on big defensive possessions and pulling guys aside for last-minute instructions. And some of his instructions were just about basic fundamentals, like making sure defenders were showing their hands while fighting through screens.

While the Sixers were not the world-beating unit many thought they could be this season — Udoka himself said their roster was like "being in a candy store" as a defensive coordinator before the season — defense was certainly the strength of the team. If the season were canceled tomorrow, they would finish sixth in defensive efficiency, and that was the only part of the game where they were able to consistently take advantage of their personnel.

It is not an easy team to build structure for, by the way. Joel Embiid's singular gifts as a rim protector drive the team's base scheme and principles, but Al Horford proved to be a wonky fit in that same centerfield coverage, which forced the Sixers to toggle different looks on and off to try to get by when the franchise player was out of the lineup. Philly also experimented with coverages throughout the season, from full-court trapping to a 1-3-1 zone, working on concepts they hoped to eventually use in a playoff series.

Udoka has credentials as a former player, is young enough (42) to connect with players in a way some coaches can't, and seems as though he will inevitably get his shot somewhere. Here's the more interesting question than whether or not it will be Chicago — how soon is too soon for the Sixers to contemplate their own structural changes in the front office and coaching staff?

Teams that are holding out hope to do damage in the playoffs are actually at a disadvantage in the current situation. Teams rebuilding or otherwise irrelevant can get an even bigger jump than normal on infrastructure changes, potentially snagging the best candidates on the market before other teams even begin to search.

Admittedly, the Bulls are looking for different sorts of people than the Sixers might. They need a leader to simply get them out of stage one, rather than an endgame, championship-level coach. But those people can come from anywhere, in theory. Phil Jackson was coaching in Puerto Rico and the CBA before being groomed as a Chicago assistant to take over Jordan's Bull. Nick Nurse was coaching in England and in the G-League before making his way to Dwane Casey's staff in Toronto, and he has emerged as one of the best coaches in the league and was a championship winner in Year 1 at the helm.

If the Sixers believe Udoka has those type of chops — and they would know better than anyone outside of San Antonio — it stands to reason they should be doing what they can to protect against this type of scenario. For that matter, they should be having high-level discussions about everyone's future, starting from the top all the way down to the roster on the floor.

All of this is still a bit premature, but the Sixers have more than enough information through April 2020 to know what their big-picture plans are and who they see as essential. The longer they wait, the less control they have over their fate.