What they're saying: What's the latest on when the NBA, NHL, NFL and MLB will return? 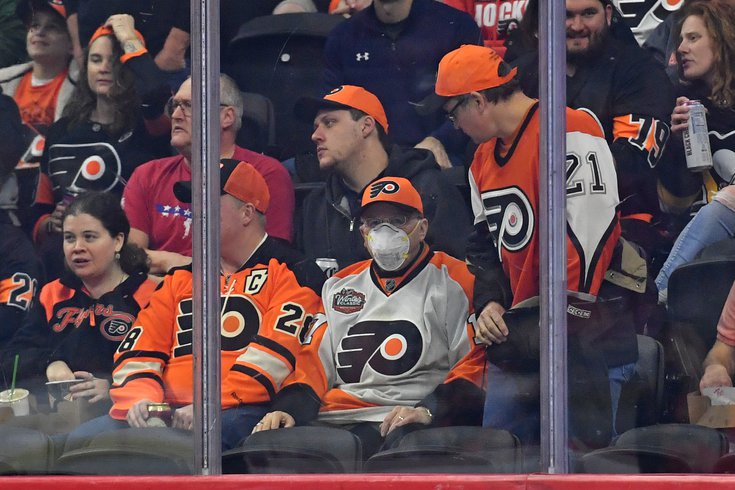 How many more games in front of fans will the Flyers and Sixers play this season?

It's been almost two full months since we last had a live sport to watch. And it seems like every day, we are no closer to having something actually return.

The world is still a strange place, and the slowness of mass testing becoming available still remains the biggest hurdle for a league to make its return. A recent report said that the NBA, for example, would need 15,000 COVID-19 tests — a number that as of right now would certainly be detrimental to the healthcare system.

It's really weird to have the fate of sports tied to health, politics and to all of these factors that make it completely impossible to gauge when we'll be able to have sports to follow and watch again.

The PGA Tour is slated to be the first sport to officially return, as its June 8th date remains on the books with no fans allowed at Colonial Country Club in Fort Worth Texas. Which American league will be next?

We decided to try and find as much information as we could on the rapidly changing landscape. Here's the latest on each major sport's league and what they're saying about when/in a return may occur:

The NFL, a week from now, will be revealing its 256 game schedule for the 2020 NFL season, starting on September 10, as planned. The league, according to many experts' sources, not only expects to play a full schedule of 16 games (though they appear to be willing to start up to three weeks later with a February 28 Super Bowl), they also seem to think that by September, testing will be so widespread and simple (a finger prick or saliva swab), that fans can attend en mass. Here's more on what sounds like a pipe dream:

The official position of the league and the teams surely will be that anyone who chooses to attend a game will be doing so with full knowledge and awareness of the risks, and the lawyers undoubtedly will ensure that anyone buying a ticket expressly assumes the risk of catching the virus by choosing to show up for the game.

Don’t count on a “checkerboard” seating arrangement, either. Social distancing in football stadiums won’t work. Even if fans are kept physically distant in their seats, it will be impossible to keep them at least six feet apart when entering, exiting, going to the bathroom, getting food and drink, etc. The league currently is confident that, by the time football season rolls around, the situation will have progressed to a point that people will be able to make informed decisions about whether they want to attend games. (Obviously, those with the antibody will have the lowest risk, since they will have already had the virus.)

This doesn’t mean that training camps will open in late July/early August or that the regular season will start on Thursday, September 10, with the Chiefs raising a banner and hosting a team like the Patriots. In order to get to the point where the governors of all states with NFL stadiums will agree to opening the doors and letting anyone who chooses to attend show up, the start of the season may have to be delayed by a few weeks. [Pro Football Talk]

The NBA still has a relatively large portion of its season to finish, as well as the entire postseason. Whether the season will reconvene is still up in the air, but it really seems — at this point — more manageable for the league to bring 16 teams back instead of 30. Why? Well, each team has 15 players, and then coaches, assistants, front office staff, training staffs and so on. Add in referees, scoreboard operators, camera operator and support staff and you have a very large group of people.

An NBA team, according to ESPN, routinely travels with 40 personnel to every game, and up to 75 during the playoffs. Which makes a lot of people who would theoretically need to be quarantined together in a "bio sports" scenario in Disney World or in Las Vegas. But it seems like the quarantine idea has become "untenable." Which is why the league plans to wait for "certainty." Here's more:

When play abruptly stopped on March 11, there were 259 regular-season games remaining on the schedule. If the NBA were to complete those games and four rounds of playoffs, occupants could be in some form of a bubble for roughly three months.

Epidemiologists and infectious disease experts described the need "to create layers of protection" when returning to play. This would mean cutting the number of people to a minimum to reduce the possibility of infection and spread of the virus backed up with other measures like daily temperature checks. As a result, these experts recommend isolating participants from friends and family during this time.

This was ultimately an untenable concession. As the league evaluates options, sources said it has rejected the concept of quarantining players without family members. The hope is that advancements in testing could prevent such isolation measures. [ESPN]

The NHL has suspended its full operations until at least May 15, though there is now buzz that the league has some semblance of plan to return to the ice. Instead of having teams return home to finish the rest of the schedule in a normal fashion, the NHL looks like it is going to be scrapping the regular season in favor of a larger postseason structure. It also is exploring having four arenas host the postseason games and it is considering different options for which cities will be most suited for this task. Here's a bit more color on the NHL's latest and simplest plan:

We are told that the league has yet to settle on whether to resume/complete the regular season or whether to move directly to an expanded 24-team playoff format following perhaps a couple of exhibition games per club.

Teams have been pressing to complete the regular season in order to satisfy their local television commitments but another look is being taken at the wisdom of bringing clubs back to play out the schedule when they have no realistic chance of making the playoffs.

A proposed playoff plan has reportedly been floated under which the top six teams in each division — rather than the top 12 teams in each conference — would gain entry to the tournament. [NY Post]

Baseball was playing spring training games when it decided to postpone its 2020 season. Since then, there have been several ideas on how to put all 30 teams in one state (like Arizona or Florida) while realigning divisions. They also have explored creating geographic divisions that ignore AL/NL designations to allow teams to play in their home stadiums and travel less frequently. Like the other major sports, nothing is really gaining traction and the league is trying to get all the information it can before it decides what to do. Just as in the NBA, there are several outcries against the league quarantining players away from family members for what could be multiple months of baseball.

Multiple sources speculated this week that MLB likely will bide its time in formulating a return plan while paying rapt attention to the results of several states’ easing of stay-at-home restrictions. Perhaps, too, advances will be made in a nationwide testing program. If there’s greater access to reliable tests in May and June than there was in April, sports will have an easier time coming back.

Waiting also would allow MLB to buy time in talks with the Players’ Association about agreeing to a decrease in wages in the almost certain event that games resume without fans. Those conversations with the union have not yet begun.

They will eventually, especially with commissioner Rob Manfred indicating recently that teams would lose at least 40% of their revenues by not being able to sell tickets, operate luxury suites, and charge fans for concessions and parking.

Many players, notably Mike Trout and Clayton Kershaw, expressed concern over the Arizona plan because it would force them to be separated from their families for several months. But MLB might be limited in where it can return if the Centers for Disease Control and Prevention don’t allow for gatherings of 50 or more people -- even without fans -- in every major-league city. [Inquirer.com]