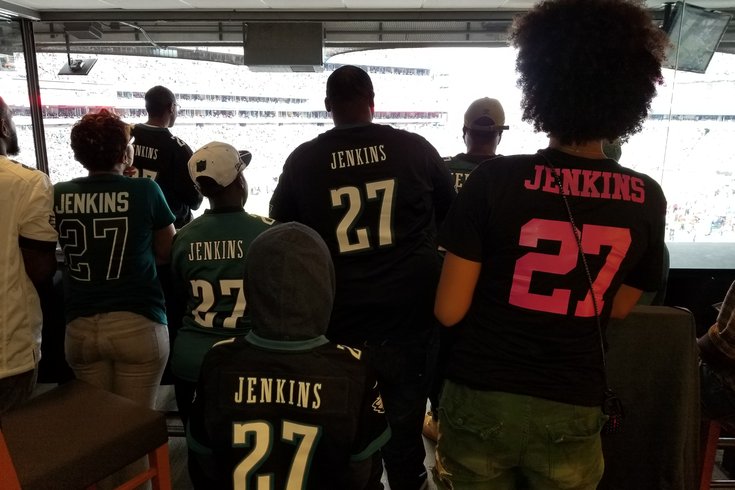 There's no doubt about the rooting interests of club box suite 38 at Lincoln Financial Field.

Malcolm Jenkins is more than No. 27 in midnight green, team leader of the Eagles to the group in club box suite 38 diagonal to the north end zone of Lincoln Financial Field. To them, the Eagles’ Pro Bowl safety is a son, a brother, a husband, a father, a nephew and an uncle. To them, he’s someone beyond the football field, someone they love, someone they cherish, someone they know risks more than playing football each time he steps out on the field.

Jenkins is someone they watch intently every Sunday, eight times a year during the fall at Lincoln Financial Field, and eight times on the road. Their eyes hardly leave where No. 27 is on the field — and it’s pretty much the same way with every NFL family that watches from the stands, from the suites, anywhere.

They’re not down on the field, but the family and friends of NFL players live every down with them. And No. 27 wouldn’t be on an NFL field without the sacrifice and commitment of the many who were in the suite.

This Sunday is no different.

Lee and Gwendolyn, Malcolm’s parents, his wife, Morrisa, and his daughter, his younger brother, Martin, his Aunt Tammy, friends and members of The Malcolm Jenkins Foundation fill the club box.

Perhaps no one is as nervous or edgy as Lee. He paces the suite an hour before the game, he never sits, and will occasionally play with his granddaughter. But Lee misses nothing. He looks at the game like a coach. He breaks down defenses, he predicted the Eagles’ first touchdown against the visiting Arizona Cardinals before it was scored.

He notices defenses, the Eagles umbrella on third downs, dropping six back at the first-down marker in the first quarter. Even though the Eagles bolted to a 21-0 lead, Lee is unrelenting.

Once the game begins, there’s silence, other than the fan noise that wafts through the open area of the suite.

“I’m a little used to this now, much more so than I was in the past when Malcolm started his career in New Orleans,” said Morrisa, who’s been married to Malcolm for six years and is expecting the couple’s second child in January. “But in the first two or three years, my anxiety was so bad that I couldn’t talk to anyone leading up to the game on Sunday.

"There is no way I would let Malcolm know how nervous I get. We have a routine when they come out — he runs to the far end zone, kneels and prays. I usually say a prayer for him, too.”

“It was so bad that you would have thought I was going to get out there and play myself. It is better as the years have gone by. I still sit in the same corner seat every Sunday. I have to keep up with my rituals. I used to be twitchy. People would see me and knew, ‘Leave Mo alone, this is her routine.’ I was all over the place. I’ve become a pro at it by now. But there is no way I would let Malcolm know how nervous I get. We have a routine when they come out — he runs to the far end zone, kneels and prays. I usually say a prayer for him, too.”

Morrisa won’t relax until she speaks to Malcolm after the game.

“Malcolm prepares and I knew when I first met him that football is part of the deal and I deal with it,” Morrisa said. “Malcolm prepares. From the first quarter to the fourth quarter, we’re locked in. After the game, we de-escalate.” 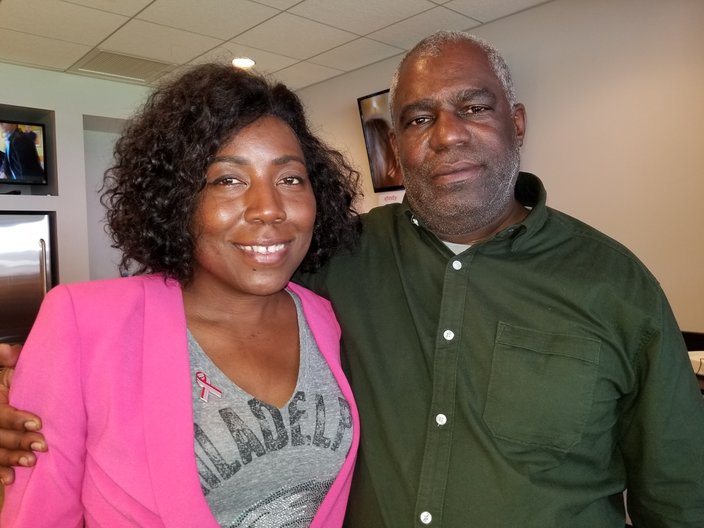 Lee is the same way.

“For me, my concern is how prepared Malcolm is and all I do is pace back and forth,” Lee said. “Malcolm is always ready, but that’s always why you’re concerned. Because you can always be more prepared. I think we’re all more nervous that Malcolm is before games. I see him doing his homework in his man cave before games, and I leave out of there because once he gets into that mode, he’s locked in and no one is there.

“I’ll continue to pace and everyone gets on me – I try not to critique, but that’s my son. I critique all of my sons. You have to watch though. I remember watching one game when Mark Sanchez was with the Eagles and we were out in the stands. When things went south, the fans started on Mark Sanchez. Mark’s mother had to leave and that was tough to watch. You’re the family of an NFL player and some of that stuff out there is hard to hear. It’s why we’re here.”

Here is a cushy place that’s a far, far trip from sitting in the metal stands in the heat and cold at Piscataway High School, where Malcolm played. Lee and Gwendolyn hardly ever missed a game.

“As a parent, you can’t worry, you have to try and sit back and enjoy the game. Our family has been doing this for a long time, so we’re used to it."

“My son is a great man,” Lee said. “That’s what makes me proud. There is a lot going on in an NFL player’s life, a lot to balance. Unfortunately, my father, Gwen’s father and Malcolm’s uncle never got a chance to be around this and see Malcolm play a game in the NFL. My father never saw Malcolm play at Ohio State. Malcolm’s grandfather went to see Malcolm play in an off-shore hurricane in one of his Pop Warner games. I just miss the fact that they couldn’t be here for things like this.”

Gwendolyn is the calming influence. She is far more relaxed than nearly everyone. Before the game, the talk in the suite is rarely about football. It’s about real life things. Job changes. Moves. But things change quickly when the Eagles came out of the tunnel and they spot No. 27. They cheer when any of the Eagles make a play. They yell when something doesn’t go right.

This Sunday, fortunately, almost everything the Eagles did was right in their 34-7 victory.

“As a parent, you can’t worry, you have to try and sit back and enjoy the game,” Gwendolyn says. “Our family has been doing this for a long time, so we’re used to it, from Malcolm’s Pop Warner days to his high school days, to Ohio State, to now with the Eagles. You’ll notice no one says anything during the game.”

The suite is then pierced with the PA announcer, “Tackle by No. 27 Malcolm Jenkins.”

And once again, the suite explodes in applause.