There's hope for David Cross and 'Arrested Development,' and here's why 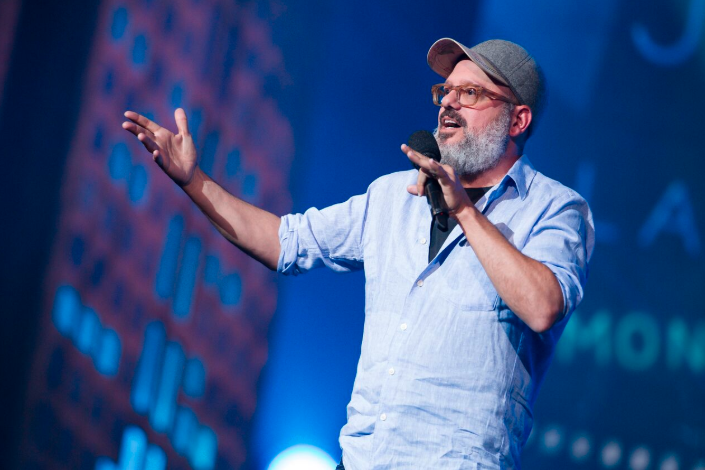 Courtesy Just for Laughs /for PhillyVoice

“I’m very new to [fatherhood], so I have some observations and jokes about that, but hopefully nothing too pedestrian. Hopefully, they’re funny whether you have a kid or not.”

David Cross may be best known for his role as Tobias Funke, the eccentric, possibly homosexual “never-nude” on “Arrested Development,” which returns on Netflix tonight for the first part of its fifth season.

And while you may also know him from his work on the seminal 1990s sketch comedy series, "Mr. Show," Cross began his career more than 30 years ago as a stand-up comedian, and continues to perform on stage regularly. His stand-up career continues with “Oh, Come On,” a summer-long tour that reaches Philadelphia at The Fillmore on June 23.

PhillyVoice recently spoke to Cross about the stand-up tour, what to expect from it, "Arrested Development," how fatherhood has changed his comedic sensibility and various mayhem he’s gotten into in past visits to Philly.

Why is the show called “Oh, Come On?”

“It will be revealed during the set,” Cross said.

“It’s a reference to something. The audience gave me the name.”

Cross said he’d been doing informal sets in smaller rooms to get ready for the tour, and when he suggested another name he had been considering, “the audience booed vociferously.”

He said the show will follow the pattern of his most recent comedy specials – it will deal about one-third with “dumb stuff,” a third anecdotal, and the remaining “topical/religious type stuff.”

“I’ll definitely talk about Trump,” he said, “but not too much.”

While his most recent tours have kept the political stuff to about a third, “some people think [I] just went up there and ranted about Trump for an hour.”

One topic Cross won’t be addressing is guns. His most recent set, which led to the 2016 Netflix special “Making America Great Again,” included a memorable riff about guns, but he’s not going to revisit that.

“I pretty much feel I said what there is to say on that,” Cross said.

“I haven’t come up with anything that advances that idea.”

One major thing has changed since the last special: Cross became a first-time father to a daughter at age 52, along with his wife, actress Amber Tamblyn. And while he was clear that the standup bit “won’t be an hour of dad jokes,” Cross will indeed address fatherhood on stage.

“I’m not going to belabor it – it’s been my world for the last year,” he’s said.

“I’m very new to it, so I have some observations and jokes about that, but hopefully nothing too pedestrian. Hopefully, they’re funny whether you have a kid or not.”

As for "Arrested Development," Cross couldn’t comment much on plot details, except to promise “more crazy antics,” and that the series is “much closer to the original three seasons” than it is the fourth, which debuted on Netflix five years ago.

“It’s more like making a movie than it was a TV show, but having said that, it’s much closer to the first three seasons than season four. They kind of went back to that,” he said.

Cross added that he’s fairly certain that the new season marks the end of the line for the show.

[Note: Cross made headlines last week, in a not-so-positive way, when The New York Times interviewed the cast of "Arrested Development." In the interview, Jessica Walter called out Jeffrey Tambor for his abusive on-set behavior, and the men in the cast, including Cross, appeared to give Tambor a pass. PhillyVoice’s interview with Cross took place before this happened.]

I have been off Twitter at the behest of my wife. I have apologized to Jessica in private (the way I prefer to conduct apologies to people). I do not have a PR firm repping me. I hope this interview I did earlier is edifying on at least a tiny level. https://t.co/gXVgmJkdfj

Cross also weighed in on the chronological version of Season 4 that was released earlier this month.

“My wife and I watched the first four episodes. She liked it; I was kind of ambivalent about it,” Cross said.

“I definitely think it makes things clearer, but I did not enjoy it as much as I enjoyed the original incarnation of season 4.”

Cross appeared in the Philadelphia-set episode of "Drunk History" in 2014, where he played Baron von Steuben. And while that episode wasn’t actually filmed in town, Cross has made some drunk history of his own on past trips to the City of Brotherly Love.

He remembers visiting Philly during a past tour and, on a trip to 9th Street and Passyunk Avenue, "getting f***king hammered and almost getting in a fight with a cop."

Another proud moment from Cross came during an early-2000s tour with his old "Mr. Show" partner, Bob Odenkirk, when the tour booked the Electric Factory for the Philly stop. They had been adamant that the tour include no TicketMaster/LiveNation venues, but upon discovering that they were performing in just such a venue, the two decided to spend a large chunk of the show bashing the company, which upset the promoter.

"It happens every couple of years – someone will get upset with you for saying something mean,” he said.

“Always a good time there,” Cross said of Philadelphia.

Fore more information on Cross' performance at The Fillmore on June 23, click here.