Vito Perillo, a WWII veteran, has earned a second term in Tinton Falls 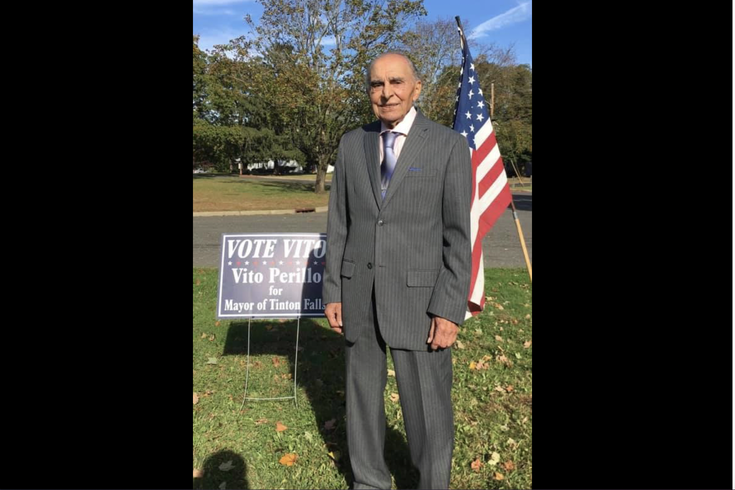 Vito Perillo, 97, will get another four years as mayor of Tinton Falls in Monmouth County, New Jersey. The World War II veteran was re-elected on Tuesday and is believed to be the oldest mayor in the United States.

Vito Perillo, the 97-year-old mayor of Tinton Falls, has won re-election in North Jersey and will eclipse the century mark before completing his second term in the Monmouth County borough.

The World War II veteran and former electrical engineer with the U.S. Department of Defense, defeated three other challengers in a nonpartisan election on Tuesday.

Perillo earned 2,209 votes to defeat his closest competitor, retired school teacher Ellen Goldberg, according to unofficial results from the Monmouth County Board of Elections. The borough's population is about 18,000.

Believed to be the oldest mayor in the United States, he thanked his supporters in a statement on Facebook.

Thank you to my fellow residents for trusting me to lead Tinton Falls forward for the next four years. You may know that...

"You may know that I am not a politician, but today I stopped to think about why people might vote for me," Perillo wrote. "Maybe it’s because I’m a WWII veteran, or an 'old guy' (hopefully not), or maybe it’s because you read my flyer highlighting our accomplishments over the last 4 years. My hope, however, is that it’s because you see that I care about our town and the people who live in it above anything else."

Perillo first ran for mayor in 2018 at the age of 93, and had no previous political experience. While campaigning ahead of Tuesday's election, he distributed a flyer highlighting the achievements of his first term. They include reducing municipal taxes, repaving 10.6 miles of sidewalks and roads, and investing in the acquisition of Wordell Park, a 62-acre open space where residents have enjoyed playing pickle ball, a sport that combines tennis and badminton.

"Tinton Falls is running like a fine watch under Mayor Perillo's leadership," the flyer said.

The mayor's daughter, Anna Mae, told The Washington Post that she views her father's late political career as an inspiration.

“He’s been a stellar father and grandfather,” she said. “He is my hero.”

Perillo's success in Tinton Falls is reminiscent of the late Collingdale Mayor Frank C. Kelly, who died in 2019 just before completing his 12th consecutive four-year term as mayor of the Delaware County borough. Kelly was 84 years old and had served for nearly 50 years since he was first elected in 1969. After his death, the pavilion at Collingdale Park was named in his honor.

Perillo pledged to enter his second term in Tinton Falls with the same energy he brought over the last four years.

"I promise to do my best everyday to ensure every member of our community can be proud to live in Tinton Falls!" he announced.