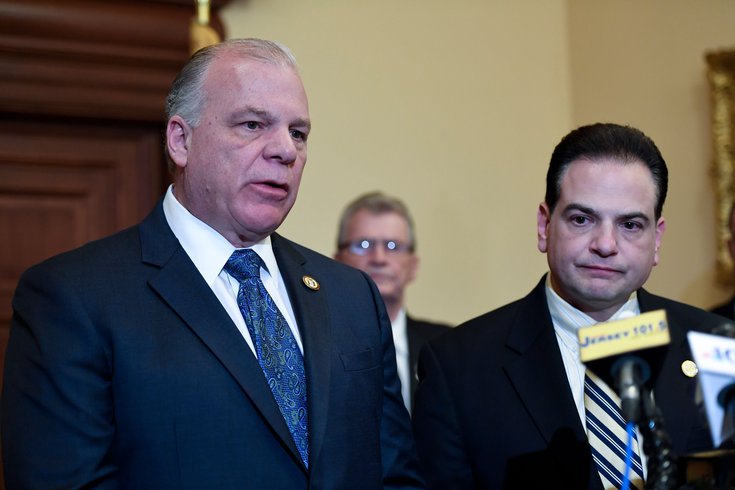 New Jersey Senate President Steve Sweeney, pictured above, is in jeopardy of losing his Third District seat in South Jersey to Republican Edward Durr. The longshot challenger is a trucker who tapped into an impressive groundswell of GOP support despite spending less than $10,000 on his campaign.

New Jersey Senate President Steve Sweeney has gone down in a shocking defeat to Republican challenger Ed Durr, the Raymour & Flanagan truck driver who overcame long odds to win the state's Third District Senate seat, according to the Associated Press.

The election was called around 11:30 a.m. Thursday, with Durr finishing about 2,300 votes ahead of Sweeney.

A key power broker in New Jersey politics, Sweeney was first elected to the Senate in 2004, representing parts of Cumberland, Gloucester and Salem counties. He rose to become Senate president in 2010 and has been the chamber's longest-running leader, with extensive influence among New Jersey unions and other vested allies across the state.

Durr, 58, grew up in South Jersey and decided to challenge Sweeney over his frustrations with the state's coronavirus response, from school policies to unemployment and a political culture he feels has become stale.

“Just the constant nepotism, corruption, ‘if you take care of me, I’ll take care of you deals,‘” Durr told Politico on Wednesday. “You don’t have evidence, you can’t get anyone arrested or prove anything, but there’s always ‘when there’s smoke there’s fire’ kind of statements.”

Durr's views may align with the tide of Republican voters who made a statement in yesterday's election, but his chances for victory seemed extremely remote heading into Tuesday.

A commercial truck driver for 25 years, Durr created buzz across the country on Wednesday when it was reported he had only spent $153 on his campaign during the primary, including Dunkin' Donuts for his small staff. He raised less than $10,000 total for a race that may now propel him into the state Senate and create a considerable power vacuum in the legislature.

How a truck driver spent $153 on his N.J. election campaign to likely dethrone a political kingpin https://t.co/Cypm4aDnKF pic.twitter.com/mCAuqMyGLI

To put the scale of Durr's victory in context, Sweeney won reelection in 2017 by an 18-point margin over Republican Fran Grenier. In that race, the New Jersey Education Association poured more than $5 million into its opposition to Sweeney, who had teamed up with former Republican Gov. Chris Christie on an unpopular pension reform deal and didn't push for a constitutional amendment that would have guaranteed full annual pension payments.

The forces at work behind Durr's unexpected success four years later raise questions that are echoing across New Jersey in the wake of Tuesday's election. Not only did Gov. Phil Murphy barely defeat Republican challenger Jack Ciattarelli, but two of Durr's Republican running mates, Bethanne McCarthy Patrick and Beth Sawyer, also appear poised to take down Democratic incumbents John Burzichelli and Adam Taliaferro for a pair of State Assembly seats in South Jersey.

Durr's campaign pledged to fight for lower taxes across the board, including a reduction to the state's high property tax rate, and aims to create a more friendly business environment in New Jersey.

The Logan Township, Gloucester County resident has described himself as a "constitutional conservative" whose background contrasts sharply with Sweeney, an officer in the Ironworkers union and a close ally of longtime South Jersey Democratic organizer George Norcross III.

Durr, a father of three with six grandchildren, took a determined door-to-door approach to build support for his Senate campaign. Despite the hard work, even he had a hard time believing he would give Sweeney a run for his money.

“I joked with people and I said, ‘I’m going to shock the world, I’m going to beat this man,’” Durr told NJ.com on Wednesday afternoon. “I was saying it, but really kind of joking. Because what chance did a person like me really stand against this man? He’s literally the second-most powerful person in the state of New Jersey.”

As vote tabulations are finalized, it's still too soon for Durr to declare victory on Wednesday evening, but he suddenly finds himself on the verge of a stunning victory that would set in motion a much larger shake-up in New Jersey politics.

Disclosure: George Norcross is the father of PhillyVoice Founder and Chairwoman Lexie Norcross.