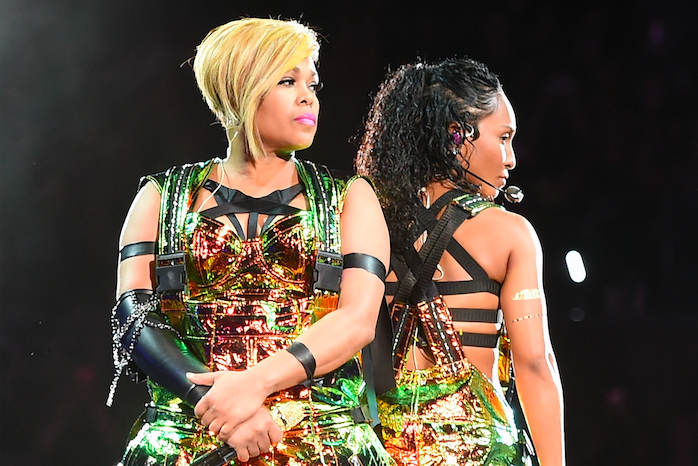 TLC headlines the “I Love the ‘90s" tour, which stops Friday, Sept. 1 at the BB&T Pavilion in Camden.

The most popular girl group in pop history is headlining the “I Love the ‘90s" tour. Rozonda "Chilli" Thomas and Tionne "T-Boz" Watkins are touring behind the act’s first album in 15 years.

It makes perfect sense for TLC to headline the “I Love the ‘90s” tour since the act killed it during the Clinton era. TLC sold more than 65 million albums during the ‘90s. According to Billboard magazine, the group was the seventh most successful act during the ‘90s.

RELATED STORIES: OneRepublic has probably produced hits from your favorite artist | Butch Vig can't junk Garbage | All grown up, New Kids on the Block still have 'The Right Stuff'

TLC – which scored nine top-10 hits on the Billboard Hot 100, including four number-one singles (“Creep,” "Waterfalls,” "No Scrubs” and “Unpretty”) – was huge. The act’s second album, “CrazySexyCool,” is the second best-selling album by a girl group. But some forget how massive TLC was during that era.

“We understand, since it’s a what-have-you-done-for-me-lately kind of world,” Thomas said while calling from her Atlanta home.

“Things changed, and we haven’t been as active as we once were.”

TLC had a reason for going on hiatus. Philadelphia native Lisa “Left Eye" Lopes died in a car accident 15 years ago in Honduras. Thomas and Watkins were understandably devastated.

“We couldn’t believe it when we heard the news,” Thomas said.

“We were just absolutely crushed by it. Lisa was like our sister. We didn’t know if we could ever perform or record again as TLC.”

But Thomas and Watkins did muster the strength to complete “3D,” their final album with Lopes. The album, which sold nearly 2 million copies, was released seven months after Lopes' death.

Thomas and Watkins hosted a reality show, “R U the Girl,” released a biographical film, a greatest hits album and embarked on a comeback tour since Lopes death.

We could never hire someone to fill Lisa’s shoes."

“We love working with each other,” Thomas said. “There was no reason to stop that.”

The tandem were asked over the years whether they would ever replace Lopes and/or release another TLC album.

“We could never hire someone to fill Lisa’s shoes,” Thomas said.

But they did decide to create a self-titled album in June. The project, which was the fastest-funded pop project in Kickstarter history, received contributions from some famous peers. Katy Perry, New Kids on the Block and Bette Midler each sent checks to support the album. More than $400,000 was raised.

“We were blown away by the response,” Thomas said.

The latest TLC album, simply titled, "TLC," is comprised of smooth and celebratory R&B. Thomas believes that this will be their last studio endeavor.

“I think this will be it,” Thomas said.

“We’ve released a number of albums and so, I think we’re good. We definitely have enough songs to play when we’re doing our shows.”