This is why marriage works for comedians Natasha Leggero & Moshe Kasher 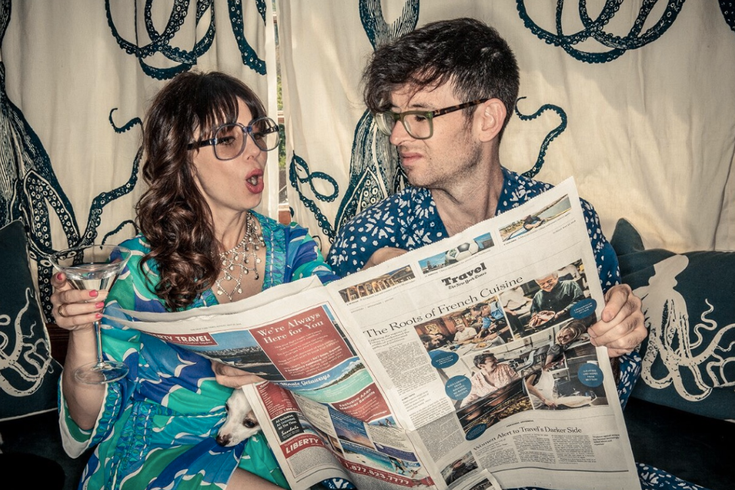 courtesy of the artist /for PhillyVoice

"We want to come back from our honeymoon with 10 kids. Maybe even grandkids. We have a record to break"

Caustic stand-up comics/actors Natasha Leggero and Moshe Kasher may be best known for their antics on Comedy Central (“Another Period” and “Problematic,” respectively), but, as young newlyweds, the two-some are trying to cover wedding expenses and give audiences great marital advice when the pair with good hair bring their “Honeymoon Tour” to the Trocadero Theatre, Thursday, August 3.

PV: You two have been married since 2015. Don’t you think you’re stretching out this “honeymoon tour” longer than The Who is its retirement shows?

NL: I think it’s still a very glamorous idea. We film “Another Period” in Rhode Island, which takes place in the Gilded Age, and we heard about this really rich couple who, after getting married, went on a 10-year honeymoon and came back with four kids.

MK: We wanted to do that, but we’re not that rich, so we’re making sure we make money on our honeymoon. We do, however, want to come back from our honeymoon with 10 kids. Maybe even grandkids. We have a record to break.

PV: Comedy Central aside, were you part of each other’s immediate circle before you got friendly?

MK: You mean before we got more than friendly? You know, Natasha and I have sex now. But it’s no friendly sex. No, comedy is a small world, so everybody knows everybody, and you just wait around to see if somebody likes you, then you start dating them. That’s how Richard Pryor and Lenny Bruce started dating.

MK: Size, if you know what I mean.

Comedy is a small world, so everybody knows everybody, and you just wait around to see if somebody likes you, then you start dating them. That’s how Richard Pryor and Lenny Bruce started dating."

MK: Beyond that, we have a lot in common. When people see us together they think we look good and make sense together because we both look desperate to be considered cool.

NL: You think that’s why we got together? I thought you were smart. You must have liked me for more superficial reasons.

MK: There it is. She liked me because I was smart, and I just happened to like a couple of her outfits.

PV: What have you learned from the other about the comic form?

NL: Moshe has this way of ending a set, where it’s just like the finale of a symphony. Me, I just walk off stage. We do this relationship-advice bit as the third act of our show, and while Moshe is trying to get off another punch line, I’m actually trying to help the couples.

MK: That’s one theory. Mine is that sometimes Natasha is so interested in helping people that we’re onstage with one couple or much longer than is needed. She’s literally trying to save these marriages. So that’s what I’ve learned from her – compassion. Truly, that third act is the most magical. People think we have actors or plants because it’s so one of a kind, but it’s all real.

NL: Usually we do get a wide comportment of problems, yet most are in the realm of pet peeves. So we do a barter system of solutions.

MK: Yeah, we had this one guy who came up and said that his father never hugged or touched him as a kid. I told him that perhaps we weren’t qualified to tackle that issue, as tumbleweeds rolled through the comedy club. We had one, too, where the wife complained that the husband bought her sex toys for her birthday. It was like a classic sitcom scenario where Al Bundy buys Peg Bundy a bowling ball for their anniversary. She doesn’t want it, so he takes it. It’s a salacious and sexy topic, but in reality, the two were trying to work out their sex problems, and he just threw toys as it rather than communicating openly. So in a weird way, it got emotionally real while just being all about a dildo.

PV: Do you think, as comedians – and not therapists – you’ve ever given lousy or amazing advice, and heard about it afterward?

MK: Every once in a while, we get a couple where the answer is obvious – end this relationship now – and there this one where the girl was 18 and [about] to go away to college, and the guy was going to stay behind, maintain this as a long distance relationship, and go to rehab. The answer was pretty obvious – allow her to live her life, have sex with other men, and have the time of her life. So, that happened, and six months later, the guy writes me a letter, threatening my life – no, I’m kidding. He wrote me to say that he got his life together, he moved to be with her, and they’re living life happily ever after