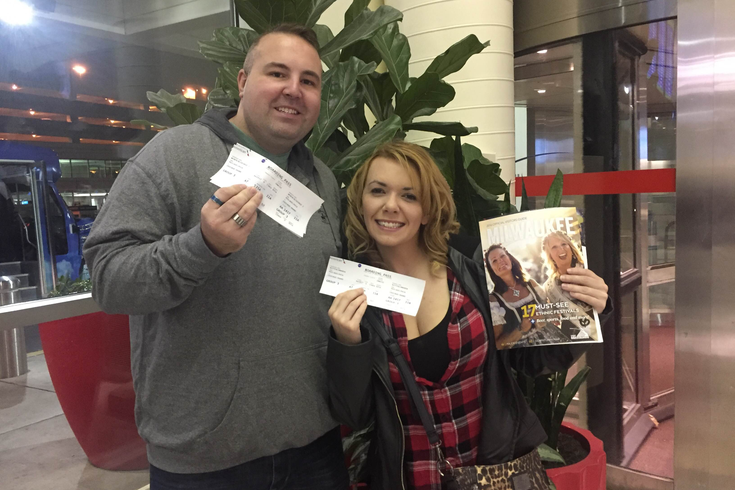 George Weber and Amanda Ritter love travel and adventure. They found out on Friday morning they were heading to Milwaukee for the weekend on a vacation booked by Top Secret Trip. The company's slogan is: 'Don't know. Just go.'

Friends Amanda Ritter and George Weber love to travel together.

They also like a bit of mystery and adventure, which is why they embraced a travel company named Top Secret Trip, a relatively new South Jersey business.

Their slogan is: "Don’t know. Just go." And that’s just what Ritter and Weber did early Friday morning, jetting off to – drumroll, please – Milwaukee.

They found out about the trip at 4 a.m. Friday and were thrilled to be catching a 6:05 a.m. flight to Chicago, then on to Milwaukee.

The evening before they knew their destination, the traveling duo met with PhillyVoice and Top Secret Trip co-creator Katie Miller, 29, at her "office" – a bar in the Westmont section of Haddon Township – to explain the appeal of going without knowing.

“I hope it is a place I have not thought of going to myself,” said Weber, who is 30.

“I hope I can pronounce it,” added Ritter, 29, who was on her second mystery trip. The last was to San Antonio, Texas.

“It is like being a kid at Christmas,” Ritter said. “As an adult, there’s so little that’s a surprise. There’s excitement to this.”

The two are inveterate travelers.

Frequently, the South Jersey residents take what they call "Philly Field Trips" – day trips to cultural and outdoorsy local destinations they would otherwise not visit. They’ve also been to Toronto and Montreal and on lots of other short weekend dashes.

Ritter, who works in a doctor’s office, said she likes traveling because “she learns things about herself.”

Weber, a chemist, thinks travel “opens you up. There is so much to explore. It opens your mindset.” Decidedly not a foodie in everyday life, he’s willing to try anything new when traveling. “I like going into groceries when I travel. It gives you a better cultural sense.”

That same impetus drew friends Katie Miller and Nick Walz to create Top Secret Trip after years of traveling, alone and together.

They decided on trying a company after Miller, who is in sales in the travel industry, had Walz, who does digital advertising, plan a secret destination trip that she loved to New Orleans.

While they formally began the company in April of 2015, they then spent months developing a website and questionnaire. Rolling, they booked five trips in the last month, according to Miller.

Ritter and Weber know each other’s tastes well enough that he filled out the form, with a few texted questions to Ritter.

They set a $500-per-person budget, said they wanted a place with a nightlife and plenty of places to see by day, including something outdoors.

Miller and Walz, using the questionnaires, each come up with a list of three destinations, then compare.

Comparing notes with Walz, Miller said they narrow the choice to two, then research. Flight times and budget are major factors.

Sometimes they have phone consults, and they infrequently meet a client in person.

Older clients – they have booked trips for two couples in their 50s – tend to be more specific about what they want and don’t want.

Top Secret Trip books the travel and the accommodations and takes 10 percent of the budget as a booking fee. The least expensive trip they have done was $300 for a weekend, the most costly $2,000 for a more distant extended trip.

They supply a list of sightseeing options to check out upon arrival, but the daily itinerary is left to the travelers.

Ritter said not doing the upfront planning makes it more fun for her.

And she really likes surprises – including Milwaukee.

"Milwaukee is a place I would not have thought of going to just on a whim. Seeing Milwaukee on the reveal was really exciting. My mind started thinking of all the things I know about Wisconsin and Milwaukee.

"Stepping off the plane into the streets felt like the whole world was opening up in front of us to experience; starting with this piece right here. We are very happy with this choice and can not wait to get out and explore the city. Everything seems so new and ready for exploration."