Valerie Jarrett praised Philadelphia for passing its own law 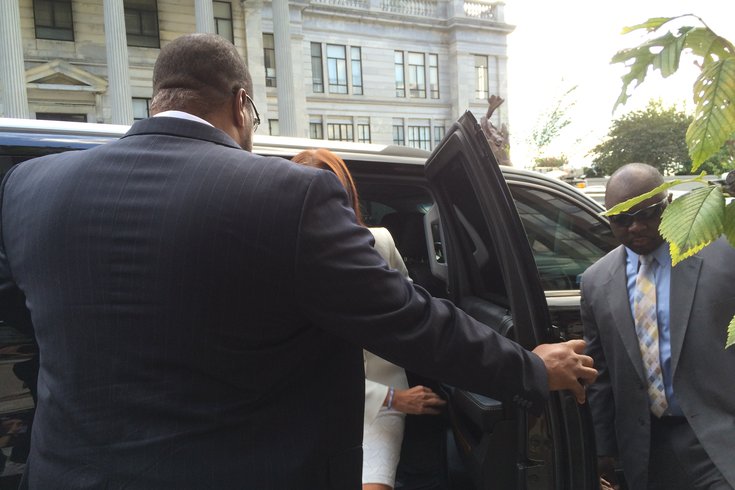 To advance policies proposed by the Obama administration but stalled in Congress, a senior White House adviser came to praise Philadelphia for passing paid sick leave legislation during a meeting Tuesday with Mayor Michael Nutter at City Hall.

Valerie Jarrett, President Obama's senior adviser, said the issue was important because millions of workers were having to choose between going to work sick or paying their bills. President Obama pushed for national legislation that would require companies to give workers paid sick time off during his last State of the Union address.
The idea hit a roadblock, however, in Congress. Some Republicans and business leaders say that mandating time off could harm hiring and the bottom line of small, struggling companies.
That has not stopped several state and local governments from passing their own legislation. Philadelphia passed paid sick leave in February on a 14-2 vote, which will provide about five paid days of sick time annually for full-time employees. The policy will go into effect in May. Jarrett used her meeting with Nutter to highlight the city’s action as an example for others to follow.
“As we are waiting for Congress, the president is challenging us to work with a coalition of the willing,” Jarrett said. “Philadelphia is leading on this issue.”
Jarrett said millions of employees are put in a difficult position. While many companies offer paid time off when employees get sick, they are not required to and some don't. Nutter tried to make the issue personal. In response to a statement about how some parents were missing the births of their children out of fear of missing out on pay, he told the story of his child Olivia’s birth more than 20 years ago.
“I was in a meeting on the third floor [of City Hall] and got a call that I had to immediately come to the hospital,” Nutter said. If he couldn’t have left work, “it is not like you can do it over.”
Before Philadelphia’s policy goes into effect, however, it is under threat on the state level. The state Senate recently passed a Republican-led bill aimed at preventing municipalities like Philadelphia from passing rules that mandate paid sick time off. It now heads to the General Assembly, which is controlled by Republicans. For the bill to become law, however, Tom Wolf, the state’s Democratic Governor, would have to sign on.
And while the Legislature is trying to halt the city's law, it is only the latest roadblock for paid sick leave in Philadelphia. Nutter vetoed the proposal twice before signing it earlier this year.
At the forum, he said he was never against the idea but had previously rejected it because of the economy.
“Any, quote-un-quote, opposition was not about the issue, it was about the timing,” said Nutter adding that he wanted to see an improved economy before he signed on. “At a point … the government has to take action.”
Nutter said that as a mayor during the recession, he was worried that companies could easily flee to surrounding communities that didn’t have the law. A national law, he said, would provide rules for everyone, eliminating this concern.
Opponents say small businesses can ill afford the sick pay mandate. The National Federation of Independent Business said concerns raised by businesses were real and important.
“The majority of businesses … will work with their employees and try to be flexible in that nature,” said Neal Lesher, the federation's state legislative director. “The other reality is that not every business can afford to offer that kind of benefit.”
“It is somewhat curious to us how [Nutter] has done a 180, coming to the conclusion that this is good for small business,” said Lesher referring to the mayor’s earlier vetoes. In 2013 Nutter said, “The burden businesses would face in meeting the requirements of this bill would deter job creation and decrease the competitiveness of our city at a time when we can ill afford it,” according to Law 360.
Jarrett said now, with the economy improving, a mandate was needed.
“We are the only developed country that doesn’t have paid sick leave,” Jarrett said. “So, we have to bring our workforce and our companies into the 21st century.”
“National policy is a minimum threshold,” she said. “Just as we [use] the minimum wage as a national floor, we are going to do the same thing with paid sick leave.”