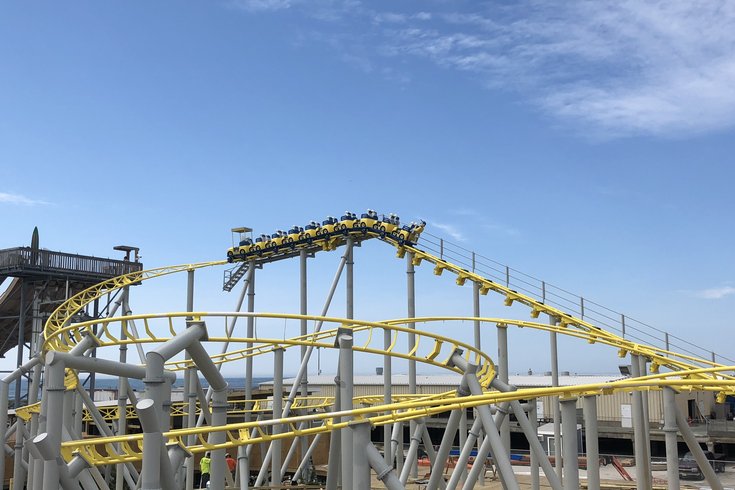 Morey's Pier is opening its newest roller coaster, the Runaway Tram, on July 2 at the Surfside Amusement Pier.

Morey's Piers is celebrating 50 years on the Wildwood Boardwalk, and what better way to mark the occasion than by honoring the boardwalk's iconic tram cars with a new roller coaster.

The Runaway Tram, a family-friendly ride on Morey's Surfside Pier will officially open on July 2, just in time for the long holiday weekend.

It's modeled after the Wildwood Sightseer Tramcar, which opened on the Wildwood Boardwalk in 1949.  The trackless train takes beachgoers along the two mile stretch of the boardwalk. The tram car originally debuted at the 1939 New York World's Fair. It has carried an estimated 20 million riders over its 70 years in operation.

The newest addition to Surfside Pier cost $4 million and climbs 40 feet before coasting down 922 feet of track at speeds close to 30 mph. In order to make room for the new ride, Morey's Pier moved around seven other rides and reconfigured Surfside Pier.

Morey's Piers, which now spans six beach blocks, was founded in 1969. Today it has more than 100 rides and attractions, including three amusement piers and two beachfront water parks along the boardwalk in Wildwood, New Jersey.

Surfiside Amusement Pier is located at 26th Avenue on the boardwalk.