The Trocadero aims to reopen as a revamped concert venue and restaurant, state records show

The historic Center City theater and live music destination closed in 2019. It will get $2.5 million in grant funding to aid its renovations 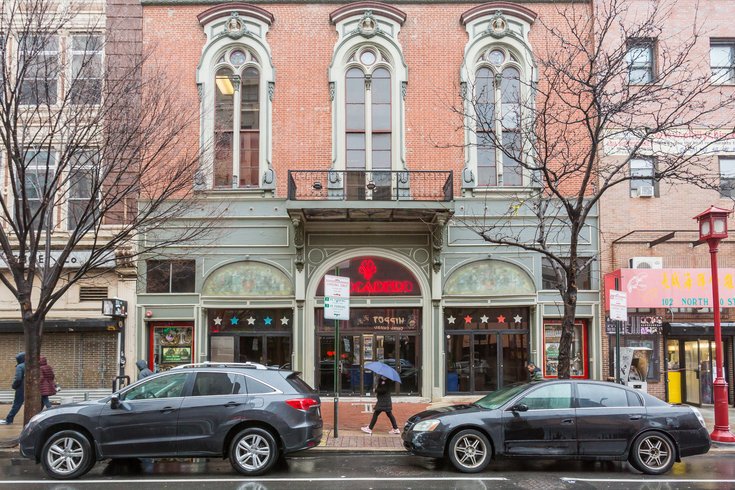 The historic Trocadero Theatre, at 1003 Arch St., closed in 2019 after a long run as one of Philly's most intimate music venues. State records show the building will be fully renovated with the help of a $2.5 million grant.

The closure of the Trocadero Theatre more than three years ago was a dark day for live music in Philadelphia, which lost a venue that was treasured for its dingy character and storied past.

The building at 1003 Arch St. in Chinatown, built in 1870, has sat unused since, with no apparent signs of life pointing to its future use. It now looks to be on track for a full renovation in the years ahead, according to documents from Pennsylvania's Redevelopment Assistance Capital Program.

The state grant program's 2022 list of award recipients includes an entry for Northwest Arch LLC, a legal entity managed by Trocadero owner Joanna Pang. The RACP document shows that a $2.5 million grant has been awarded for a project to restore the venue. Northwest Arch LLC had requested $5 million. The news was first reported by PhillyMag.

Here's the project description included in the RACP document:

This project will entail a complete renovation of the exterior and interior of the Trocadero building. The end product will be a fully updated first-class concert venue, entertainment space and full-service restaurant. Renovations will include woodwork, painting, flooring, doors and window, roofing, lighting, signage, staging, bathrooms, dome ceiling, elevator, electric, plumbing and HVAC upgrades. Special attention will be given to preserving the historic features and unique architectural elements of the building, notably the original gallery benches, the double garland plaster work that frames the proscenium, the plaster lions flanking the stage, and the cast iron ornamental columns in the auditorium.

The Trocadero Theatre was listed on the Philadelphia Register of Historic Places in 1973, and later on the National Register of Historic Places in 1978. It was designed by Edwin Forrest Durang, a prominent Philadelphia architect who primarily planned churches in the region, including Fishtown's St. Laurentius Church, which is currently being demolished.

Originally called the Arch Street Opera House, the Trocadero was a popular venue for burlesque and vaudeville shows, as well as opera concerts, musical comedies and striptease. After Pang's father purchased the building in the late 1970s, it became a Chinese-themed art house cinema before emerging as a premiere downtown venue for rock and punk shows in the 1990s, holding a cozy capacity — to put it mildly — of about 1,200 people.

During its heyday, the Troc hosted titans like Bob Dylan, Pearl Jam, Beck, Foo Fighters, Guns N' Roses, Neil Young and Radiohead. In more recent years, before its closure, the venue welcomed stars like Kendrick Lamar and Kacey Musgraves. Music fans could count on the Troc for just about everything in between, from Pavement, Elliott Smith and Guided By Voices to Rancid, Lamb of God and Titus Andronicus.

Over the last decade, the emergence of bigger and more modern venues in Philadelphia, from Union Transfer to World Cafe Live and the Theater of Living Arts, cut into the Trocodero's ability to book shows. The more recent openings of the renovated Met, The Fillmore and Brooklyn Bowl also seemed to point toward a difficult path ahead for the Troc as a live music venue.

Pang filed for bankruptcy in 2011, but managed to restructure the Trocadero the following year and keep it afloat for another seven years. Devoted fans tried to prevent it from closing in 2019, but those attempts were unsuccessful and Pang acknowledged she couldn't keep up.

"This was home to me," Pang told Variety at the time of the Troc's closing. "But the landscape of the business has changed in the last five years. It's harder now to be an independently run venue — it's a different world. There are bigger rooms run by bigger concert corporations."

Since the venue's closure, Pang has not spoken publicly about the road ahead for the building.

The RACP grant is a positive sign that something is afoot to restore the Troc to its former glory, with a restaurant that can help anchor the location. A timeline for the project was not spelled out in the project description.

All signs point to Philadelphia getting back one of its most intimate music venues, one whose history can pull bigger acts than the tiny capacity might suggest. It's going to be tough scoring tickets when the Troc makes its eventual comeback.