A handwritten note, addressed 'Dear King,' presents another instance of access and influence for associates of the exclusive club

In late 2017, on one of President Donald Trump’s retreats to Mar-a-Lago, his private club in Palm Beach, Florida, he caught up with an old friend: Albert Hazzouri.

When Hazzouri is not at Mar-a-Lago, he’s a cosmetic dentist in Scranton, Pennsylvania. At a campaign rally there in 2016, Trump gave him a shoutout: “Stand up, Albert. Where the hell are you, Albert? Stand up, Albert. He’s a good golfer, but I’m actually a better golfer than him. Right?”

Shortly after Hazzouri and Trump saw each other in late 2017, Hazzouri followed up with a message, scrawled on Mar-a-Lago stationery. Here’s the letter: 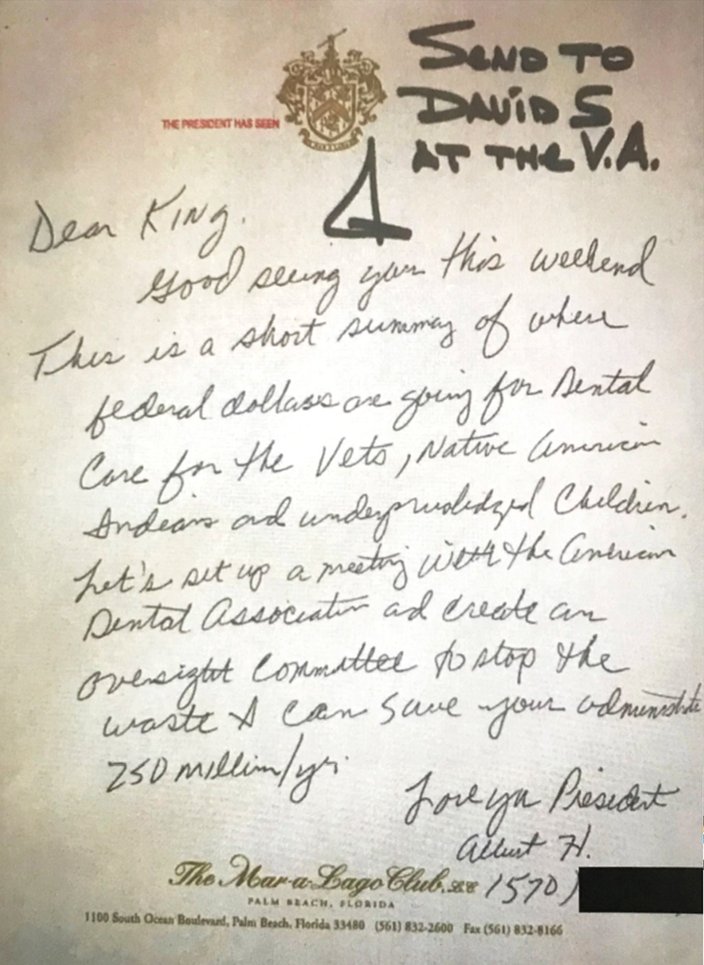 In a telephone interview, Hazzouri said he sent the note as a favor to the 163,000-member American Dental Association. He said he had only the vaguest sense of what proposal he was vouching for.

“I’m really not involved in any politics, I’m just a small-time dentist,” he said. “I guess there’s a lot of money spent on veterans’ care and American Native Indians’ care, and I guess they wanted to have a little hand in it, the American Dental Association, to try to guide what’s going on or whatever.”

The idea seemed to intrigue Trump. He took a thick marker and wrote on top of Hazzouri’s note, “Send to David S at the V.A.,” referring to David Shulkin, then the secretary of veterans affairs. Next to the Mar-a-Lago coat of arms, an aide stamped: “The president has seen.”

It was not the first time Mar-a-Lago membership had bestowed access to the VA. As ProPublica revealed last year, Trump handed sweeping influence over the department to club member Ike Perlmutter, who is the chairman of Marvel Entertainment and was a major donor supporting Trump’s campaign, along with a physician and a lawyer who are regular guests at the resort. The trio, known as the “Mar-a-Lago Crowd,” acted as a shadow leadership for the department, reviewing all manner of policy and personnel decisions, including budgeting and contracting. The House veterans committee is now investigating the trio’s “alleged improper influence.”

Beyond the VA, Trump’s presidency has been rife with examples of special interests seeking influence through business associates or friends and family, rather than going through the normal channels. Shortly after the election, the Australian ambassador reportedly managed to contact Trump not through the State Department but thanks to golfer Greg Norman, and Trump’s post-election call with the Vietnamese premier was facilitated by Marc Kasowitz, a personal lawyer for Trump. Megadonor Sheldon Adelson helped a friend’s obscure company secure a research deal with the Environmental Protection Agency, and inaugural chairman Tom Barrack provided support to a company seeking to export nuclear power technology to Saudi Arabia.

In Hazzouri’s case, the details of his pitch to “create an oversight committee” are murky. A spokeswoman for the American Dental Association, Katherine Merullo, declined to elaborate on the proposal. Michael Graham, who heads the ADA's lobbying arm in Washington, recalled that one of his staffers raised the topic with Hazzouri, but Graham said he didn’t know the details. In general, Graham said, the organization wants the government to pay for more dental services.

“The ADA has been looking into how we can get involved in veterans’ issues,” Graham said. “Lots of vets may not be eligible but need care.”

The VA provides dental care only in limited instances, primarily when veterans have a dental injury related to their service. Many veterans also have Medicare, but that doesn’t cover most dental services either. The ADA has lobbied on bills that would expand dental services for veterans, arguing that better dental care leads to better health overall. Of course, it would also lead to more billable patients for the ADA’s members.

Hazzouri’s overture doesn’t appear to have succeeded. Shulkin, who was fired in March 2018, said in an email that he did not recall having received the message. Hazzouri said neither he nor the ADA ever got a meeting.

Hazzouri did, however, reference the proposal a few months later, in an effort to open an office in Florida.

“My intention is to establish a small office in order to treat the President, his family and visitors who may have dental needs while conducting official business,” Hazzouri wrote to the Florida Board of Dentistry in a February 2018 letter published by Politico. “An additional intention is to have the office serve as a dental delivery site on selected dates for U.S. veterans or children from underserved populations.”

Despite invoking the project as part of a bid to expand his business, Hazzouri said he wasn’t pursuing any personal benefit by pitching the ADA’s proposal to Trump. “I wasn’t doing this for any opportunity,” he said. “There are areas in Florida where they said it would be awesome to donate time.”

Hazzouri’s Florida office never materialized either: According to the minutes of his board hearing, Hazzouri hadn’t completed a required examination and withdrew his application for a license to practice in the state.

Hazzouri declined to explain why his note to Trump addressed him as “King,” calling it an inside joke from long before Trump became president. “I call other people King,” he said. “It’s a very personal thing.”