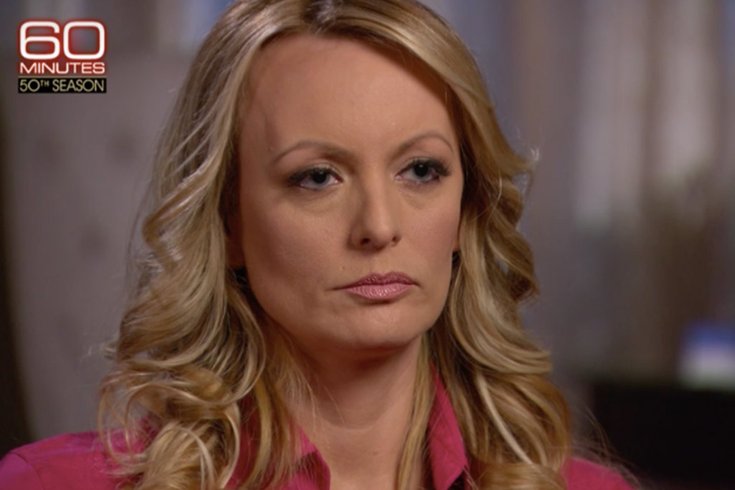 Adult film actress Stormy Daniels was interviewed by Anderson Cooper on "60 Minutes" about her alleged sexual affair with President Donald Trump in 2006.

Adult film actress Stormy Daniels told CBS's "60 Minutes" that she signed a non-disclosure agreement because she feared for her well-being.

In an interview that was aired Sunday night, Daniels recounted a 2011 incident in Las Vegas, when she was approached in a parking lot by a man who told not to discuss her alleged sexual encounter with Trump five years earlier.

"Leave Trump alone. Forget the story," Daniels recalled man saying and then his sudden focus on her infant daughter, who was sitting in the back seat. "That's a beautiful little girl. It'd be a shame if something happened to her mom," the man said, Daniels told Anderson Cooper.

Daniels, whose legal name is Stephanie Clifford, said the confrontation was still on her mind five years later, when Trump received the Republican nomination for president in 2016, and was elected. Trump, through spokespeople, denies an affair with Daniels.

Daniels said she signed a strict, broad non-disclosure agreement weeks before the election after Trump attorney Michael Cohen offered her $130,000 to sign it.

The "60 Minutes" interview (transcript here) was the first opportunity for Daniels to tell her side of the story, and even before it was over, people flocked to social media to have their say:

Congratulations. The bottom has arrived.#StormyDanielsDay

#StormyDanielsDay “how do we know you’re telling the truth” because they paid her to keep quiet. Duh.

Hi. I just landed from planet Mars. Comparing your adult film star lover to your daughter is normal, right? #StormyDanielsDay

This is where we are. An adult film star is describing her affair with a married man, who's now the sitting President of the United States. This is the same President that evangelicals have sworn was ordained by God for such a time as this.#StormyDanielsDay

#StormyDanielsDay She was protecting her child! Mothers will do anything for children. She is telling the truth!

I’m seeing the terms “whore,” “slut,” etc. being thrown around a lot. Look, call him what you will, he’s still your president. #StormyDanielsDay

The #60Minutes ticking sound has never been more suitable to the moment. #StormyDanielsDay

Other people were determined to use the interview as an opportunity to defend Donald Trump and slam CBS:

Stormy Daniels is a prostitute.
Nothing more.
Nothing less.

Too bad she didn’t buy some integrity with that $130K that she was allegedly paid.

I’d rather pull out my finger nails with pliers than watch a hoe give an interview on 60 minutes.

I just can’t believe #StormyDanielsDay. Nothing more than a gold digger and any company coming to her aid will lose me as a customer.

60 minutes now lowers themselves to the same level as these dirty gossip magazines. This isn’t news. Are they just trying to embarrass the President and put him in divorce court. Almost every president clear back to FDR and Thomas Jefferson had affairs. 60 minutes Blocked.