Two restaurants in the Gayborhood hit by thieves on same night 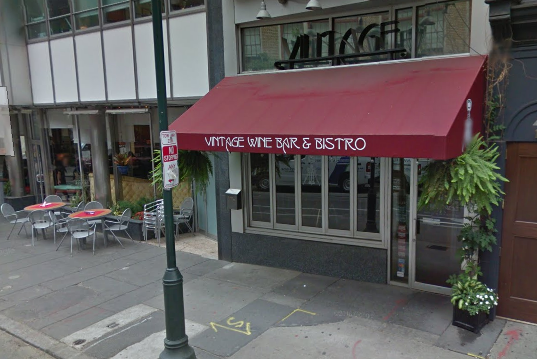 Two Center City restaurants just steps from each other were hit by thieves early Monday morning, according to Philadelphia police.

In the first incident, an armed robber held up a bartender at Vintage Wine Bar at 129 S. 13th St. at 12:30 a.m., fleeing with about $500 in cash. Opa, a nearby restaurant at 1311 Sansom St. that was closed at the time, was burglarized sometime later overnight, perhaps within an hour.

Police declined to say whether they believe the incidents in the city's Gayborhood section are related.

Police said a man pointed a gun at the Vintage bartender, who was the only person at the front of the bar. The suspect ordered the bartender to place money from the register and tip envelopes into a small green Velcro bag.

The man then told the bartender to lie on the floor while he left through the front door, police said.

Police described the assailant as a black man between the ages of 25 to 35, about 6-foot-3 with a medium build. He was wore a dark-colored face mask, a red hooded sweatshirt with white lettering across the chest, dark pants and gloves.

At Opa, around the corner from VinThe owner received a notification from his alarm company at 1:21 a.m., police said. When he arrived at 6:45 a.m., he noticed that someone had broken into the cash register after entering through an unlocked front window. About $300 was missing.

Police do not have a description of the suspect.