UD: No hate crime -- they were lanterns, not nooses

Not everyone convinced; university officials say dialog should be open on race 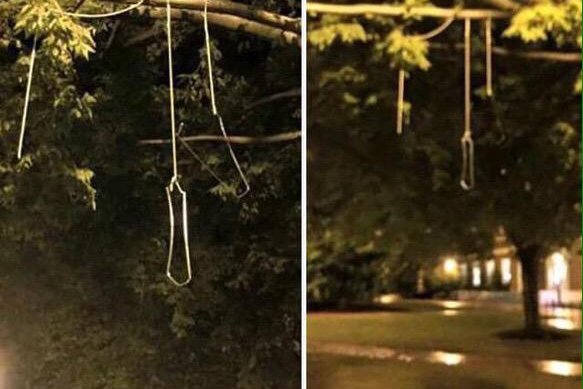 Items that resembled nooses were discovered on the campus of the University of Delaware, but were determined by police to be lanterns.

Items hanging from trees on the campus of the University of Delaware were paper lanterns, not nooses, and therefore not the product of a hate crime, officials announced Wednesday, while not everyone is satisfied with that explanation.

University officials investigated after a student reported seeing what some thought looked like nooses from a tree in front of the school's Mitchell Hall.

Well, as it turns out, police say those were actually just paper lanterns leftover from an on-campus event.

Yet that doesn't mean the university shouldn't use the opportunity to open up a dialog -- presumably about race relations, considering the deep-rooted symbolism of hatred hanging nooses represent -- acting president Nancy M. Targett said in a statement and Youtube video:

When word got out about the items, then believed to be nooses, many expressed outrage on Twitter:

THERE ARE NOOSES HANGING ON UD CAMPUS, OKAY .

I still can't grasp the thought that somebody really put nooses up at UD..this isn't a small matter this is really crazy

Even after the announcement that the nooses were not lanterns. Some people on Twitter, however, remain convinced the hanging items were nooses:

UD: They weren't nooses. They were lantern remnants Me: pic.twitter.com/0YmLviFQUN

Having a very hard time believing that the nooses at UD were a mistake from lanterns. A message was made clear to Black Students

The reason some might not be so sure the items were decorations was because, according to Mike Hinson of Buzzfeed and a university professor, they were found in the same place a Black Lives Matters rally took place the day before.

I sure hope this twitter story about nooses on UD campus is false. Terrible if true, especially after a Black Lives Matter rally.

Nooses up at UD in the same spot a #BlackLivesMatter rally took place the day prior. Yo @delawareonline, what's good? pic.twitter.com/dViXoKw668

In order to alleviate the tension, Targett will meet with students to discuss the incident on campus at 4:30 p.m.

Update: @UDelPolice determine incident was not a hate crime. Please stand with me on the Green @ 4:30PM #VoicesOfUDel http://t.co/ob7S5NUnPI