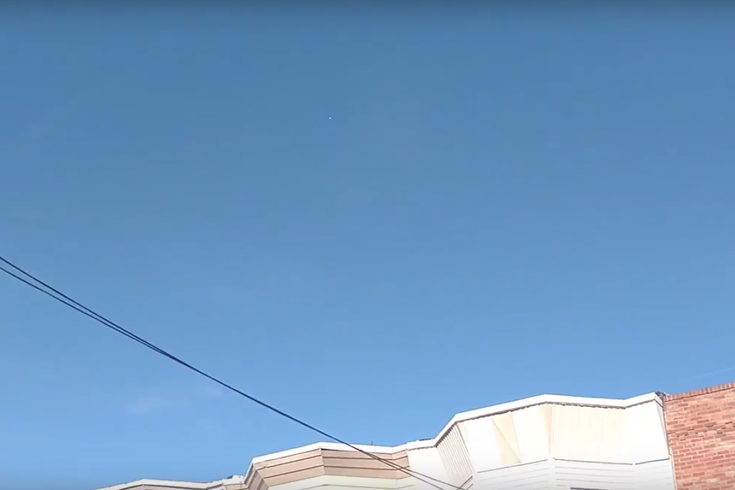 This screenshot is of a YouTube video showing a white dot, purportedly over the skies of South Philly.

Did aliens visit the skies over South Philly on a recent sunny afternoon? Probably not, as one expert notes — but you can never say for sure.

A YouTube video posted Wednesday, purportedly recorded near 20th and Porter streets in South Philly shows a white object hovering in the sky. Two people heard in the video describe the object as "metallic," and say at one point the object appears to quickly move straight down.

And while, according to a local astronomer, there's most likely a logical explanation to what's seen in the footage, that doesn't mean you should rule out the possibility of something from another world.

Take a look at the video below. (Disclaimer: Video contains some explicit language):

Dr. Derrick Pitts, lead astronomer at The Franklin Institute, said — based on solely what's seen in the video — there's one obvious explanation, but it's tough to make any definitive conclusions.

Upon first glance, the item could be another planet, Pitts said in an email. The problem with that is the day of the year, the time of day and the fact that the object appears to move.

"My first thought was it appears very much like what the planet Venus looks like in full daylight and yes, Venus is visible to the naked eye when it’s in the correct position relative to the Sun," Pitts said.  "But this isn’t Venus; (Venus) is too close to the Sun right now to be seen."

"Chasing down the planet line, Jupiter was at that approximate distance from the moon on that day, but Jupiter is very difficult to see naked eye under full daylight aaannnnddd it won’t make any sudden changes in position."

A more likely explanation — as many of you quickly pointed out before this article was updated — is that it's a drone.

Pitts said the man-made aircrafts are increasingly more available and have the ability to move through the air erratically.

"There are millions of them now under ownership and operation of anyone and everyone who wants one, and being so small and low mass, it's quite easy for a drone or drone-like aircraft to be able to accelerate to high velocity and be able to shift direction quickly."

Case closed, right? Not so fast. Pitts made a point not to eliminate the possibility of some alien life form.

"That’s not to say it couldn’t be an extraterrestrial spacecraft operated by aliens from another star system or galaxy, just far more unlikely to be aliens than a drone or some other earth-made device."

So, yeah: That little white dot over South Philly probably wasn't an alien spacecraft. But even an astronomer can dream...