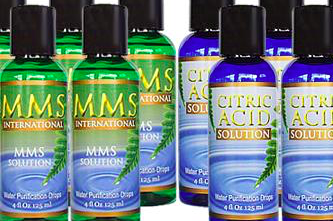 Miracle Mineral Solution (MMS) has been falsely marketed in third-world countries as a cure for a variety of diseases and conditions, from cancer and HIV/AIDS to malaria and herpes. In reality, the solution is a powerful bleach used in the textile industry.

A Burlington County pastor has come under fire for allegedly distributing a "miracle cure" to the people of Uganda containing ingredients that make up industrial bleach.

Robert Baldwin, who runs Global Healing Christian Missions, has reportedly been importing the ingredients for "miracle mineral solution" (MMS) from China and training a network of about 1,200 Ugandan clerics to use it to treat maladies ranging from cancer and HIV/AIDS to malaria, according to The Guardian.

The substance, chlorine dioxide, is a powerful bleach used in the textile industry. Balwin, 52, was trained as a student nurse but has no other medical qualifications. He told The Guardian he chose to distribute the so-called "healing water" in Uganda because the country has comparatively minimal regulation.

In the the United States, the FDA has warned that ingesting chlorine dioxide can lead to nausea, vomiting and severe dehydration. The substance is tightly controlled in places like the United States and United Kingdom — and outright banned in Canada and Ireland.

The U.S. Mission in Uganda said it is aware of the allegations against Baldwin's group.

Sick congregants at Ugandan churches, including infants, have reportedly received MMS under the guise that it's a natural remedy with a religious basis to promote healing.

Funding sources for the MMS distribution in Uganda remain hazy, as the substance is reportedly given to congregations free of charge. Baldwin has allegedly received financial assistance from a British clairvoyant identified as 25-year-old Sam Little.

There is no credibly published medical evidence supporting the use of MMS as a cure for any ailment, but its use has been reported under other circumstances as well, including attempts to treat autism with it.

Baldwin shut down the website for Global Healing this week amid growing outrage over the report.

"I’m getting hate email. People are calling me Satan,” Baldwin told NJ Advance Media on Monday. “All I wanted to do is help people using natural healing therapies."

There was no immediate indication of a criminal investigation into the use of MMS in Uganda.