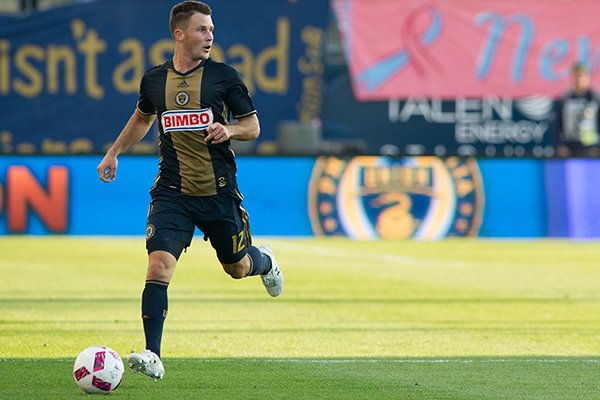 Keegan Rosenberry requires protection in the upcoming expansion draft because he is not in the Generation Adidas program.

All is quiet on the Union front, which is typical for this time of the year.

Most transfer activity takes place in January and February, though we do have the expansion draft coming up next week. Re-entry and free agency will begin shortly after.

Here are some of your questions from December 8th.

@Kevin_Kinkead Will we see Ray Gaddis on the field or has he become a bench warmer?

It looks like Ray is the first-choice backup at both right fullback and left fullback.

It's odd to think that he was handed the starting job in 2015 by Jim Curtin, who traded Sheanon Williams to Houston. When Gaddis finally had a shot to play on the right side, on his stronger foot, he was then relegated to the bench with the addition of Keegan Rosenberry.

The ironic thing about Ray playing three years out of position at left back is that it actually gives him some more flexibility in this reserve role because now he can cover for Rosenberry or Fabinho.

@Kevin_Kinkead If Blake is sold this winter. Is the #1 McCarthy or do they spend the money on a #1?

I think they should go out and get a more experienced No. 1 from within MLS.

McCarthy can be a good No. 2 for the Union, and I know that Curtin likes him, but I think if you can get somebody like Steve Clark in the re-entry draft, then that's the better way to proceed.

Not that I've heard.

The first time he came back to Philly, Peter Nowak had just been fired and John Hackworth was given the job. That paved the way for him to return after a messy split.

@Kevin_Kinkead what are the Union gonna spend their new found Garber bucks on?

Hopefully a striker. They used TAM on Alberg and Ilsinho last year if I recall correctly.

@Kevin_Kinkead what DP striker do you see the Union targeting?

I think a realistic target is somebody in the $600,000 to $1,000,000 range, maybe from the Netherlands (Earnie Stewart connections) or Germany. You don't have to spend Robbie Keane type of money to get a decent striker, especially when you've got Michael de Leeuw and Ola Kamara both earning under $700k.

@Kevin_Kinkead are we due for a new 3rd jersey? Id love to buy a new jersey b4 my baby is born in May and all of my money goes to diapers

Not sure, but I'd burn the white jerseys because they always seem to play like crap while wearing them.

For what it's worth, my favorite Union kits were the white tops and blue shorts they wore in the Everton friendly back in 2011.

I don't have kids, but I've heard horror stories about diaper costs.

@Kevin_Kinkead : With the new signings in Atlanta is there any chance of the U targeting young DPs?

Maybe, but it's more likely that they just bring up young players through the academy.

The only young DP in Union history was Fernando Aristeguieta.

It means that the uphill battle is going to be even more difficult. Atlanta doesn't appear to be messing around.

@Kevin_Kinkead why can't we have nice things like Toronto and Seattle?

That's a question for Don Garber. Both of those teams have received preferential treatment in the past, but they also spend money and raise the profile of Major League Soccer in ways that Philadelphia doesn't.

@Kevin_Kinkead will we be a playoff contender in 2017

They can certainly get in, but I can't see them "contending."

@Kevin_Kinkead is there playing time for trusty and jones

I hope so. I think Jones is closer.

What's the point of signing them if you don't play them? It's one thing to make these symbolic homegrown signings, but you've gotta take the leap and put them on the field.

@Kevin_Kinkead Would Huntelaar return to the site of The Incident™

I highly doubt it, but I would take him in a heartbeat, even at age 33.

(Klaas-Jan Huntelaar suffered a concussion in a 2012 friendly against the Union, just a few weeks before the Euros)

@Kevin_Kinkead If we get a DP striker, is Sapong a bench player or starting winger opposite Pontius?

I think he's a bench player with Ilsinho starting on the right wing.

You could use C.J. as a center forward sub, a winger sub, or throw him on the field as a second striker in late game situations. Even if you upgrade the forward spot next year, there are a lot of ways in which Sapong can contribute.

@Kevin_Kinkead Is there a time table for Edu?

There is not, and they would be smart to keep it that way.

The biggest issue with Edu this season was that the team put out a three-month time frame on his return from the stress fracture, and that created unrealistic expectations. It was a really frustrating story to cover, and I can't imagine what it was like for Mo and the technical staff.

@Kevin_Kinkead Besides striker, what will team target in the offseason?

I think they really need a legit number eight, especially if the plan is to move Alejandro Bedoya into Tranquillo Barnetta's spot. Vince Nogueira was a big part of this team and his absence was noticeable down the stretch.

Otherwise, d-mid might be another spot to look at, especially with Edu's injury situation. If the season started next week, you'd have Brian Carroll and Warren Creavalle to choose from in that spot, with either Derrick Jones or Bedoya playing the No. 8.

I don't know. I didn't pursue that story. That connection came from a South American report. There was also the European report connecting Philly to winger Daryl Horgan, but it looks like he's headed to Preston North End.

@Kevin_Kinkead Where is the U in five years?

Hopefully in the second or third round of the playoffs.

I worry that they won't be able to compete against the higher-spending teams in the Eastern Conference. I just don't see how Philly can ever eclipse Toronto, the New Yorks or Atlanta, assuming things stay the same.

@Kevin_Kinkead U are really pushing youth development but is their setup better than Dallas, LA, & RBNY who are already producing MLS talent

Hard to say, because they are a few years behind those other programs. Those other setups have been around for a bit longer. Dallas and NY probably have the best youth structures in the U.S.

@Kevin_Kinkead When do the expansion lists come out? Who can we expect to be unprotected?

Not sure when they come out, but off the top of my head:

@Kevin_Kinkead is Brian Carrol a highlander?

He does appear to be immortal.