Union Notes: breathing issues, bad stadiums and getting bailed out by the refs 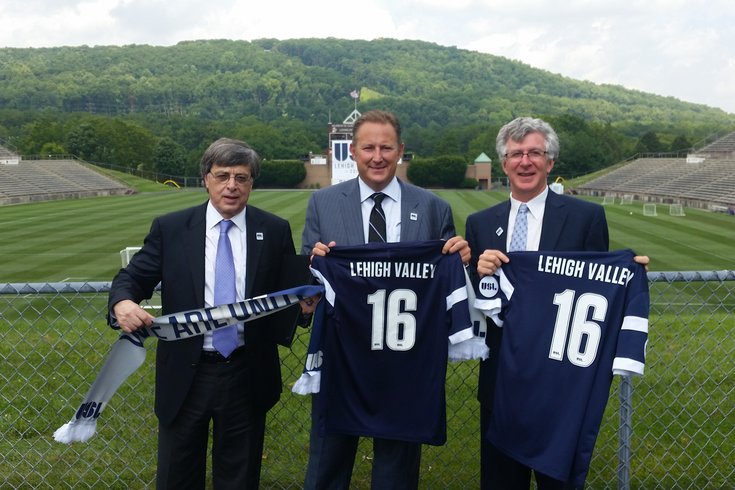 The creation of Bethlehem Steel in 2015 resulted in the Philadelphia Union dissolving their five-year partnership with the Harrisburg City Islanders.

With the June international break mostly in the rearview mirror, Jim Curtin's Philadelphia Union return to the field Wednesday night for a fourth-round U.S. Open Cup game against the Harrisburg City Islanders.

Curtin confirmed on Tuesday that backup goalkeeper John McCarthy will start in place of Andre Blake, who is still with the Jamaican national team.

Look for a lineup that includes some fringe Union starters, such as Marcus Epps, Adam Najem, and Jay Simpson. I'd expect Derrick Jones and Josh Yaro to be in the gameday eleven after their respective returns from national team duty and injury.

• Oguchi Onyewu passed concussion protocol and is cleared to play.
• Fabian Herbers did not train Tuesday. He's expected to resume practicing next week.
• Warren Creavalle also did not train. He's a bit further ahead of Herbers right now but will be questionable for the weekend.
• Chris Pontius was experiencing breathing issues but tests did not reveal any concerns.

Meantime, captain Alejandro Bedoya is recovering from a hamstring tweak he suffered after taking a tumble during the United States' World Cup qualifying win against Trinidad and Tobago.

Alejandro Bedoya over here getting tripped by ghosts or blown over by Lance Stephenson #USAvsTRI #USMNT @ussoccer pic.twitter.com/6yRGFBiUtE

U.S. head coach Bruce Arena held Bedoya out of the 1-1 draw against Mexico on Sunday night. Curtin says he's hopeful that the midfielder will be available for Sunday's home game against Red Bull.

I wrote on Monday about the lack of excitement and enthusiasm surrounding Wednesday night's game.

While there isn't much buzz around another Philly/Harrisburg matchup, the games are usually entertaining and intriguing.

"Last year we were lucky," Curtin said at his weekly press conference. "We got bailed out by, if you remember the call at the top of the box, it wasn't a foul on (Sebastien Le Toux) but he makes it look like a foul. Then Roland bails us out with a free kick. At that stage, it's the perfect of example of a game where we went up 2-0 and started to get a little comfortable, cute, and casual. They score one, they get the second, then, all of a sudden, they have all of the momentum in the world. To be honest, we were lucky on that day to escape."

For Harrisburg, this will be the 12th time they've played an MLS opponent in the Open Cup.

When it comes to game film or motivation, head coach Bill Becher doesn't put a ton of stock in those prior matchups with the Union, but he does point out his club's history against higher division opponents.

"We're 5-6 all-time against MLS teams," Becher told PhillyVoice. "You can talk about that (with your players). You can talk about those close calls against the Union, but at the end of the day, they don't really mean anything. Going into this game, maybe it can give the guys some insight into, 'hey, if we work hard and do the right things, we can give ourselves a chance.' But that's all it really is. There's not much you can take from them, to say, hey, 'this is gonna help us win this game.' We have to show up and play well and we know we have to be at our best to have a chance.

"We've been able to step up in these games, and like I said, we've won five of them. And we've had chances to win (in Philly). Last year we were fortunate to take that game to stoppage time and score two late goals. But 2014 we should have won. We dominated that game and then in the 89th minute, they tied it. In 2012 they beat us, then last year I think we were fortunate to tie it and bring that game back to 2-2."

The Union and Harrisburg were affiliated until the creation of Bethlehem Steel at the end of 2015.

It was a partnership that made sense on some levels but was lacking in other areas. Philadelphia loaned three or four players to Harrisburg every year, some who played meaningful minutes and some who did not. Sheanon Williams and Richie Marquez are the best examples of that relationship helping both teams equally.

As the story goes, the Union initially showed interest in absorbing Harrisburg into their setup and expanding on the partnership that had existed since 2010. Infrastructure concerns, specifically getting Harrisburg into a new stadium, were ultimately what derailed those talks.

Former Union CEO Nick Sakiewicz said this about the Harrisburg partnership back in August of 2015, on the day that Bethlehem Steel was unveiled as the Union's new USL club:

"Up until maybe March (of 2015) or so, we were in discussions with Harrisburg to find a venue for them and partner with them, to integrate them into our system and either move the team or get a stadium solution for them in Harrisburg. That was the key. I don’t know if you’ve been to a Harrisburg game, but that stadium is just not good. I mean, it’s just not good. We couldn’t ‘get there’ on (the stadium). Down the road, we really started to explore opportunities elsewhere, and I think Harrisburg has found a stadium solution there, I’m not sure. But right around March, we decided to go our separate ways and do it on our own and invest in it ourselves."

It didn't seem like there was bad blood at the time, and Curtin touched on that Tuesday.

"I can't speak for the people above my pay grade because I don't know about all of the meetings and things that went on," the head coach said. "I know they did try to make something work, longer term, and it just didn't come to fruition. But my relationship with Bill Becher has always been a good one. Both of us were in a situation where we would just do whatever made the most sense, and do what we were told and make it work as best as we could.

"Even dating back to before I was the head coach, there's always been a relationship there. There was a sharing of players, maybe not in an ideal sense for either side, if I'm being honest. But it's worked out well that we have Bethlehem, obviously, they're ours, so it makes it cleaner and smoother with everything. I do wish Bethlehem could enter this competition. That would be a great thing as well."

"There's no ill-will on my end. I can't speak for how everything went down because I'm not privy to that information."