Philadelphia and Harrisburg both irked by 'redundant' nature of the U.S. Open Cup 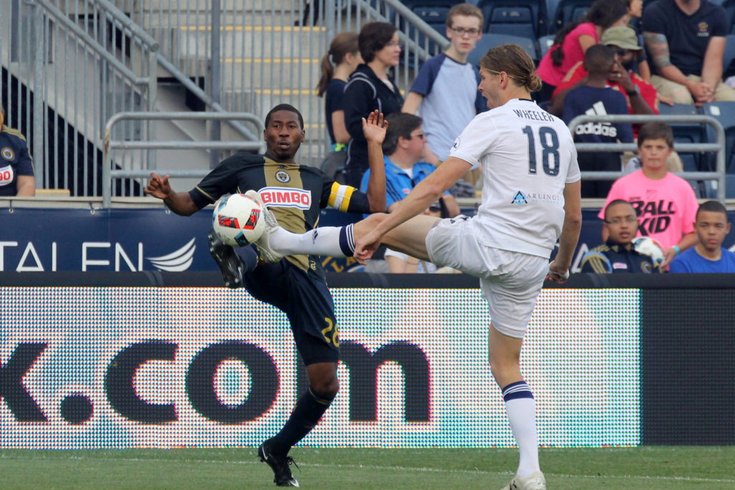 On Wednesday, the Philadelphia Union will host Harrisburg in the U.S. Open Cup for the fourth time in six years.

It was one year ago that the Philadelphia Union blew a two-goal home lead, relying on a stoppage time Roland Alberg free kick to dispatch the Harrisburg City Islanders in the fourth round of the U.S. Open Cup.

That was two years after Philly needed an 89th-minute equalizer and two extra time goals to get past their former affiliate club, also at Talen Energy Stadium.

And in 2012, a Harrisburg team that was 72 hours removed from a weekend doubleheader in Florida and South Carolina rallied from three goals down before eventually falling apart against the superior MLS team.

This Wednesday, the magic of the U.S. Open Cup brings Harrisburg to Philadelphia for the fourth time in six years, but both sides are worn out with the matchup.

"You wish the Open Cup would be a little more open, and you could have a little more change in the opponents," Union head coach Jim Curtin said recently. "We already know that if we win this one we'll probably play Red Bull again or NYC FC. It does lose a little luster and I'm sure Harrisburg feels the same way. They're probably tired of playing us."

"We just played Reading for the fourth time," Becher said. "And Reading is a good team. We have to go through them to get to this game, and I agree that the regionalization of it makes sense, but New York, New England, and D.C. are all close enough. We could play any of those teams."

For context, here's the Union's Open Cup schedule, dating back to the 2010 expansion year:

Philly has never played a cup game against Richmond, Charleston, Charlotte, Carolina, any team from Florida, or a lower division Midwestern club like Saint Louis, Indy Eleven, Cincinnati, or Louisville.

Likewise, Harrisburg plays the same teams every year as well:

It's much of the same.

You see Reading, Philly, and a lot of New York teams in that fixture list dating back to 2010. If you go back even further, to the years predating the Union, you see more matchups with D.C., New England, and Maryland-based lower division clubs.

The regional play might be stale, but it makes a ton of sense for smaller teams that just don't have the money to travel.

Reading, for instance, isn't putting 18 players on a plane to San Jose. It can, however, take a 64-mile bus trip down the Pennsylvania Turnpike.

"I get it," said Curtin. "There's a financial side to it, but – (pauses) - It's just redundant. It becomes a situation where it's not exciting for the fans. It's the same thing, and it's almost, before the competition even starts, it's like a schedule (exists). It loses a little bit of pizazz. It's not on TV the way you would like it do be. Listen, there are still only two trophies in our country that you can lift. I know U.S. Soccer has a lot of responsibilities and focuses on different things, but you would like to get it to a point where the matchups weren't the same over and over. Yes, it could be regional, but maybe could we play a team from... a different part of the region? I still think you can keep it regional, but the matchups seem so 'selected' already. You just lose a bit of buzz for the fans, I think."

Curtin is correct when he suggests that there are ways to keep the competition regional while also switching things up a bit.

For instance, this is what the 2017 fourth-round matchups in the northeast look like:

There isn't a ton of wiggle room, but you could theoretically send Rochester to New York, Harrisburg to New England, and let Philly play against Christos instead of D.C. The travel really isn't that much worse, and you do break-up some of the lifeless matchups we see every year. It also sets you up for that big New York derby in the quarterfinals.

"Philly could play – and some teams aren't obliged to – but you've got Richmond, Pittsburgh, and Rochester," Becher explained. "There are enough teams in our league that are close, too. They could match it up a little differently. I don't know why you keep playing the same teams. There could easily be a rotation in this area."

Becher also admits that it's harder to go that route in other parts of the country.

"You don't have as many teams, which makes it tougher for them to make the matchups, to vary them," he added. "But here, I just don't see why it can't be done."

Another idea is to send MLS teams to the lower division clubs instead. Harrisburg at Talen might be monotonous, but having Philly go to the Skyline Sports Complex would be interesting. Likewise, seeing the Revs in Rochester would be a nice change of pace and give Rhinos fans something to look forward to.

Most MLS teams are barely scraping a few thousand fans for USOC attendance anyway. These games get lost in a summer schedule that usually includes international friendlies, vacation, Jersey Shore weekends, or your daughter's U13 tournament at Fort Dix.

Another thing that hurts is that some USL clubs are banned from the Open Cup because of their MLS ties. Bethlehem Steel, for instance, is not allowed in the competition because the club is owned by the Union. This also removes from the tournament Red Bull II, Orlando City B, and five other teams on the other side of the country.

This doesn't affect affiliate clubs, which is why Richmond, a D.C. United partner, is still allowed to play in the U.S. Open Cup.

The irony of all of this is that Harrisburg always plays the Union incredibly tough. The games are always entertaining.

But both coaches are right; it's becoming redundant.