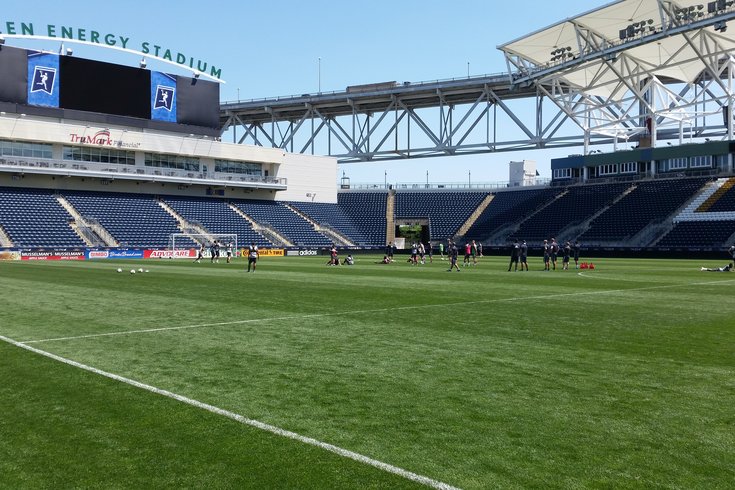 Did anybody think the Philadelphia Union would enter the Copa America break atop the Eastern Conference?

They can do it with a win against Columbus on Wednesday night.

Fresh off a vicious, two-game road trip, the Union will play their third match in eight days, welcoming in a Crew team they beat 2-1 at MAPFRE Stadium back in March.

Jim Curtin's team is on a seven-game unbeaten streak and can set a franchise record of eight matches without a loss if they pull off a positive result against Columbus.

Here are a few notes from Tuesday's training session.

• Josh Yaro missed practice while undergoing a MRI on his injured shoulder. Curtin expressed optimism that the rookie center back will not be sidelined for a significant amount of time.

• Maurice Edu was chipping balls off the crossbar after the session. It might not sound significant, but this is the most force he's put into striking a ball since last season. There's still no timeframe for his return.

• Vince Nogueira and Ilsinho both appeared to be full participants in training. After the session, Ilsinho and Roland Alberg did a very brief series of agility and "push off" exercises with sports science director Garrison Draper. Think of it as a shuttle run with only half the amount of cutting and turning. Alberg is not hurt, but Ilsinho is still trying to reach full fitness from a quad injury.

• Earnie Stewart apologized to the players for the condition of the field at Talen Energy Stadium, which hosted college lacrosse this weekend. It's not necessary for Stewart to apologize for something he has no control over, but it does show the level of professionalism and care he has committed to the club this season. The sections of the field that look a bit more beat up than usual are right around the 18-yard lines, where those heavy lacrosse goals were placed-

Matt Jones gets the nod

With Andre Blake on international duty, Curtin confirmed on Tuesday that Matt Jones will make his Union debut against the Crew.

Jones joined the Union in the offseason after six years in Portugal.

In the decision to start Jones over second-year goalkeeper John McCarthy, Curtin said he deferred to the judgment of goalkeeping coach Oka Nikolov.

"First and foremost, Oka Nikolov is who I lean on for that," Curtin explained. "I'm not a goalkeeping expert. I can pick out a good one when I see one, and we have three good ones. Oka has the nuance of being with them every day, to see the little things that maybe I can't pick up. Experience weighs into it, and the amount of professional games (you've played) weighs into it. They're two good goalkeepers who are performing well in training. I leaned on Oka for the decision and the choice is Matt Jones."

Jones is British by birth but played college soccer in the United States. He moved to the Portuguese 2nd division in 2009, then secured the starting job for top flight team Belensenses in 2012. He joined the Union on loan at the beginning of the season.

"Obviously, it was an adjustment for me at the start of the season," Jones said on Tuesday. "Pretty much everywhere I've been in my career so far, I've been the number one. But I knew the situation coming in. Obviously, Andre has taken his chance and he's put together a great start to the season, so I'm more than happy for him. Hopefully, it's just the start of his career and he can go on from here. It's one of those things, as a goalkeeper, where it's been frustrating. Everybody wants to play. John McCarthy wants to play. It's frustrating to sit on the bench but you just have to be patient and wait for your chance and take it when it comes."

Jim Curtin, father of three, offered this advice to Matt Jones (who will make his MLS debut tomorrow) on having his first kid: "Good luck."

Center back Ken Tribbett was a surprise starter in the season opener. Then, an April ankle injury kept him off the field for close for seven weeks while rookie Josh Yaro began to establish himself in the Union rearguard.

When Yaro left last Wednesday's game with that shoulder injury, Tribbett stepped up in a big way. The Drexel alumnus played 45 minutes of solid defense and tallied his first professional goal and assist in the 2-2 draw.

Ken Tribbett: (laughs) That I wasn't so sure of. But anytime I can help the team in any way, I'm going to do it.

PhillyVoice: What do you think about the secondary assist anyway? Do you think it should count if you're just lumping a restart at the far post?

Tribbett: Of course! (laughs). I mean, for me, statistics help, and in America especially, people judge you on stats. If I can get something like that, I'll take it any day.

PhillyVoice: Last year this team didn't have the ability to send players down to Bethlehem Steel, but you got some decent rehab minutes playing for the second team. How important were those minutes in helping you get back to full health and fitness?

Tribbett: It's very important. A lot of our guys from the first team go down and play. It's always important to get minutes and reps in real game scenarios. Training is important, and we have a good training atmosphere, but you can't replicate a game. So anytime you can go and (play at) whatever level, and USL is a great level, I played there last year. When we go down there it helps us get our legs and our fitness and everything about it is important.